It’s time to dial the cuteness factor up to eleven – I watched my first Studio Ghibli film in years last night: My Neighbour Totoro!

This is a 1988 film directed by Hayao Miyazaki, one of the co-founders of the famous anime studio. It tells the tale of two girls and their adventures with friendly wood spirits in postwar Japan, and is just absolutely adorable!

Satsuki and Mei Kusakabe move to the country with their father, a college professor, while their mother recovers from an unspecified illness at a local hospital. While Satsuki is off in school, Mei has a bit of an adventure when she follows a pair of bunny-like creatures from the house into the woods, where she finds the massive Totoro – unfairly called a “troll” in the dubbed film, but he’s nothing like the trolls of the Western world.

The film follows the two girls as they go about their lives with these wood spirits nearby, until news comes from the hospital that their mother has taken a turn for the worse. Mei is upset, and Satsuki lashes out at her, which prompts the toddler to, well, toddle off. The community comes together trying to find her, and Satsuki eventually finds her sister with the help of Totoro and his creepy giant cat-bus. Well, I thought it was creepy, with the forced grin and all, but anyway. All is soon put right, and during the end credits we see the family reunited once again, so all ends happily. 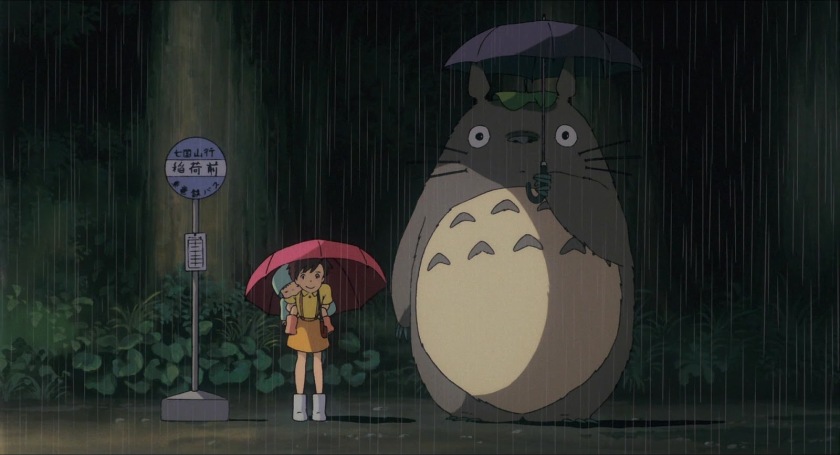 I loved this film! I first saw a Studio Ghibli film back in 2008 or 2009, but after maybe half a dozen of them, I hadn’t watched one since. My Neighbour Totoro is therefore the first such film I’ve watched in about six years – now there’s a thought! While I was watching it, somewhere within me a jaded, cynical voice was decrying this would be a 90-minute parade of cute that I really don’t go in for, but within minutes I was just along for the ride, enjoying the sense of wonder that the film manages to evoke. My need for a Totoro plushie increased tenfold as the film wore on.

As we follow Mei through the looking glass, something that came over quite strongly to me was that sense of adventure I’d have as a kid, where I was more interested in seeing where a path went, or “what would happen if…”, than I was in staying clean (and, possibly, safe!) It’s something that we don’t really see anymore, which has been described as a sign of the times as kids don’t generally go off and have adventures like this. Shame, really.

This is a truly delightful film, with an adorable quotient that manages to beat back any cynicism without the overriding waves of cute that, in my experience, often marks out Disney. That, and the strong sense of nostalgia for ‘a simpler time’, contribute to make it one of the best films I’ve watched this year. Definitely worth the watch!