Hey everybody!
The last week or so has been filled with lots of awesome, predominantly from getting back to the amazing Legend of Drizzt series!

I finally got back to this series, after a nearly two-year hiatus, back in March, when I read the end of book 6, and moved onto book 7, The Legacy. That was a really great read, you can see more on that here, but I didn’t move on to the next one until now. I don’t actually remember if there was a reason, but anyway. Spoilers incoming! Starless Night picks up the story of Drizzt and his friends in the wake of Wulfgar’s death, and begins as Drizzt decides to return to Menzoberranzan, to avoid any further drow incursions into Mithral Hall. Little does he know that Matron Baenre plots the destruction of the dwarven kingdom no matter what, of course, as we saw briefly in the last book. Catti-brie discovers Drizzt has gone and, determined not to see another of her friends needlessly die, heads off in pursuit. The two eventually meet up in the Underdark, and manage to escape the Baenre compound with the help of none other than Artemis Entreri, though their hearts are heavy with the knowledge that the drow are amassing for war against the dwarves.

While I enjoyed The Legacy, after all that time spent on the surface, I loved Starless Night. It is perhaps a little formulaic at parts, but as always with these Drizzt books, the execution is just amazing. Salvatore continues to develop the Underdark beyond what we have already seen from the Dark Elf trilogy, this time particularly as we get to see more inside House Baenre, the first house of Menzoberranzan. The Matron Mother is just as cruel and twisted as you’d expect, as are some of her children. Most interesting among them are Dantrag, the weapons master who wields a sentient sword. It was a shame that he didn’t make it through the book, but I suppose there’s little else you could do with a character like that. Triel Baenre, the mistress mother of Arach-Tinilith, is another intriguing character, and her scenes with the flamboyant mercenary Jarlaxle were always fun to read. Jarlaxle has a prominent role to play here as well, which serves to deepen his character.

The whole story was pretty great, with a terrific sense of foreboding, or “things are about to happen tonight”. Weirdly, I kept feeling a comparison with the finale to the third Harry Potter book, with that sense of wheels being in motion and whatnot. It was a great read, and I’ve since propelled myself into the ninth book, Siege of Darkness, which has been excellent so far – look out for that one to grace this blog very soon!

The Beetroot Beefburgers, man they were good…

Saturday was, of course, Independence Day, so to celebrate(?), I made burgers and watched American Dad. Not just any burgers, however! I came across a recipe somewhere for beetroot beefburgers and, being a lover of beetroot, had to give it a try! On reflection, I probably used too much, so they were a tad dry, but overall they were really good, and I will definitely be trying these again! Grating beetroot into the minced beef left my kitchen looking something like a crime scene, but even so! Very simple to make, just grate the beets into the beef (I used three with 200g of mince, one might be a better idea), mix in an egg, and away we go!

In the middle of dozens of other projects, there's always time for more #Necrons #Warhammer40k #Immortals #TrazynTheInfinite

Despite having multiple projects on the go already, this weekend also saw me make up some more Necron Immortals, along with Trazyn the Infinite. I’ve been slowly getting back into painting, as I’ve been trying to finish off the Canoptek Wraiths I started over a month ago. I’ve not gotten very far, unfortunately, but that seems to be the story of my life where big stuff is concerned – bigger than your average foot soldier, that is. I’ve had four Tomb Blades awaiting their finishing touches for ages now, as well. As I seem to be better at getting the smaller guys finished, I thought I’d make up some more, get them done, and then (hopefully!) get back into the swing of things that way. Miniatures painting is something that I really enjoy, after all, but has felt more akin to a drudgery of late. 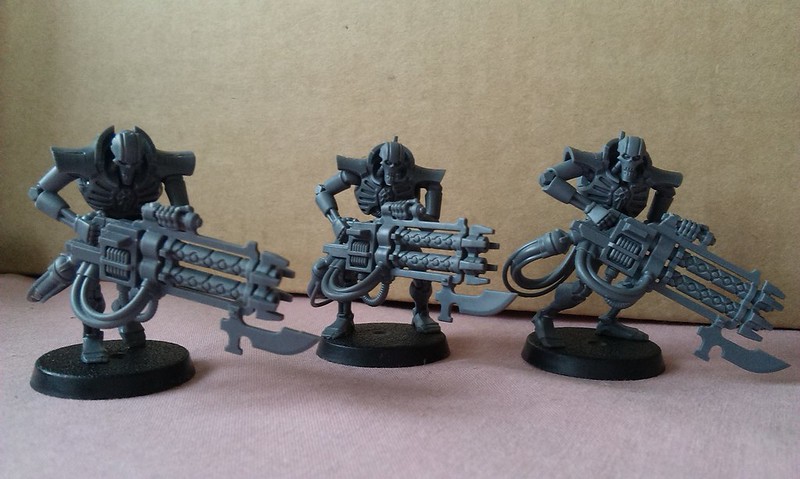 Trazyn the Infinite is perhaps the most hilarious of the special character models, with his backstory of wanting to preserve everything in the universe in his own collection. If I remember rightly, he has some weird ability that allows you to replace him with any other member of the unit he’s attached to when in combat, due to some kind of phase-shifting technology. He seems interesting, but more than that, I enjoy the special models for the fact that I can paint them with different colour schemes and such. That said, I’m considering doing something different with the Immortals this time, as well – the new golden paints coming out soon look very interesting, after all, so I think I might try something more special with these guys… 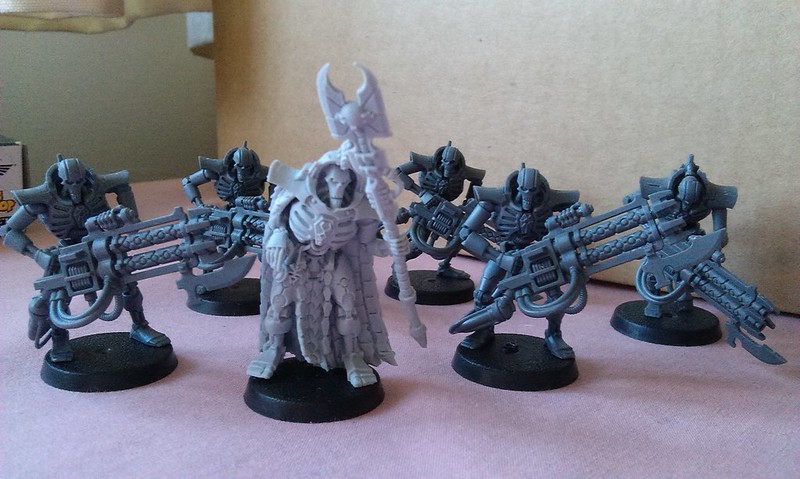 This week has been pretty good for games, of course. Along with the announcements of new cycles for both Android Netrunner and Star Wars, we’ve had a new data pack for Netrunner as well as the inaugural pack in the Angmar Awakened cycle for Lord of the Rings! There’s an interesting day/night mechanic in this one, and I cannot wait to try it out, but feel like I need to first play through the Lost Realm box. I’ve got all the quests sleeved now, anyway, so I’m ready to go on that front. No doubt there’ll be some posts here where I bemoan my performance…

I actually got a few games of Netrunner in at the local store again last week, with my tried and trusted Shaper deck, and lost both. But they were fantastic losses, so I can’t complain! Very thematic, so definitely lots of fun. I feel like I want to try out new decks now, however, as I spent one night reorganising my entire Netrunner collection. I usually keep LCGs in their expansion boxes, as it’s convenient and I like the packaging, but now FFG has moved to this horrible plastic nonsense, I’ve decided to change that, and have instead gone for keeping the entire cardpool in both core set boxes (I’m one of these who bought two core sets). So far it works, but I foresee a time very soon where I’m going to run out of space there, as well! Hm. At any rate, going through that reorganisation, and seeing the entire card pool for each faction all at once, has really opened up my eyes to the deckbuilding possibilities in the game, so I’m keen to explore with that, rather than continually playing my one Shaper deck.

We’ll see just how splendidly that works out, anyway…