Yes folks, the New Age is upon us! 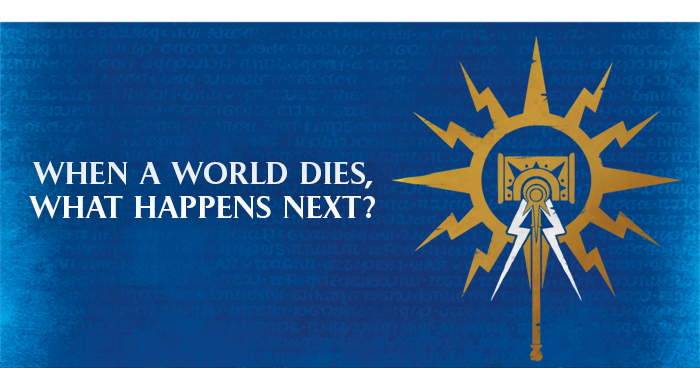 Back in September last year, the Old World of Warhammer was shaken up with the End Times, which brought back Nagash and saw the destruction of the cities and peoples of the Empire by the forces of Chaos, headed by Archaon the Everchosen. The End Times extravaganza finished in March, with Chaos triumphant, and – officially, at least – Warhammer Fantasy Battles seemed finished. What could happen next?

The internets was rife with rumours of 9th edition long before the cataclysmic events of End Times: Archaon, of course, but as things began to solidify, this Age of Sigmar thing turned into a completely new game. Rage-quitters abound, but now, it seems like everyone was just a little bit wrong.

I was lucky enough to grab this yesterday, and have been perusing it over breakfast this morning. I have to say, things look pretty exciting for Warhammer right now! Seems like a whole new world is being created, and it looks infinitely expandable. Don’t just rush out to pick up this week’s White Dwarf for the free miniature stuck to the cover – read it, and you’ll see what I mean. Very exciting things look to be on the horizon, I must say.

Reading the lore, I was struck by two things. First was the futility of Chaos. It’s something similar to what seems to be the Tyranid problem – when a destructive force has destroyed everything else, what will it do next? It always feels like something that hasn’t really been thought out properly. Also, Sigmar seems like a bit of a jerk. Having brought peace to the new realms he discovered, as soon as Chaos finds them he basically bolts the door and leaves everyone to it.

Luckily, he manages to maintain his heroic-legendary status when he brings forth his Stormcast Eternals, the wonderfully golden guys resplendent on the cover of this week’s White Dwarf. The battle that follows is interestingly referred to as the first chapter, so I’m wondering what happens next…

There are also three new paints coming next week, including a brighter base gold called Retributor Armour. Always nice to have more options!