Hey everybody!
It’s June 20th, so that means: Free RPG Day! It’s the eighth such day this year, where publishers print small modules or adventures designed to grow the number of folks playing RPGs, which I think is just superb! I’m celebrating by taking a look at the brand-new Force and Destiny beginner game from Fantasy Flight Games!

The third and final iteration of their Star Wars RPG line, Force and Destiny brings Force-users into the game properly (previous rulebooks included basic information on Force-users, but this is where you really get the meat for such characters).

The beginner game features two books, including a pared-down version of the rulebook (which will be out later in the summer, if they hold true to form), along with an adventure book that details how the beginner game unfolds. Alongside this, there is a short pamphlet that features an introduction to the game, including an iconic opening crawl to be read beforehand: 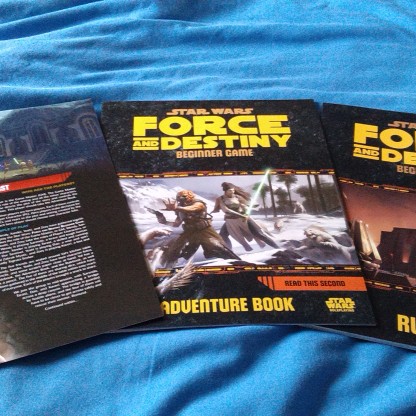 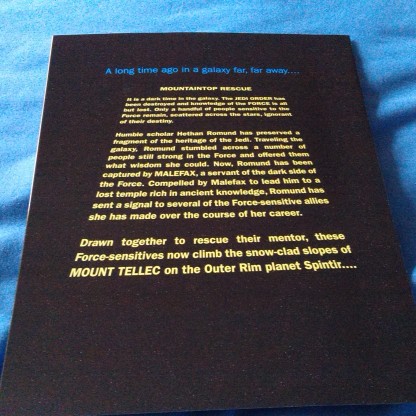 All of that is aimed at the Games Master. There are also four character “folios”, pre-generated characters designed to let players get into the game without going through character generation for themselves (this usually forms the bulk of the rulebook, after all): 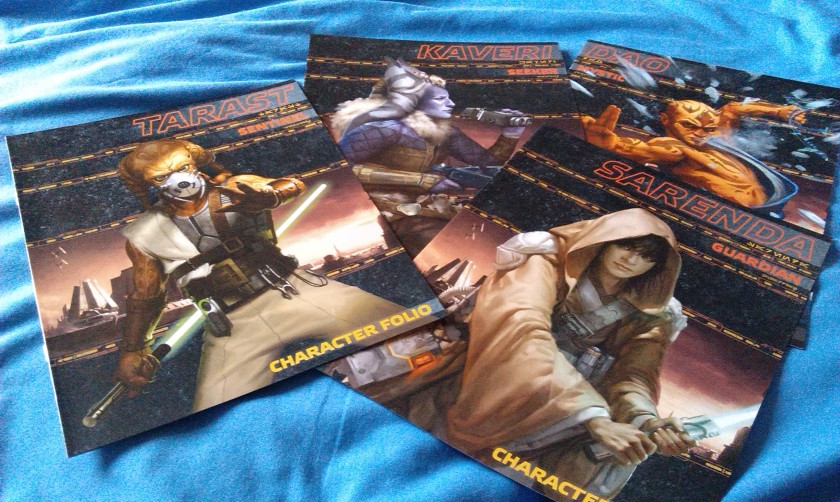 And finally, we have maps, tokens, and specialist dice: 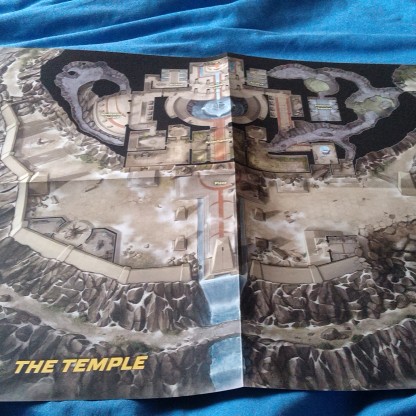 As with all Fantasy Flight products, this game looks beautiful. I believe the beginner games are pretty basic, designed more to give players the introduction to the game than to really set the world on fire, and most people seem to get them for the maps and, at one time, as an easier way to get more dice.

FFG’s Star Wars RPG uses custom dice designed to make things easier to tell the story, rather than simply focusing on numerical targets as with the Saga Edition RPG, for instance. So you roll to see if you succeed at a test, and the dice will not only tell you that, but also just how well you succeeded or failed. Or you might succeed, but something else goes wrong. It sounds like a really excellent way to tell the story, and I’m hoping that it won’t be too long before I can get to try this out for myself!

The adventure features seven encounters designed to tell the story of a rescue mission undertaken by the four heroes who have folios in the box. The first four are fairly straightforward things, designed to get new players (including new GMs) comfortable with the RPG experience. There is an interlude, which demonstrates levelling-up a character, and while it’s not online yet, there is also mention of a follow-up mission called Lure of the Lost, as well as two more character folios for download. This follows the previous Beginner Games with having more content while we wait for the main core rules to arrive.

The rulebook here is a mere 48 pages long, so around 400 pages shorter than the main core rules will be! It features just enough information that should allow players to have further adventures with the system beyond that included in the adventure book, so we have rules for talents and equipment, as well as NPC adversaries the GM can throw at the players. The map is double-sided, so you can play with different locations if you so wish, as well.

All in all, it’s a great little product that should get people up and running in the game system, even providing stuff to allow you to go beyond with more adventures. Obviously it’s no substitute for the core rulebook, but it’ll do the job for new players while providing veterans with enough to keep them going. Highly recommended! 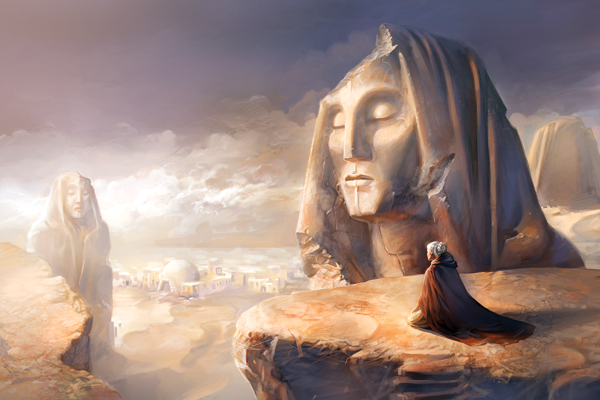 If you’re wondering just what the hell all this RPG stuff is all about, and struggling to see how rolling some dice can be any fun whatsoever without any kind of board or card additions, then I suppose this is the ideal opportunity to show you this. Following on from the success of Tabletop, Wil Wheaton has now got the fabled RPG show up and running, Titansgrave! I finally got round to watching the first two chapters last night, and it was insanely good – take a look here if you don’t believe me!

Titansgrave sounds like a truly great series, it definitely has the right sort of folks to make it a classic for me, at any rate. Certainly looking forward to seeing how the series shapes up from here on, anyway!