Lagoon is the first world that ever was. Boundless spiritual energy flows through the land, and is the source of all the world’s magic. This divine energy nurtures the deepest, most ancient, and magical forests in all of creation. Lagoon’s eldest forest creatures awoke long ago, and are endowed with ancient wisdom and primeval power.

Got home to this today! Yay! Obviously not literally this; packaging was involved… #games @3haresgames pic.twitter.com/KZVxCtRvhh

So I’ve finally gotten around to playing Lagoon, over seven months since it made its way into my grubby little hands!

I did a blog on Lagoon back in July, which was a sort of first-look kind of event, albeit one where I hadn’t actually seen the thing! You can read that here, anyway, though aside from sharing some of the gorgeous artwork that’s in the game, now that I’ve played it, I don’t really think there’s much value in that prior blog. 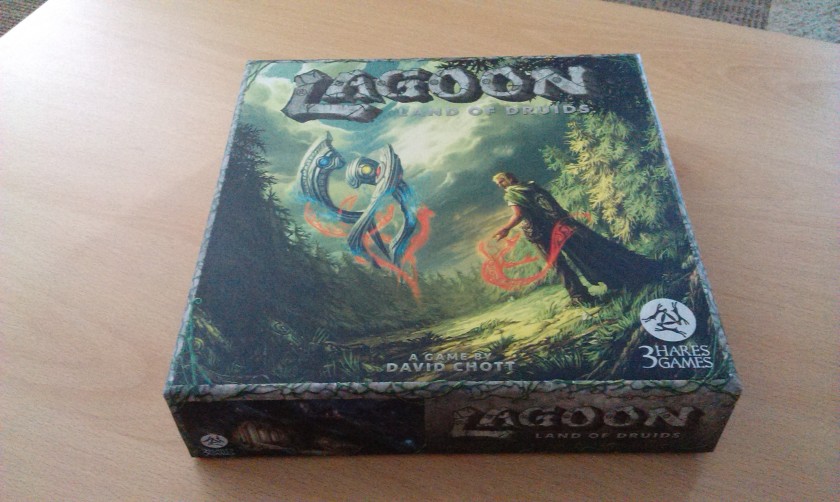 This is because the gameplay feels so different to how I originally thought it would – in the best possible way, I might add! I originally had the idea that the game was some kind of area-control thing, but that’s not exactly how the game works. Let’s take a look… 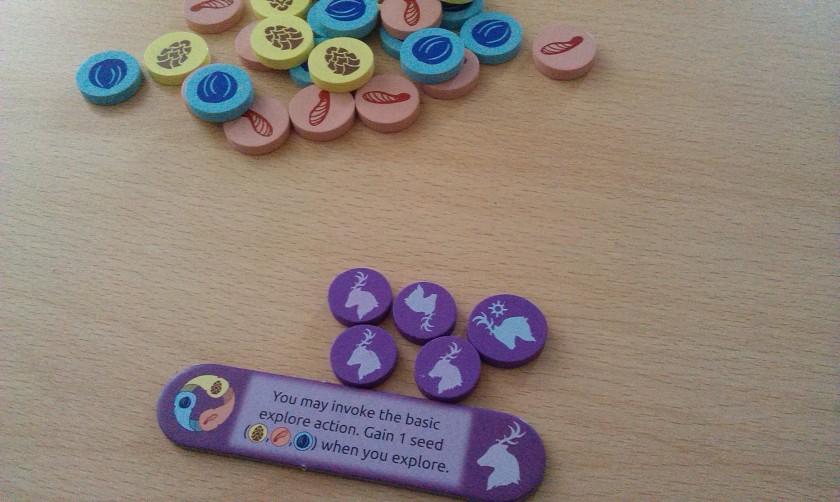 There are four druid paths that each have two circles within them. You pick a path to follow, and a circle to belong to, and that essentially forms your faction for the game. In the picture above, I’m playing the Stag circle, on the Path of Adventure – for reasons largely unconnected with the actual game, but anyway! All of my games so far have been single-player, as I’ve been getting the hang of it and so forth, but that’s not really an issue for now. However, it probably is worth pointing out that I have the kickstarter version of the game, so I have wooden tokens rather than card ones. Anyhow! Your circle comes with four acolyte (small) druids and one Eldrid, an elder druid denoted by the larger token (the one with the star on it). Finally, you have a player marker which shows if you use the basic explore action – more shortly. Also shown in the picture above are the seed tokens – more on them shortly, as well. 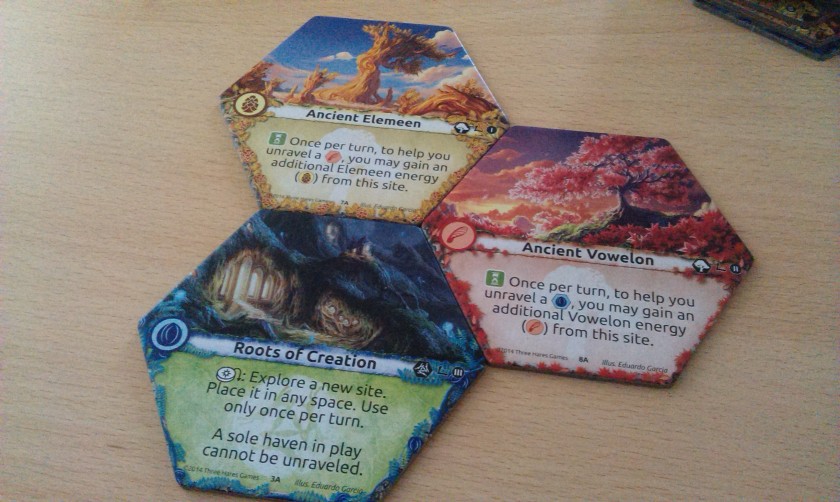 There are three types of hex tiles in the game, which follow the three energy types of Elemeen (yellow), Vowelon (red) and Deonin (blue). These tiles are called sites. There are additionally five types of sites, denoted by the symbol to the right of the name – for the base game, there is only one site that has any relevance, the haven site (shown by the company logo and also with a green tint to the text box), but future expansions are promised within the rules, which will use these types in some way.

For set-up, you need one tile for each colour, and one must be a haven. The remaining tiles are shuffled together and placed in a draw bag, and each player places one of their acolyte druids along with their Eldrid on the starting haven, and the game is ready to begin!

During your turn, you may perform as many actions as you are capable of, before play passes to the next player. Incidentally, the starting player choice is made by the person who most recently visited a forest going first – I always enjoy it when creative first-player choices are involved in games! Anyway. What are these actions? I hear you cry. Well, there are three basic actions you can play: move, summon and explore. When you move, you literally move a druid to an adjacent hex tile and flip it over to show it has taken an action. To summon, you move a druid from your supply onto a haven tile, flipping it over as you cannot take an action with that druid on the turn it entered play.

To explore, however, you draw a tile from the bag and place it adjacent to the others. All of the tiles in Lagoon are double-sided, and you get to choose which side you place. You then move a druid to the new site, flipping it to show it has taken an action that turn. You also flip your player marker to show you have used the explore action. Finally, you gain a seed token that matches the colour of the tile you just placed. 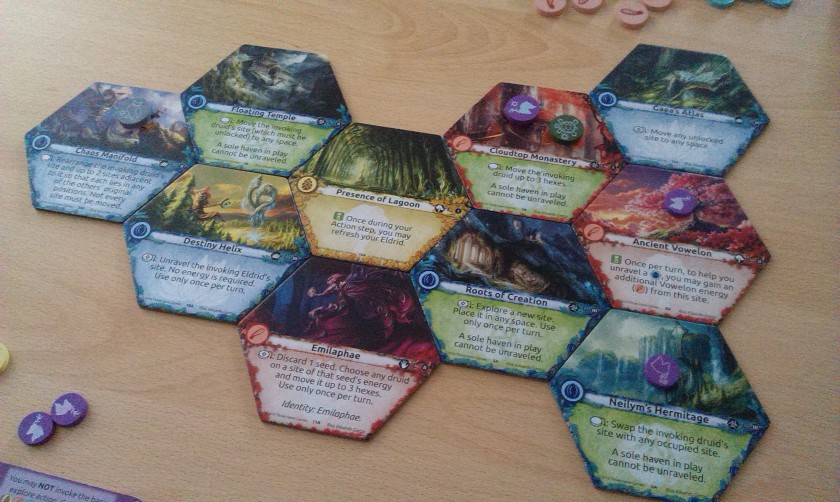 In addition to the three basic actions, sites will have specific actions they will allow if you have a controlling druid there. These vary from actions any druid can take, actions only your Eldrid can take, to actions that occur at a specific time (‘timely actions’, denoted by a green hourglass) and actions that will only happen once, as the tile is placed during the explore action (denoted by a green lightning-bolt). Finally, there is the Unravel action, which allows you to remove a tile from play, providing it is not locked – that is, that it won’t result in a gap between tiles.

Unraveling is really at the heart of the game. The object of the game is to control Lagoon’s destiny by moving it towards one energy. At the end of the game, the colour that has the greatest number of tiles on the table is the dominant energy, and the person who benefits most from that is the winner. This is a fairly complicated process to explain, but there are player-aides that show it all clearly, so it isn’t a problem when you’re actually playing!

Let’s say I want to steer Lagoon’s destiny to the Elemeen energy (yellow). Energies react to each other in specific ways, and Deonin (blue) threatens Elemeen, so I will need to control blue locations in order to unravel yellow locations. If I ever have three blue energy, I can attempt to unravel a yellow site. Energy is granted both from occupying sites, and from the seed tokens gained during the explore action. Some sites have a timely action that grants you additional energy of the colour you’re trying to generate.

To unravel a site, then, I need to have a druid on the site in question, and control three energy on the opposing energy in order to make it work. When a site is unraveled, my druid is returned to my supply, and anyone else who was there is simply moved to the nearest haven. As said before, you can’t unravel a site if it would split the board in two, and you also cannot unravel the last remaining haven. At any rate, when the site is unraveled, it is placed in your score area.

When the last tile has been explored, the game ends and Lagoon’s destiny is decided! In cases of ties, again there are ways for the energies to overpower each other and emerge victorious. Returning to the previous example, if Lagoon’s destiny turns out to be Elemeen (yellow), everyone with a yellow seed token left in their supply will gain one point per token, and each red and blue site in the unraveled pile will gain them two points. The person with the most points wins!

For solo play, the rules are slightly different and involve a ‘dummy’ player (called AJ, in case you were wondering!) who has three Eldrids from each of the unused paths, along with all of the unused druids from those paths, and he just flits around the board exploring sites and trying to unravel as much as possible. The rules were a bit confusing at first, but ultimately they worked really well, and it results in a different play experience that is well worth checking out, even if you don’t normally like solo variants. 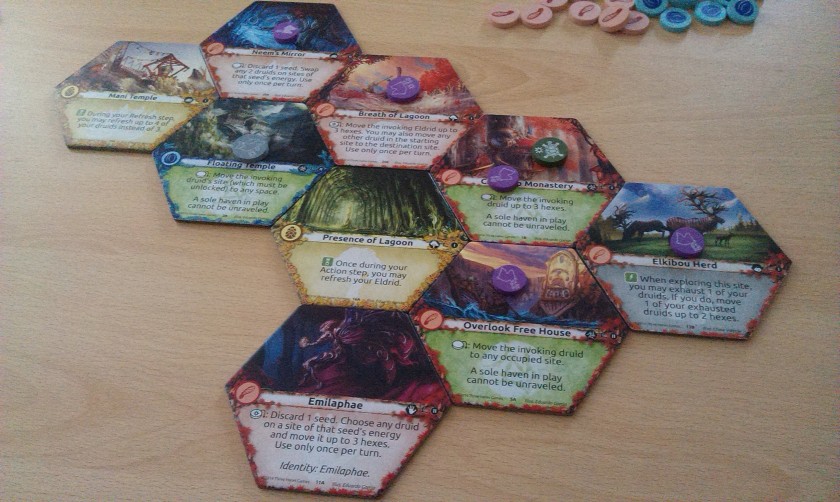 I can highly recommend this game. Every game that I feature on this blog is one that is within my personal collection, so to some extent I have a bias towards it, but nevertheless, this game in particular has such a unique feel to it that I can’t help but feel extremely positive towards it! It’s also beautiful – I mean, seriously, if I never played another game, I would be glad to have it in my collection just to look at it. It’s that good-looking.

First of all, it feels very different to any game that I have played before. It took me a while to get round to because I felt a little confused when I first took it out the box, because I expected to be playing as one of the energy colours. The whole business of unraveling sites to allow a different energy to dominate felt strange – it’s set-collecting but in a different way, I suppose!

There is also a very calming feel to the experience. I mean, it sounds like it could be a really bloodthirsty type of game, as you’re trying to remove tiles that other people might want to keep on the table, and such. But this is where I think the theme of the game comes through to give some much-needed peace to these types of games. Yes, it has elements of area control as you need to control specific colours to remove others, and other people might try to remove those colours from under you, but there is an ebb and flow to the game that feels very calm – at least, it does to me!

Unraveling is about as confrontational as the game gets, anyway. Druids co-exist on sites quite peacefully, and can both use the site effect on their turn if they so wish. Druids aren’t killed when the site they occupied is unraveled from beneath them, but go elsewhere in the world as they regroup. It feels like a much more harmonious way of playing a game, which I suppose some people won’t be too thrilled by, but it keeps you focused on the primary goal of determining the energy of Lagoon, and not always just killing people off for no actual game benefit.

Something else I like about the gameplay is how strategic it can be. In my second game, I was attempting to tip the balance to red, while AJ was exploring a lot of yellow (the solo rules instruct you to place tiles that will minimise any points you will get). The final turn saw AJ place a yellow tile, and unraveling a red one, thus tipping the balance to yellow. However, because of the way scoring works, I still won due to having unraveled a lot of the blue tiles. I always love games that can see the balance shift at the end game like this – when that red tile was taken away…oh my goodness! 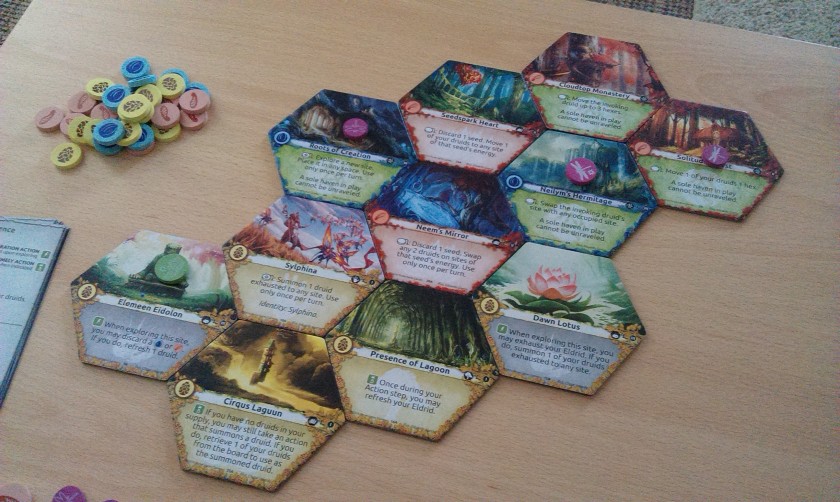 But anyway, there’s not a lot else I can say except buy it!