After the heady excitement of my Birthday Week, and the exploration of the Indiana Jones franchise, it’s back to Star Wars, my original true love, and some exciting news for gaming, following the Anaheim shenanigans last weekend!

Let’s start with Wave 7 for X-Wing! Releases for this game continue apace, as we get new ships for all three of the current factions. The K-Wing makes an appearance for the rebels, something I’ve been particularly pleased about since I’m a big fan of the Black Fleet Crisis trilogy. It also gets a new move, SLAM, which basically allows it to move twice, so long as both movements are at the same speed. The Imperials get the TIE Punisher, though most people will probably know it better as the TIE Interdictor from the Galactic Battlegrounds game. It’s basically an advanced version of the TIE Bomber (from Wave 3), and both this and the K-Wing have some pretty snazzy ordnance they bring to the table. Very useful is the Advanced Ordnance card, which lets you use missiles and bombs twice, so that’ll most likely become a staple!

Scum takes up half of this wave, which makes sense, given they’re still quite far behind the other factions so far. Black Sun’s Kihraxz fighter makes its appearance, which has got me excited to build a Black Sun squadron, and Trandoshan bounty hunter Bossk’s ship Hound’s Tooth rounds out the experience. He has the ability to escape his destroyed ship in the headhunter Nashtah Pup, which is a nice addition – I was surprised at first that we don’t actually get a headhunter model, but it would most likely drive the price of the expansion up to include it and, as was pointed out to me, most Scum players will have Most Wanted anyway.

So it’s a pretty exciting release, and since I’ve started to play this game, I’m really looking forward to it!

Speaking of X-Wing, we’ve also had a more in-depth look at the Imperial Raider, which I feel has been on the horizon for months already!

Announced back in December (I think – it seems longer!), it’s something that I’m pretty excited to get my hands on, even though I don’t foresee any epic play on the cards anytime soon. There are some interesting bits and pieces there, though – and who knows, now that the Imperials have a big ship as well, maybe we’ll see more epic play games…

More reinforcements have been announced for Imperial Assault, too. As someone mentioned on facebook, this is where the skirmish game really begins, and I can definitely see that. Up to now, we seem to have been having the lieutenant-like expansions similar to the Descent model, which basically replace tokens from the base game with actual miniatures, but with new chaps that we can bring to the table, it begins to feel much more like a miniatures battle game, much like the previous Star Wars Miniatures games from Wizards of the Coast and West End Games. Even though I haven’t been able to play with the base game yet, I’m hoping I can sell the idea to Tony with the skirmish side, then hook him in with the scenario-driven game. We shall see! 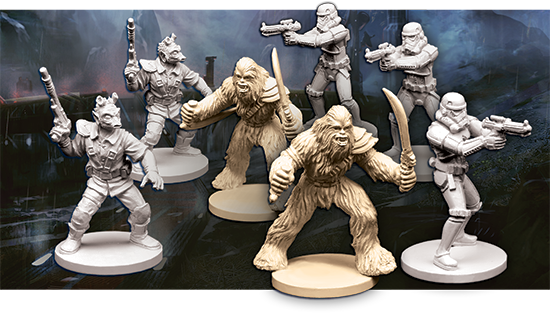 The miniatures do look great, though I’m not going to paint them – the manager at the local store has done his store copy, and that looks fantastic, but they’re too small and detailed for me!

Again, I’m pretty excited for these guys, even though I’ve yet to play the game. Star Wars Miniatures was one of my favourite games, back in the day – which is surprising, given that it’s got basically no story to it, and you’re just trying to wipe out your opponent before he wipes you out. But I played a lot of that game back in the day, and it’s really exciting to think we might get that sort of experience again, though on a much more sensible scale (as opposed to the blind-buy from Wizards).

So. Much. New. #StarWars pic.twitter.com/20rCjUSHbq

Making splendid use of my amazon vouchers, I’ve decided to go for the latest novels in hardcover. It seems Del Rey is moving to all their books coming out in hardcover now, so it’ll help to distinguish them from my now-Legends novels.