Yes, today is the international celebration of tabletop gaming, and to celebrate I’m writing this special edition of awesome: Runebound, Sands of Al-kalim! 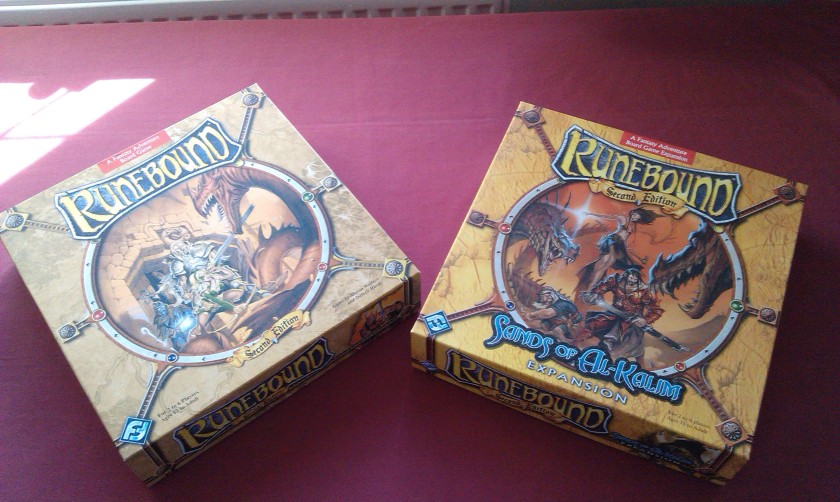 The third big-box expansion for Runebound, Sands of Al-kalim continues the theme of having a new environment to the Runebound universe. Whereas Island of Dread takes us on an island adventure, we delve into the Arabian-style desert lands for storytelling and adventure.

The object of this game is to collect a series of four legendary items, which you do through completing quests:

The quests can be either difficult or fairly easy, depending on where to draw them: you might be required to have encounters in separate cities at opposite ends of the board, or you may have to go to a section of the board that is actually quite close for an encounter. At any rate, once you’ve completed your quest, you gain the benefits of the Legendary artifact:

These things are pretty great, but obviously because of the victory condition these represent, there is a lot going on around them, particularly from the yellow encounter deck, forcing you to discard at least one Legendary artifact once you defeat the encounter. 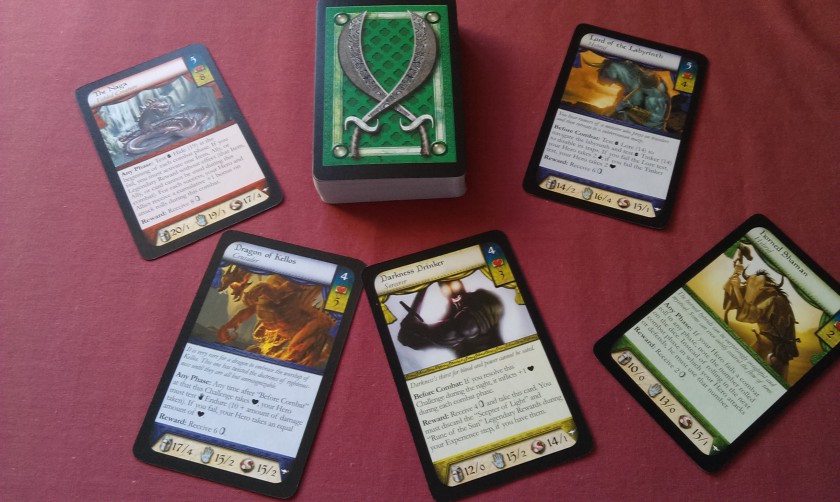 Another storytelling aspect comes from the story die, which you roll if you end your movement outside of a city space with no encounter jewel. An interesting aspect to the game, it gives you yet more to think about, and it’s implemented really well here. So you no longer get a free move for not having an encounter!

So we have this legendary/storytelling Thousand-and-One Nights feel to it all, but the game is set in the desert, so how does that come across? Well, awesomely!

There’s a new board, of course, and the dice results are used to represent different terrain, which I usually get confused by, but anyway. There are a couple of effects that you need to take into account when you play this, primarily whether you move in the day or the night. Moving during the day will be hotter, so you take exhaustion points there, and some terrain will mean you also take exhaustion. Further, there are no forests in the desert, so any forest results are classed as a “mirage” and cause yet more exhaustion! If you’d prefer to move during the night, you negate these effects, but enemies you encounter during the night are also a little more resilient, reflected in the cards in the above picture, with two life values for each card.

Because of all this exhaustion, there are a new series of Allies that you have to play with, who are a bit more hardy for the terrain! When you draw an ally from the normal market deck, you just discard it and draw from this deck instead. This adds a lot more theme to the game; whereas other big boxes only have a few market cards, while this has some really great cards to add to the experience!

There are also new heroes, of course:

Runebound has the distinction of having pretty much a perfect run of expansions, with each big box being pretty spectacular, and Sands of Al-kalim is definitely a wonderful experience. However, for me, it’s near the bottom of my list just because the other boxes are so much better. This is the first one with any kind of weather effect, and is so wonderfully implemented that you have a fantastically thematic experience, especially seeing how far that theme permeates the game. The themes of the later two boxes come in a similar way, but I find them personally more satisfying games.

It’s always good for a change, and Runebound is just such an awesome game that it’s always going to have thumbs-up, but Al-kalim is always a bit neglected by me because of the other games in the series!

One thought on “Tabletop Day Special!”