Tuesday means only one thing here at spalanz.com, and today we’re going retro! If you follow me on twitter, you’ll already have an idea of what I’m talking about (and if you don’t, why not?!)

So, this is happening #retro. #StarWars #games pic.twitter.com/DRWNgAPKfh

Escape from the Death Star is a co-operative game from 1990, published by the now-defunct West End Games. I had it as a Christmas present when I was 6 or 7, though looking back, I think I was probably a bit too young for it, so it went on the shelf (and eventually, the attic). The reason for this is that the game is a co-operative RPG-like adventure game, with a fair amount of bookkeeping to do as your turn progresses.

The game follows the 20-odd minute sequence from when Han, Luke and Chewie break Leia out from the detention block of the Death Star in A New Hope, in their efforts to return to the Falcon and flee the space station. The game represents this by its foldout map/board, and a colour-coded series of card decks that describe the encounters the heroes have. 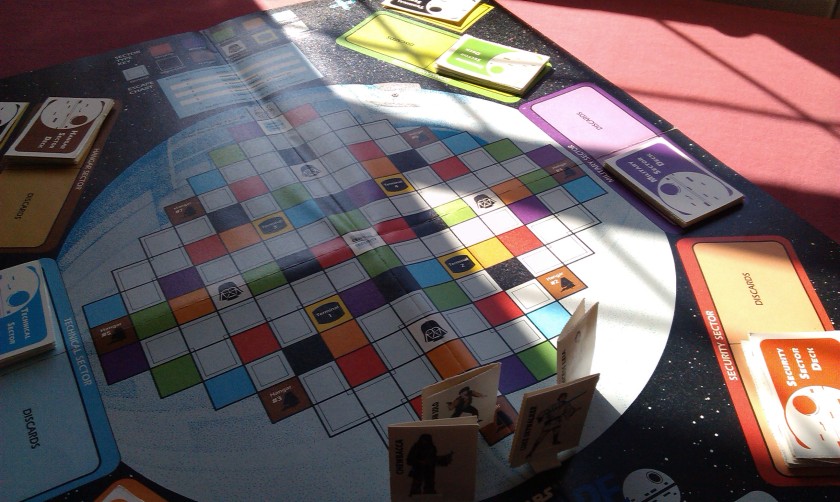 It’s tempting to look at this and think it a straight get from A to B style of game, having encounters along the way. While that is essentially true, there are a number of obstacles in the way beyond just the encounter cards, which can both help and hinder the players. Foremost among these is the need to disable the tractor beam that is holding the ship. There are four “terminal” spots on the board, each having one card in its deck. Only one of these will release the tractor beam; the other three can help you, but you won’t win the game unless you’ve found the beam and disabled it.

The cards spread through the other decks are made up of three types:

Encounters with these cards are the meat of the game, and provide the main roleplaying element, as you make skill checks to gain items or sneak past enemies. Help and Risk cards are generally beneficial, though Risk cards are, well, riskier than Help cards. Hazard cards generally represent stormtroopers pursuing you through the station, which I’ll explain more in a minute.

The arrows on the bottom-right of the cards describe how you can move following your encounter. You must always move in one of the directions on the card, which adds an extra level of theme to the game as you try to plot your movement around a station that you don’t actually know your way around.

The four heroes take turns in the above order, and have character sheets that represent their stats. Typical RPG-style stats, these, that are very similar to the d6 RPG system that West End Games published during this time. During the game, a lot of the encounters you have will require a RPG-style skill test: 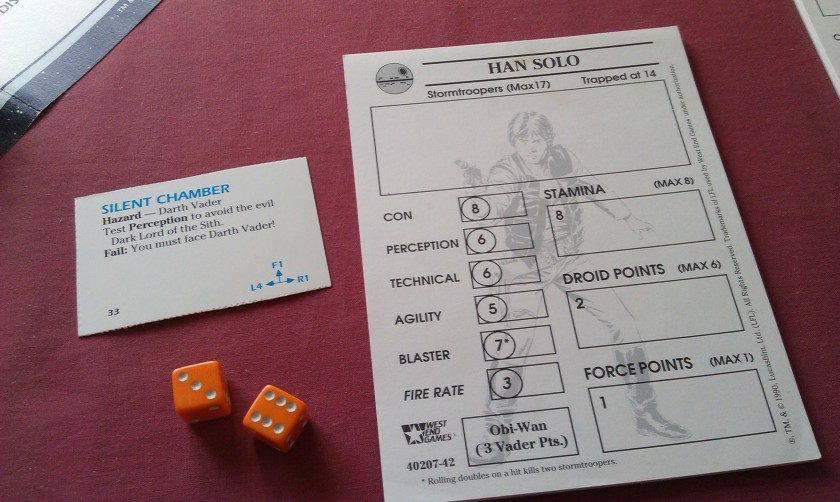 So in the Silent Chamber encounter above, Han needs to make a Perception check, so he rolls two dice and compares it to his stat: you need to roll equal-to or less-than the attribute value in order to succeed. Han’s Perception value is 6, and he’s rolled a 9, so he has failed the check, and must follow the directions on the card. In this case, he must face Vader! Characters also have a number of Force Points, which vary depending on who you play (Luke, as the Jedi-in-training, has 8, while Han only has 1). Force Points can be spent to decrease your dice result, potentially bringing it down enough that you can pass. However, every time you spend a Force Point, Vader is aware of it, and his track also moves (more in a bit)! 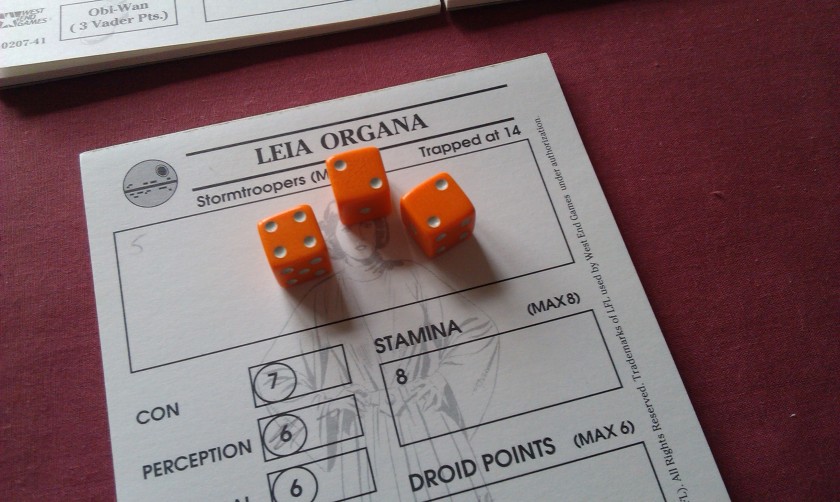 Stormtroopers are pursuing you through the station on every turn, and at the beginning of your turn you need to make a check for how many are behind you. The number of troopers pursuing you is tracked in the top box of your hero sheet – Leia has five troops behind her, for example. So the hero rolls three dice and compares this result to the number in pursuit: as per a normal skill check, if the number is equal-to or lower-than the number of troopers, they score a hit, and you lose one stamina. You can then fire back, which is a Blaster skill check. Each character also has a Fire Rate on the sheet, which describes how many times you can make the Blaster check when returning fire. For every success, you defeat one of the troopers on your back. If you ever have 14 or more after you, then you cannot move on your turn, though you still have your action phase.

But what’s this about facing Vader? 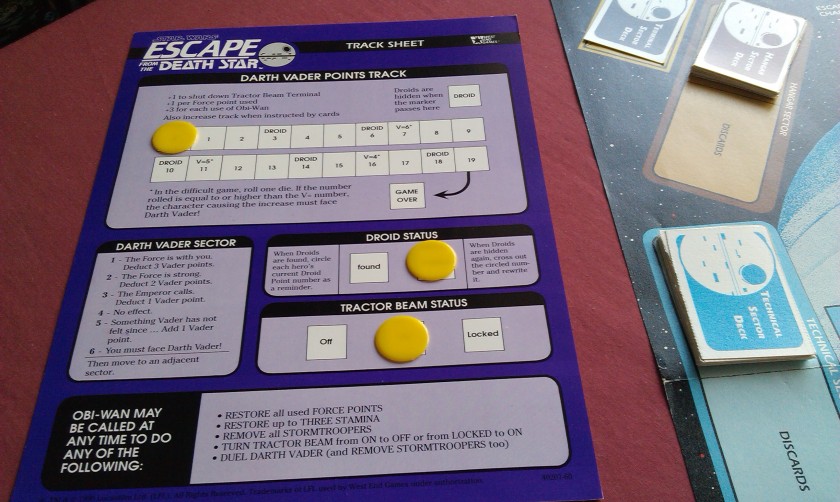 There are three charts also involved in the game, which represent the Vader Points track, and the status of both the tractor beam, and the droids. Heroes can use droid points to help on skills tests, representing the behind-the-scenes help they provided during the movie, but if the droids are ever Found, these points cannot be spent.

The Vader track acts as a sort of timer for the game, as failing certain skill tests will increase the track. In addition, calling on the help of Obi-Wan will move the track up, as the Dark Lord senses the old Jedi’s presence. If the track ever reaches space 19, it’s game over!

Each hero has an Obi-Wan box at the bottom of his sheet, which is struck through when he is used, representing the limited number of times he can be called upon to help. In addition to using him to deactivate the tractor beam (rather than trying to find it yourselves), his primary use is to duel Vader – if you’ve already called upon the Jedi Master and are required to do so again but can’t, you’re captured! Every hero needs to make it to the Falcon to escape, so if even one is defeated, the game is over! 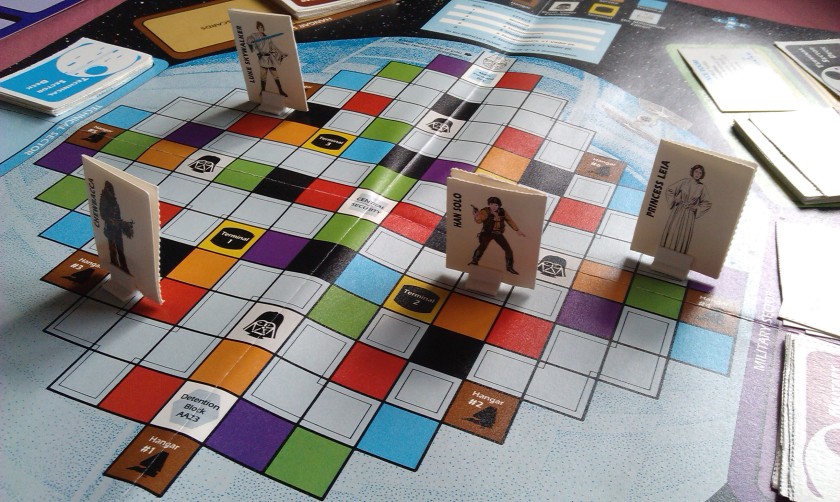 It’s actually a really fun game, and has a fair amount of strategy involved as you try to move through the station and deal with the encounters with your limited resources. The RPG-lite feel to the game is also a significant factor, as you have the opportunity to essentially level-up and increase your attribute values following successful skill tests.

Having read a couple of reviews, it seems this game will only hold a strong appeal to a certain type of player, such as one who loves the theme. Most of this post has been coloured by the fact that I’m an enormous Star Wars fan, of course, but even if I were only acquainted with the movies and little else, I imagine I could still get a lot out of this game as it moves along: I don’t feel you need to be a total SW junkie to enjoy how this game plays out.

There is a real sense of movement as you progress across the board, which I feel works well considering the linear progression you appear to have. There is a great deal of strategy involved as you choose how and when to spend Force Points, when to call upon Obi-Wan, etc. Even choosing your movement can be somewhat strategic – should you always move forward, or should you avoid certain areas? The decks are loosely ranked from technical to service, military, general, security and command, getting nastier as they go: the odds of running into Vader or Tarkin in the command sector are significant. Military decks will have some useful hardware in the armouries, but you may find more stormtroopers than you’d like. Sometimes, therefore, it might be better to move back than forward. Especially if you find yourself on a Vader space, where you have to roll a d6 and consult a chart: 1-3 will allow you to push back the Vader track, but rolling a 6 will require you to face off against him. If you’ve already called upon Obi-Wan, is it worth the risk when the track is at 17 or 18? 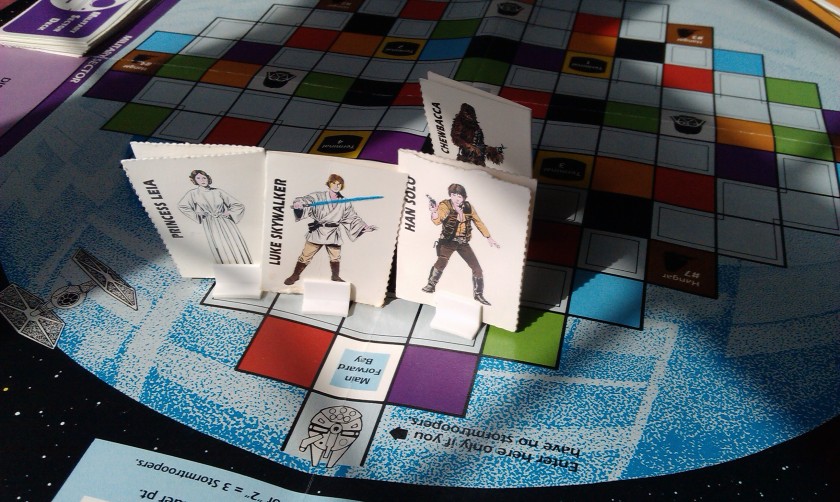 I mentioned earlier the fact that West End Games also published the Star Wars RPG when this was released. Well, they also published three other boardgames during their tenure at the helm of Star Wars gaming, Escape from the Death Star being the fourth and final such adventure. West End Games’ material is so intimately bound-up with my love of this franchise that I have no doubt I’ll be taking a look at these others on future game days.

Until next time, may the Force be with you!