Hey everybody!
So here I am, at the end of the week – this has gone far too quickly! The last two day have been pretty much a whirlwind too, and not in a good way. But still, it’s always good to have the time to just do nothing, or very little at least!

Obviously, more games with Lord of the Rings LCG have been had – at this stage, it would’ve been rude not to, I’m sure you’ll agree! Yesterday I started on my campaign, of course, then today, this happened: 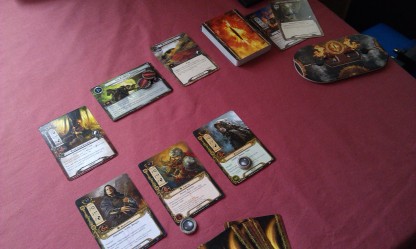 I had just the two games with the game today, To Catch an Orc and The Dunland Trap. It’s about time I played more of the newer ones, after all! To Catch an Orc is the second scenario in The Voice of Isengard, which I’d not played before, and I was soundly thrashed! Lots of locations locked me out of the game, so I couldn’t even try to catch him! Bah. The Dunland Trap is one I’ve played before, but lost as I had a hero die on me in stage 3B. Tragic times. This time it came down to the wire as Aragorn was one wound off dying too. Tough times!

I’m hoping to get to some more of the Ringmaker cycle soon, anyway!

This morning, I popped into the local games store and picked up the new Armada, then this happened:

Video-making is something that I recently looked into, and is pretty fun, I must say! It’s nothing too fancy, don’t get me wrong, but it amuses me and passes the time!

Anyhow. Armada didn’t initially impress me, but then I kinda changed my mind following the GenCon demo, though seeing the actual game now, I’m a bit underwhelmed. The ships look nice, and the cards and tokens are the usual quality stuff, but I really dislike those dials, that movement template, the ship bases… it all just looks so – well, ugly. Clunky. Boring and grey. I dunno, it just doesn’t look as sleek as X-Wing. The game looks like it should play really well, with a lot of tactical stuff, but I’m currently thinking it might look horrible on the table. We’ll see how this all goes…

Last week was GAMA Trade Show in Las Vegas, with quite a lot of good stuff coming out from some of my favourite publishers. The one I was most interested in was Flying Frog Productions, as they have previously announced their year’s products there. This year, they had some really fun stuff for Shadows of Brimstone coming out, but also a new expansion for Dark Gothic. If you missed it, here’s the Dice Tower’s interview with the Hill brothers:

Colonial Horror has an almost Arkham Horror sound to it, and the box looks quite a good size, so I’m hoping we’ll see some really awesome content come through! New heroes, new villains? Hopefully!

I’ve also been painting again! Well, a little. I’ve had these Ogres going on for ages now, and have kinda done some layers onto them and whatnot. The Ogre Bellower (I think that’s what he’s called? The one roughly in the bottom-centre there) I’ve given a darker purple in the face, to try and give the illusion that he’s actually bellowing, and such. Not entirely sure how this will all turn out, but I suppose we’ll see!

I popped into the local GW today to put my entry in for the Paint it Red competition, and while I was there was given a sneak preview at tomorrow’s White Dwarf, and the Adeptus Mechanicus goodness. The models do look really great, and I have been pretty tempted to get them and whatnot, though I was more impressed by both the Leadbelcher spray, and a new technical paint called Martian Ironearth, which is basically Agrellan Earth but with a rusty orange-like hue. The spray will be really useful once I get back to painting Necrons, so I’m thinking I’ll get some of that, and I’m always in the market for new types of paint, so definitely, yeah!

There are two new kits up for pre-order now, though I’m resisting. Having sold off a lot of stuff lately because I had too much, I’m not about to start adding back to the pile of shame! But if you’re interested, check them out here and here!