Yes, it’s Tuesday, so it can only be one thing! Time for the spotlight of awesome to shine on another game, and today we’re looking at another deck-building game. Today, we’re looking at DC: Forever Evil!

Okay, so I’ve been super-busy recently, and unfortunately haven’t had the time to play that many games, so this is going to be a fairly short blog again. Apologies for that. It also feels a bit like cheating, because this is very similar to the DC base game that I took a look at before Christmas, to the extent that I’m almost questioning why I’m doing this at all… But still!

DC: Forever Evil allows you to play as some of the most iconic villains of the DC universe, such as Lex Luthor, Sinistro, or Harley Quinn, and take on the Super Heroes in what essentially amounts to a mirror image of the base game. The Super Heroes form a separate deck, with The Flash taking point, and each turn you attempt to gain cards into your hand to enable you to go up against the Super Heroes. Each one after the Flash has a First Appearance-Attack that must be resolved when they’re flipped over, and when the stack runs out, the game is over and the points are tallied. 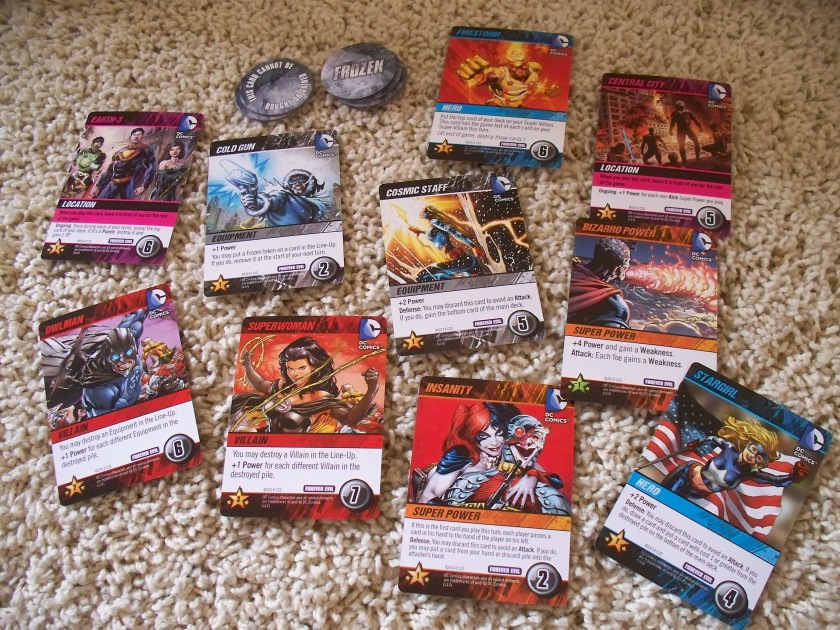 It’s very similar, as I said, to the base game. There are the same mix of card types in the main deck for this game, and overall, you can blend this with the base game with next to no problems whatsoever – in fact, you could do so with no problems at all, actually…

Some people might be thinking that this is a bit of a cheap shot, that it isn’t the clever re-imagining of the base game that Legendary: Villains was to Marvel Legendary, and to an extent, you’re right. However, Forever Evil does have a couple of things in its favour.

First of all, the new main deck cards revolve around a few sub-themes, predominantly card destruction, which the base game really needs (in my view). Deck-building games all follow the same basic course, where you have a starting hand of weak cards, but you go through the game buying more useful cards with allow you to do better things, but you’ll always have those starting chump cards unless you manage to somehow destroy them. Base-game DC has a couple of things you can do, but you’re usually stuck with them until the end. Forever Evil has cards that give some pretty good bonuses for destroying cards, and allow you do destroy cards all over the place. Furthermore, it creates a specific destroyed pile, and there are more cards in the main deck that improve depending on what types of cards are in that pile. It’s something that the base game definitely needs, so it’s well worth integrating these two games for that, if nothing else.

Secondly, you can now earn Victory Points in-game, and there are a number of cards that work off how many Victory Points – as defined by VP tokens – you have. I’m not a huge fan of tokens in card games like these, but it’s not like these are a real problem or anything. At the end of the game, these tokens get added to the VP total of your cards, and it’s a nice little addition to the game.

There are a couple of other things, such as Captain Cold’s Cold Gun, which allows you to freeze a card in the lineup until your next turn, in case a really good one comes up but you can’t afford it right then. However, there’s no Captain Cold in this box! Very disappointing.

Overall, it’s another fun game added to the line, and definitely worth getting if you enjoyed any of the other DC games from Cryptozoic. I’m not a huge fan of pure deckbuilding games, but the theme definitely wins out on this one, at least. However, something that I feel the game misses out on is tying into the actual Forever Evil storyline in the comics, where the super villains form the Injustice League to combat the Crime Syndicate. There’s no attempt to show the villains teaming up, it’s just the DC base game but in reverse. Not necessarily a bad thing, but there we go. The game line in general doesn’t seem to want to particularly build up its theme, as I’ve mentioned before, so I suppose at this late stage of the game I can hardly hold that against it!

Can you believe this game has been going over two years now? Sheesh!