Hey everybody!
Welcome to another game day here at spalanz.com! Still in the vein of trying new ways of presenting my game days, and still in a Legendary mood from last week, I’ve got a bit of a session report for you all to enjoy here!

On the back of my Legendary top ten, and that of fellow-blogger manofyesterday, I was fired up to play a game with some heroes that I don’t tend to go for. The result was actually really enjoyable, let me tell you!

Domino, Spider Woman and Black Widow vs Mysterio
Sinister Six, Emissaries of Evil, HYDRA and Phalanx in the villain deck

The object of this scheme is to basically defeat the mastermind before evil can win by four villains escaping with the plutonium (represented by scheme twists). I was playing a solo game, hence using only three heroes, however I always use the full set-up for villains in the interests of having a varied game. This scheme uses an extra Villain group, so I picked HYDRA; any Master Strikes become additional mastermind tactics that need to be defeated in order to win, creating as many as ten attacks against the mastermind! Let’s begin…

Turn One:
I drew a Scheme Twist! With no villain to attach it to, it was KOd, to reveal Egghead. His Ambush revealed a Master Strike, so I was safe for the time being, though without enough fight I could only recruit Domino’s ‘Ready for Anything’ card, which lets you choose if you’d like 2 fight or 2 recruit points. Onwards!

Over the next few turns, my expert shuffling revealed a number of Phalanx henchmen… bah!

Turn Eight revealed Viper, then Turn Nine revealed HYDRA kidnappers:
By now, I had two copies of Domino’s ‘Specialized Ammo’, allowing you to discard a card with either recruit or fight points in order to gain four recruit or fight points, ideal for converting your SHIELD Agents and Troopers! I used two Troopers to gain 8 fight points, allowing me to first defeat the Kidnappers (and gain a Maria Hill card!), then Viper – the kidnappers, now already in my victory pile, allowing me to avoid the Viper fight effect of gaining a wound if I had no HYDRA villains in my victory pile.

To finish up, I bought a copy of Black Widow’s ‘Mission Accomplished’ cards. Couldn’t have put it better, myself!

Turn Twelve revealed the second Master Strike card, so it was time to go up against Mysterio!
I had four cards that allow for card draw, giving me a hand of ten to begin the round. I discarded a Trooper to make Specialized Ammo into 4 fight points, and Ready for Anything added two to make it 6. Spider Woman’s ‘Bioelectric Shock’ made 8 fight points – the mastermind tactic I revealed was Captive Audience, which allowed me to rescue a Bystander for each remaining mastermind tactic. Due to the two Master Strike cards, that meant 5 Bystanders!

I generated 8 more fight points from Black Widow’s ‘Silent Sniper’, another Ready for Anything, then two Lucky Breaks. However, I was up against a Master Strike, so there was no effect.

On Turn Eighteen, I went up against Mysterio for the third time, but only had the other Master Strike in there.

Turn Twenty-One – what a Twist! Shocker got the plutonium, and the second revealed card was a third Master Strike – no! I went up against the mastermind this turn, and again on turn twenty-four. Turn Twenty-Two saw the city full of villains, however I managed to pull it back! 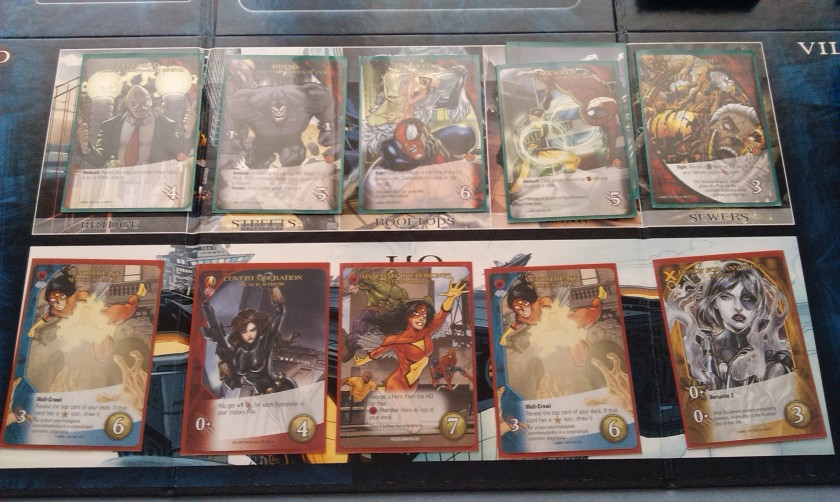 Turn Twenty-Five saw a second Scheme Twist, which went to the Endless Armies of HYDRA. I could only manage 7 fight points, so defeated Chameleon, whose position above Spider Woman’s ‘Arachno Pheromones’ allowed me to recruit a card for free!

Turn Twenty-Six saw the effect that I’d been waiting for take place:
Venom Blast gave me 3 fight points, and Against All Odds made that 8. A Lucky Break increased it to 9, then Black Widow’s ‘Covert Operation’ doubled that number, due to having 9 Bystanders in my victory pile! I went up against Mysterio twice, but only got two more Master Strike cards.

Only one more mastermind tactic left…

Turn Twenty-Eight saw another Scheme Twist added to the Endless Armies, who then also captured a Bystander. Black Widow, with her social conscience, therefore defeated the Endless Armies outright, thanks to her Secret Sniper card. I also generated 8 fight points this turn, so defeated Mysterio’s final tactic, Master of Illusions – being his final tactic, it therefore had no effect!

However, I am always one to clear the decks, so went for one more turn, where I (thankfully) had another Covert Operation, this time giving me 10 fight points. Mysterio was finally defeated!

So, yeah!
As mentioned up the top there, this game was inspired by the top ten lists – specifically, manofyesterday’s, where Domino appears in the #1 slot. She’s a hero I haven’t actually given much thought to before, so was intrigued – to say the least – as to why she would merit such a high place. Well, I have to say, I’m pretty impressed overall! Versatility felt, at first, a bit like cheating. Yes, you can only choose fight or recruit, but still, it felt like options were being opened up too much, if I’m honest. However, once the game got going, it was good to see how something like Specialized Ammo was tempered by having to first discard a card, or Lucky Break, or Against All Odds, which require a X-Force hero to be revealed first. Only Ready for Anything comes across as truly wide-open, but when you’re only generating 2 points of either, I suppose it isn’t exactly all bad.

The most powerful cards in this line-up, for me, are therefore:

Against All Odds just didn’t have the right combinations coming – I think only once I also revealed a Lucky Break to generate both fight and recruit points that turn. It was by far and away Specialized Ammo that proved to be the outstanding card in this roster, anyway. Converting Troops or Agents into four times their worth is just awesome! Black Widow’s Covert Operation really came into its own following the Captive Audience mastermind tactic that gave me 5 Bystanders in one go. And I’ll forever rejoice at Silent Sniper taking out the Endless Armies of HYDRA in one hit! Awesome times!

Marvel Legendary continues to be in my all-time favourite games, and if you haven’t already, you really ought to get your hands on it!

(My original look at the game can be read here, and that of manofyesterday here).

3 thoughts on “It’s all about Versatility!”