Following my look at the Legend of Drizzt boardgame on Tuesday, it’s only fair that I look at the books that inspired it all. As I mentioned in that blog, I came to Drizzt in early 2013, and was a bit hesitant at first, due to my prior commitments to the Star Wars universe. I suppose I felt like I didn’t have the room for something as big as this in my head. A similar argument was made in the early days for Warhammer, but that didn’t last, either. My friend and gaming buddy Tony has been a D&D fan for as long as I can remember, and had frequently tried to get me into the fantasy realm, though I’d always resisted. However, after playing and enjoying the offerings of the Adventure System boardgames, I thought I’d see what the fuss was all about, and bought the box set of the first three books in the Legend of Drizzt line. A line that, I hadn’t realised at the time, stretches to thirteen novels, with an anthology of short stories! 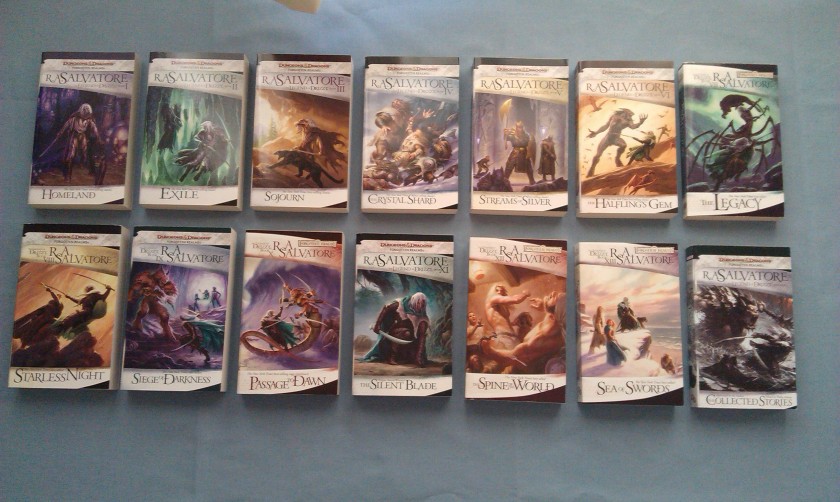 So I embarked on Homeland, snowed up at home, and found myself utterly enraptured. From that first chapter, describing the drow raid against the backdrop of Drizzt Do’Urden’s birth, I was hooked. The intricacies of drow society sucked me in even further, and within a matter of days I’d finished it. Homeland is one of those books that took me along for a truly incredible ride, one that I needed to have a break after, to catch my breath and digest it all. While I find the trope of a misunderstood hero not fitting in with his society really quite hackneyed, the execution here is just fabulous.

I’d only previously encountered RA Salvatore through his Star Wars novels – Vector Prime, and the novel for Attack of the Clones. Both of these had been a bit wordy, and a bit heavy-going, so this only added to my suspicions about the series. However, Homeland threw all that out of the window, and proved to be an immensely enjoyable experience. Seriously, I cannot tell you just how much this book has pleased me – you just need to read it and see for yourself.

Real life intervened at this point, however, and I found myself moving house, so unable to move onto book two, Exile. When I finally made it to this book, I was ensconced in my new place, no snow on the ground, but had a similarly enjoyable experience. It’s set ten years after Homeland, so I suppose the break helped… We get to see even more of the Underdark, the land of eternal night. Dark Elf (drow) society is further expounded upon, and the characters of the previous book further developed. Even though Drizzt is now an outcast of his society, due to his conscience, we still see plenty of Matron Malice and her brood.

Drizzt’s mother is actually among the pantheon of amazing fantasy characters, for me. Literally every scene she was in had me engrossed utterly, so that when I’d put the book down to, say, get another coffee, I’d be surprised by the fact that I was in daylight! Yes, it really was that incredible. However, the whole story is just propelled along so well that it’s really easy to become so embroiled. Without the burden of exposition that Homeland has, Exile is consequently just an awesome adventure!

Book three, Sojourn, unfortunately started to let me down. At the end of Exile, we know Drizzt is now determined to live his life on the surface of the world, and of course this whole trilogy has been a prequel to the Icewind Dale trilogy, where we see Drizzt on the surface like he’s been there for years. Sojourn, therefore, has classic “bridge syndrome” of needing to get a character from A to B. The story is still good, of course, but it does feel a little ploddy at times.

All in all, however, the Dark Elf trilogy is bloody marvellous! You really need to go out there and get a copy of these books! 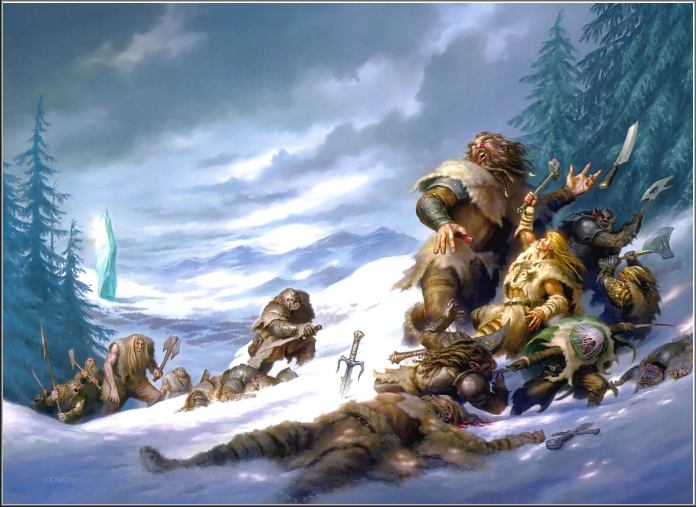 As I said, anyway, Drizzt first appeared in The Crystal Shard, where he was actually a supporting character to the tale of the young barbarian, Wulfgar. The popularity of the Dark Elf, however, led to the Legend being born, and it didn’t take long for the prequels and sequels to come, and the whole to be repackaged as the Legend of Drizzt. However, reading The Crystal Shard now, it feels a little uneven at times, as it’s being sold as a Drizzt novel, though there is a lot of focus placed on Wulfgar. At any rate, The Crystal Shard is a big difference from the previous stories, if you read them in this order as I did!

Inspired by traditional fantasy rather than the RPG, there is a lot of Tolkien in The Crystal Shard. That’s not necessarily a bad thing, though. I’m not actually a fan of Tolkien’s prose, as I find him unnecessarily long-winded, but his inspiration is beyond question, and his influence tremendous. Here, we get a lot of Tolkienesque scenes and sequences that feel like they’re trying too hard to be Tolkienesque. If they had been more Salvatore-esque, perhaps they would have succeeded much better? Well, anyway, this was Salvatore’s first published novel.

All of this aside, it’s pretty epic in its scope, and features a handful of story kernels scattered throughout that would spin off later novels in a completely natural way. Awesome stuff. While the story is notable for just how human the main characters are, it’s particularly noteworthy for the issues of race it addresses. Drizzt is a Dark Elf, a species also called drow, which I have mentioned before of course, but in D&D, Dark Elves are literally dark, with black skin and white hair. That the drow are reviled on the surface of the world for their evil deeds is a really nice metaphor for addressing racism in the modern world. Of course, this was before the Dark Elf trilogy, when we discovered that the drow really are evil and heartless. But I was particularly impressed with how Salvatore worked this into the book, and it goes to show how fantasy writing isn’t all about escapism. Written in the late 1980s, though, this perhaps also helped legitimize D&D, at a time when it was being demonized for encouraging Satanism.

While knowing that the ideas from The Crystal Shard would be picked up in later novels, I was nevertheless surprised to discover the next book in the trilogy, Streams of Silver, went a completely different route. Bruenor Battlehammer takes centre stage as we follow him on his quest to find his ancestral homeland of Mithral Hall. This book introduces the assassin Artemis Entreri, sent to pursue the halfling Regis to regain a valuable gemstone. Essentially a road trip story, it is actually really enjoyable, with a lot of twists along the way as we explore more of the world. By the end, however, all appears lost, as Bruenor appears to have died in his battle with the dragon Shimmergloom, and Regis has been captured by Entreri.

The Halfling’s Gem concludes the trilogy, though I have yet to actually finish this installment! Shameful, I know. A huge chunk of the beginning of this novel takes place as a boat trip, and I have to admit, I felt a bit journey-ed out by this point. I tend not to like road-trip stories where the focus is on that journey, I have to say. They tend to have a rambling quality that I find unfocused, but that’s just me. I abandoned book three roughly in the middle, over the summer of 2013, and I’m not entirely sure what I moved onto in its place! However, I have now embarked upon my attempt to finish it.

There are, after all, so many more Drizzt books out there… 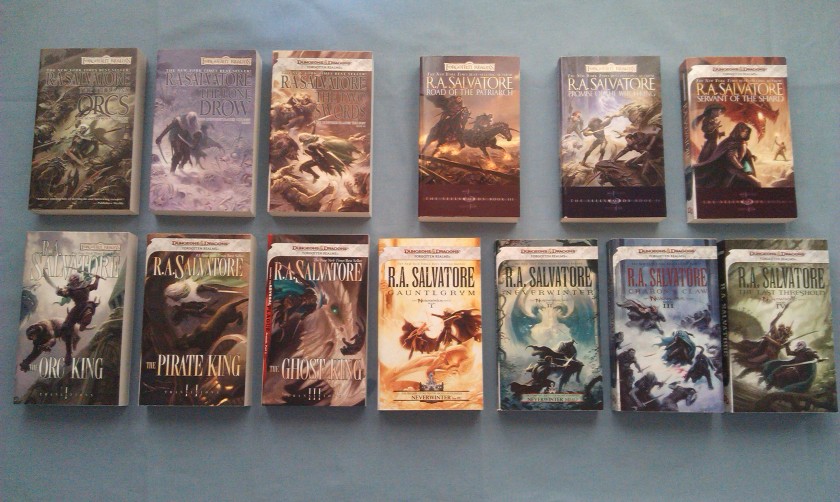