Hey folks!
This weekend, instead of one big-game Saturday, I had a series of plays with Lord of the Rings, going through some of the classic scenarios from the early days of the game. It’s something I like to do at this time of the year, have a trek through some of my favourites from the Mirkwood Cycle, along with one or two from the Core Set. There are so many awesome things about these quests, I just cannot recommend them enough! So I saddled up my Rohan heroes, and away! 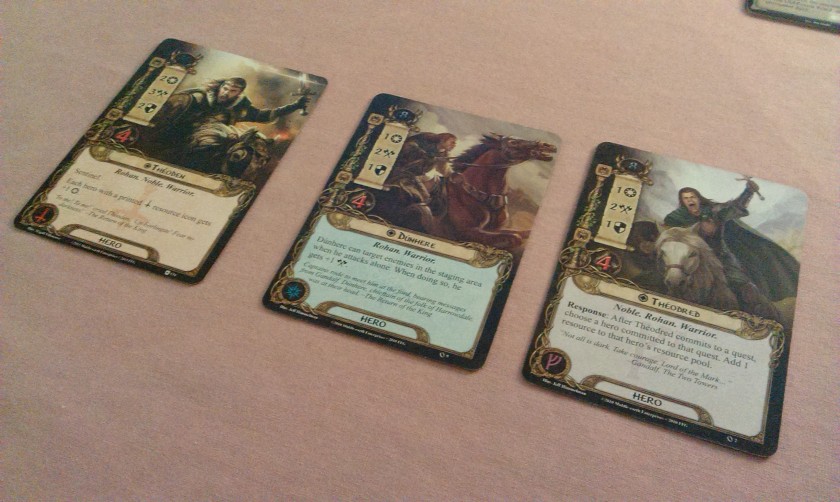 Something that I was particularly pleased with was getting in a game of Journey Along the Anduin, something I hadn’t managed since December 2011, can you believe!! 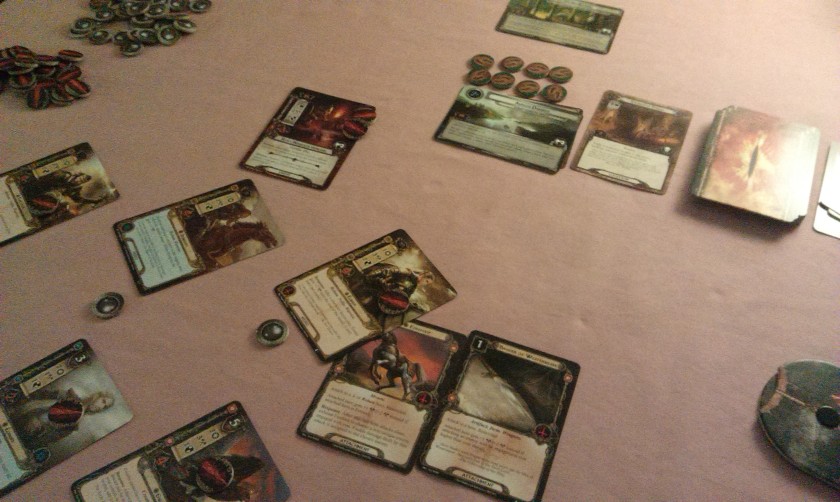 Theodred, poor sod, died on his way through Mirkwood, so he had been replaced by the mighty Eomer – and luckily, I kept drawing Firefoot into my hand early on, so it was all quite marvellous, I have to say! 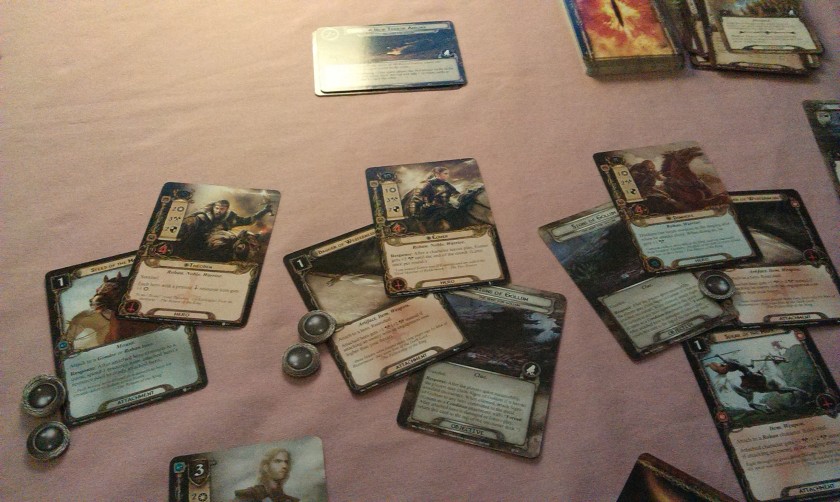 The Hunt begins! I had a very successful hunt, with three Signs turning up quite quickly and none of those pesky hunters, too! Marvellous!! 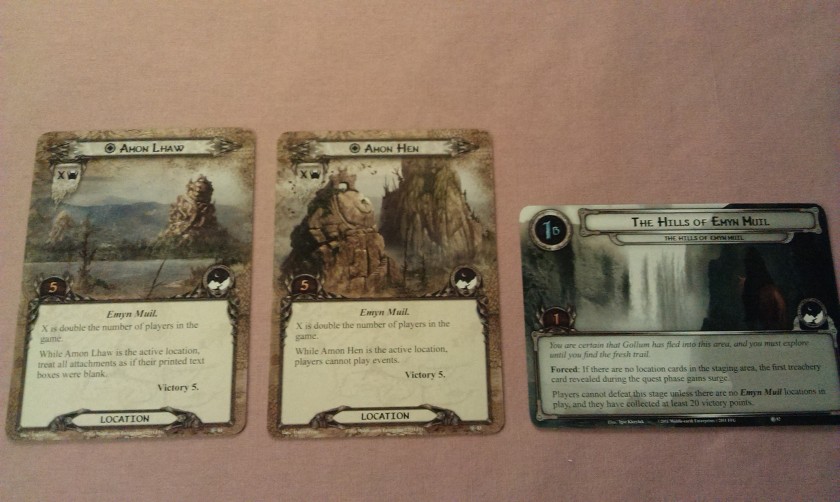 Hills of Emyn Muil is, of course, my favourite, but it didn’t go very well – I turned up three of those Horse Thieves in quick succession, tying up a lot of my fellowship, but I didn’t manage to turn up enough Emyn Muil locations before I threated-out! It still annoys me when people say this is the easiest scenario, as it isn’t! Anyway. Something that occurred to me during this game was how abstract the notion of collecting VPs is here – I think I’d prefer to use the Signs of Gollum cards here, too – we are, after all, trying to pick up his trail again. Might be worth investigating for the future, anyway, adding in those four cards and making the victory condition 20VPs, no Emyn Muil locations, and at least one Signs card in play. Hmmmmm… 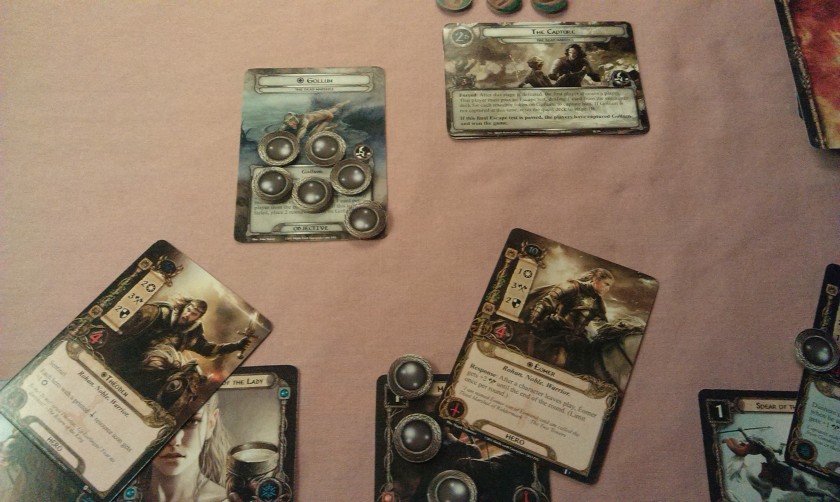 Finally, it was time to go into the Dead Marshes, to try and find the little bugger! As luck would have it, while things didn’t precisely go all that well to start with, I managed to get a really hefty fellowship built up here, so when it came to the final Escape test, I had something like 18 willpower to commit – even drawing six cards for the test, I managed to beat it, and took hold of Gollum in triumph!

A fabulous trek through Mirkwood, and recommended to all and sundry! 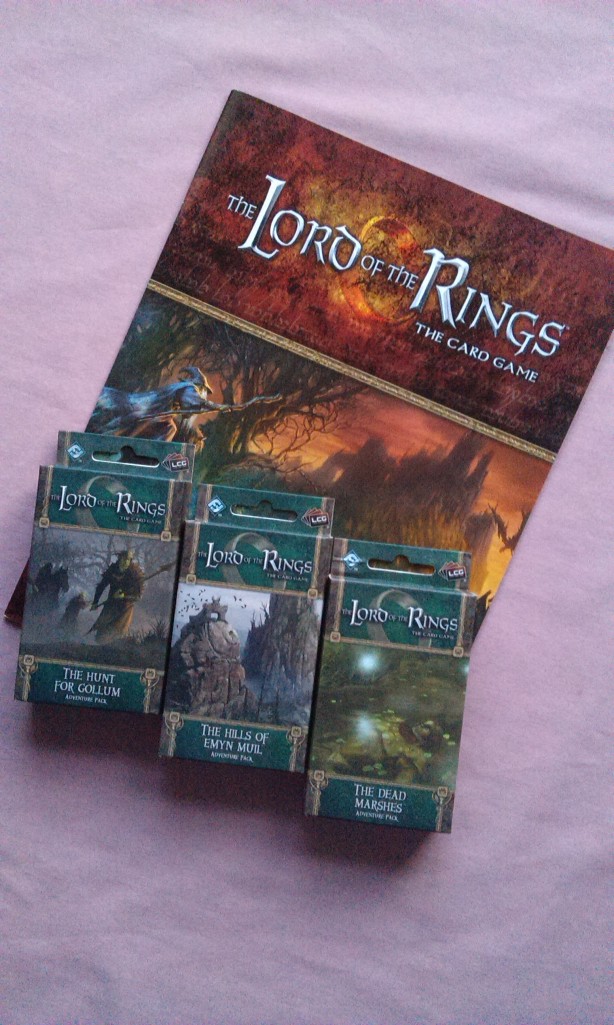