Morning everybody!
Today I’m going to make good on something I’ve been talking about, it seems, since my blog began. I’ve been looking at a lot of my favourite games over the course of this blog, a fair few of which are deck-building games. Almost par for the course, one game has been mentioned in those blogs that I have yet to get to – but no more! For today, I’m going to throw the spotlight of awesome onto Dominion.

This is the original deck-building game – the game that has spawned so many since:
– Street Fighter
– Marvel Legendary
– Thunderstone
– DC Deck Building Game
– Ascension
– Dark Gothic
– Arcana
– Rune Age

The list goes on and on. All of these would not have been possible without Dominion, which first saw the light of day in 2008. The game is gloriously simple – you are trying to score Victory Points, which you get through buying cards. In order to buy these cards, you’ll have to buy other cards. From your starting hand, you have to build your deck to gain the cards you need from an available pool. When either three stacks of cards in this pool have been run down, or when the highest-scoring Victory Point card stack has run down, the game is over and the player with the most VPs wins. It’s very straightforward, but it can also be very strategic, and a whole lot of fun! 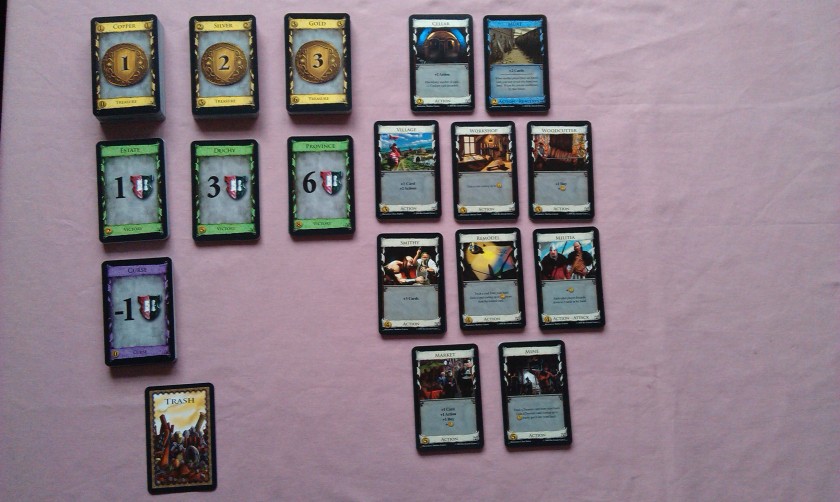 You start the game with a basic hand of seven Copper cards and three Estate cards, so the lowest score you will ever have is 3 VPs. The strategy comes from the Kingdom cards, which are the ones that allow you to do stuff to manipulate the basic flow of the game. On your turn, you can buy one card, you can play one action card, then you have to discard any unplayed cards and draw a new hand. Action cards can allow you to do other stuff, however: 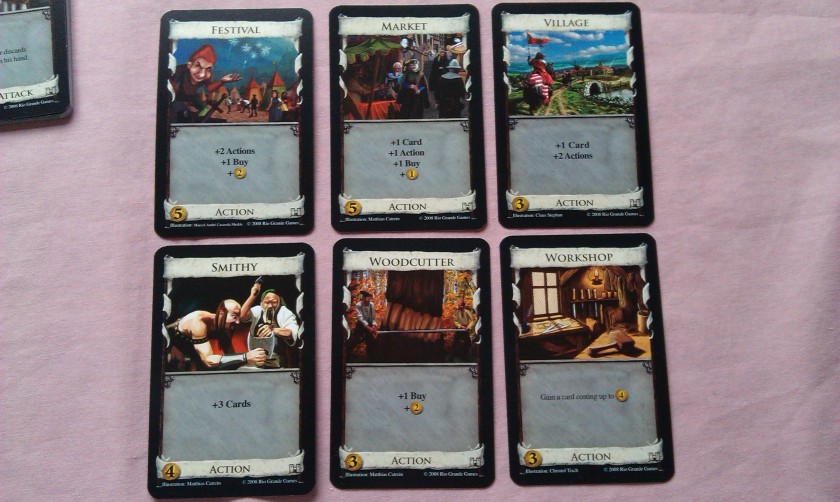 Depending what gold cards you drew in your initial hand (with this sequence, you could potentially have four additional cards in your hand with this action chain resolved), you have a lot of options now!

The other “strategy” that seems to be popular is the Big Money idea of buying up Gold cards as soon as you can, and trashing your Coppers. The idea being that you can then have a better chance of buying Province after Province and getting a high score that way. I put the quotes there, however, because this seems like an extremely boring way of playing – aside from missing out on the depth that comes from the various action cards, it just seems really meh. The other thing to remember, of course, is that the VP cards don’t do anything for you in-game, so if you go on a buying spree like this, you run the risk of clogging up your hand with cards that you can’t do anything with.

Dominion also includes player interaction, with certain action cards being attack cards. One of these, the Witch, gives your opponents Curse cards that are worth negative VPs at the end – having a Moat can help to ward off these attacks, however. 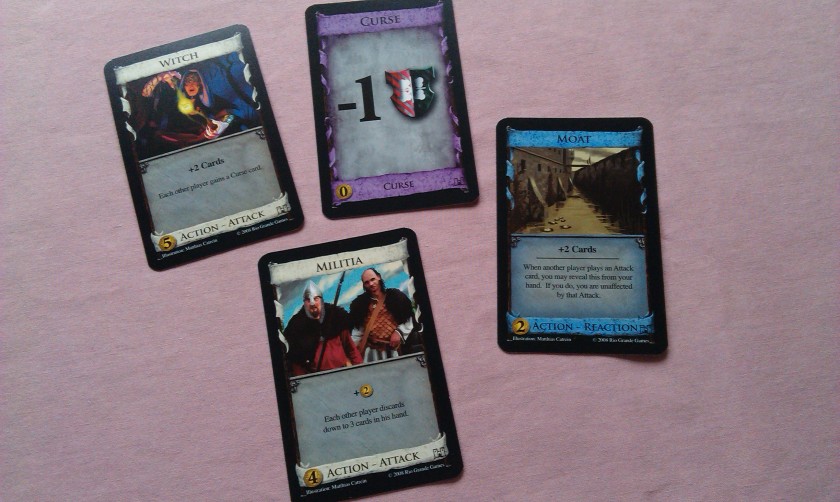 Player interaction isn’t really what Dominion is about in the core set, however, as you’re trying to build your own domain rather than hindering others from building theirs. Later expansions do build on this, however, with more attack cards coming. And luckily, there is a whole slew of expansions for this game! 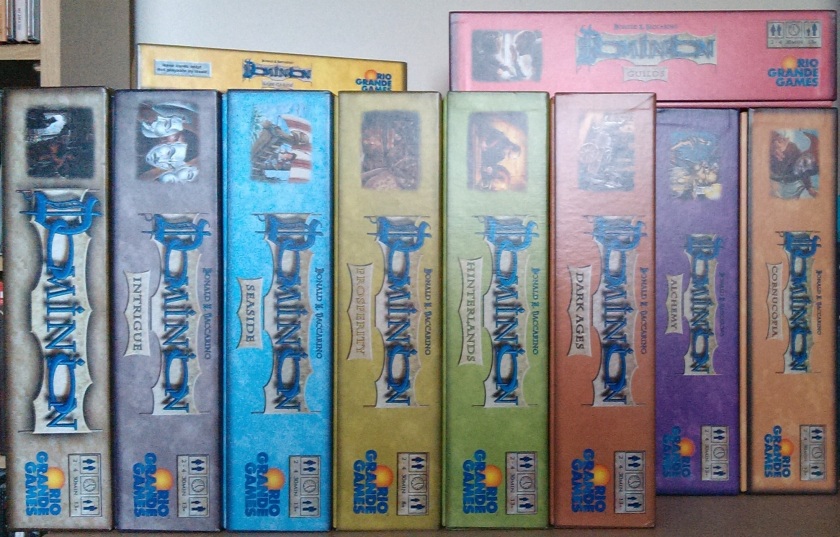 I’ll be taking a look at these in another blog. I was originally intending to include them all here, but each expansion introduces new mechanics that, taken together, would create something of a monster blog. However, I will mention the next box in the set, Dominion: Intrigue.

This is basically a second core set for the game. While the expansions focus on adding new Kingdom cards, Intrigue does this but includes all of the money and VP cards you need to provide a self-contained game. As with pretty much all of the Dominion line, the experience is very much a ‘more of the same’, however there are some differences. Intrigue introduces hybrid cards that provide VPs as well as in-game effects, as well as focusing on cards that present the player with a choice in how they are used.

The last box I’ll look at here is the replacement basic cards.

This box includes new art for the base cards used in the game, some of which is really very nice, I have to say! The base cards included here take in those from the entire line, so we also have stuff from Prosperity and Alchemy.

When I first came across this, I was a bit confused as I thought it could potentially undermine the need for the base game – getting this box and one of the expansions would allow you to play the complete game. However, it’s not really cost-effective to do that, as the core box is cheaper than two combined boxes. But anyway.

Dominion is a subtle and elegant little game, with a lot to enjoy about it. While I tend to vacillate in my enjoyment of it, as I sometimes find the collection of victory points a little less than stimulating, I nevertheless appreciate it for what it is. If you’ve never played a deck-building game before, you should definitely try it. Even if you’ve played one of the other games mentioned at the beginning of this blog, you should still take a look at the grandfather of them all!

Buy it from amazon:
Dominion
Dominion: Intrigue
Dominion: Base Cards

3 thoughts on “The grandfather”