Hey folks!
It’s Halloween week, and while I don’t usually go in for all of that, I thought I’d mark it by devoting all my blogs this week to the horror theme. So you can expect a lot of Lovecraft in the coming days!

I’d like to start, however, with a look at one of the expansions to Fantasy Flight’s Arkham Horror – Dunwich Horror! 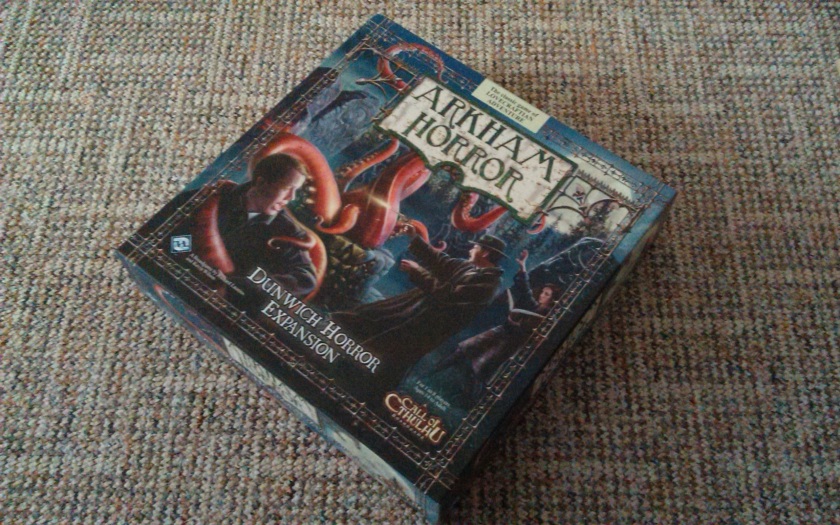 Now, let’s get this right out in the open from the start: this expansion is the best ever. Remember when I looked at Something Wicked for A Touch of Evil (another excellent horror-themed boardgame you should definitely check out!)? That expansion is really first-rate, and one of my favourites to be sure. However, Dunwich Horror is just perfect, and, I cannot stress enough, the best expansion to a board game ever. Why is this? Well, I’ll tell you.

(I’m not going to go over the basic rules of Arkham Horror, as I spent a while on those in my blog on the base game, which you can read here).

The system in Arkham Horror is quite straightforward – seal up six gates, or defeat the Ancient One, and you win. In order to describe the adventure, a whole slew of cards are involved; standard-sized cards for encounters in Arkham or the Other Worlds, and mini cards for the items and spells that you can acquire on your way around. The game’s AI is also shown through the cards of the mythos deck. As such, Dunwich Horror brings more of the same, with 332 new cards (there are nearly 370 in the base set). 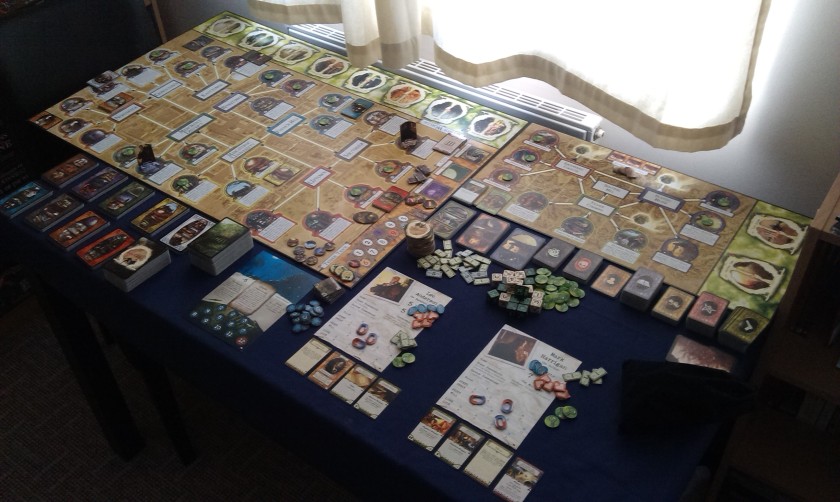 Perhaps the most obvious thing about the expansion is the new board, however. 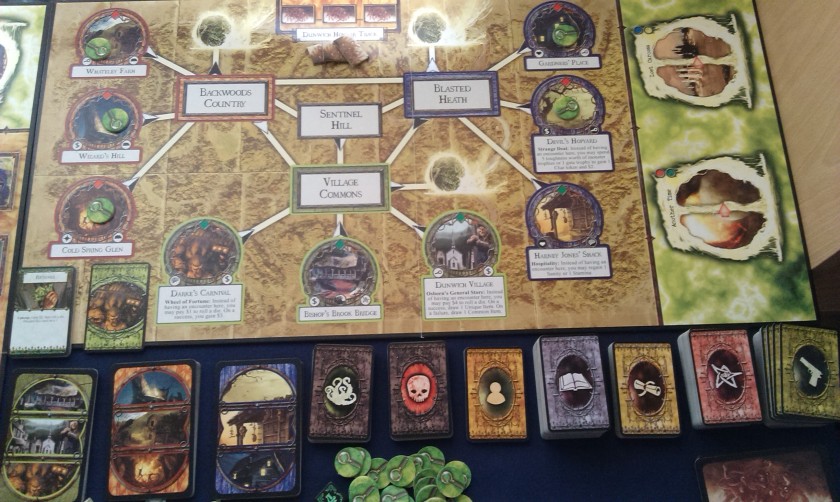 Depicting the sleepy hamlet of Dunwich, it comes with its own set of neighbourhood encounter cards, and two new Otherworlds. The new locations centre around the HP Lovecraft tale The Dunwich Horror, so we can visit the Whateley Farm, the Devil’s Hopyard, and even Sentinel Hill itself is featured!

Players travel to Dunwich through the Train Station, where they can pay $1 (and one movement point) rather than having an encounter there to move from the station to Bishop’s Brook Bridge, from where they can then explore the board as normal. The new locations are very much of a muchness, with 5 unstable locations and 4 stable. It obviously pays to have one investigator in Dunwich at the very least, to help combat gate openings there (as, indeed, would be your strategy when using any of the board expansions).

The Dunwich board has two other, linked features, however: the Vortices, and the Dunwich Horror track.

Bigger’n a barn!
The Dunwich Horror himself does indeed appear in this game, which is just wonderful! The way he interacts with the game, however, is quite interesting. You’ll notice on the new board that each of the three streets has an arrow pointing into a vortex space – when a monster is pushed into a vortex, it is removed from the board and placed back in the cup, and a Dunwich Horror token is added to the track. When there are three tokens on the track, the hell-spawn of Yog Sothoth appears on Sentinel Hill, ready to wreak havoc! 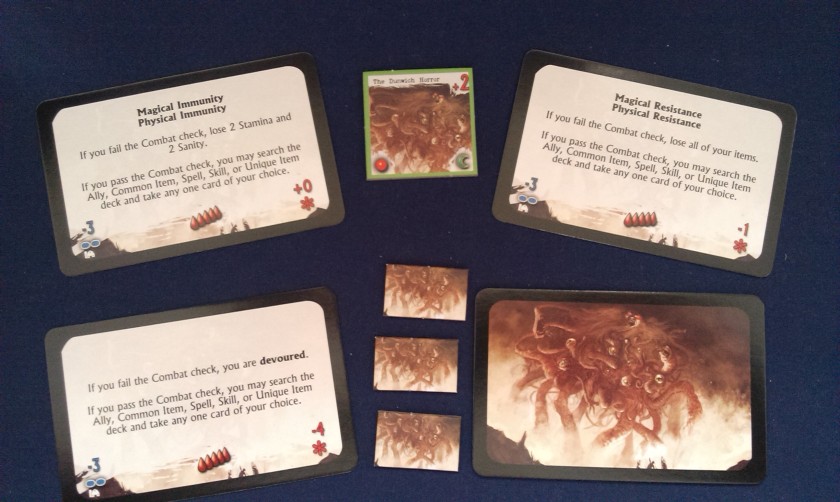 While it has a monster token like any other, there is also an associated deck of Dunwich Horror cards that are used whenever the investigators enter into combat with it, meaning that combat is never quite the same (though its toughness is always 5). Even if you defeat the Horror, you get to draw an item/ally card rather than keeping the token as a trophy, so he can always come back for another rampage…

More new monsters!
While we’re on the subject, Dunwich Horror adds a new type of monster, Stalkers. These are indicated by a purple border, and when they’re adjacent to an investigator, they will move directly to that investigator – even if it means ignoring the normal movement arrows! The only time a Stalker won’t follow an investigator is when he moves to a stable location, where he can pause for breath before once again braving the horror!

Two of the new Ancient Ones in this expansion have “special” monsters, which don’t enter the cup but come into play through other effects: Child of Ahoth and Servant of Glaaki. The red circles on these monsters denotes another new type of monster, Spawn Monsters. While primarily denoting their special status, the red circle also denotes that these monsters do not count towards the monster limit, and also they cannot be claimed as trophies.

These new Ancient Ones are drawn from across the mythos, and include Shudde M’ell, who should be familiar from the core set’s spell card Red Sign of Shudde M’ell, the father of the burrowing Cthonians from the Brian Lumley story Cement Surroundings. Shudde M’ell can cause locations to disappear from the map, which is slightly unnerving! His World Cracking ability can potential lose the players the game, occurring whenever a monster surge hits. Yet another reason to keep those gates closed! Perhaps even more worrying, if he should happen to wake up, his attack is to discard one of the undrawn rubble tokens that signify a location has disappeared, and if there are no tokens left to discard, Arkham is destroyed and the players lose! With both Physical Resistance and Magical Resistance, and at most seven rounds of combat, this is not an Ancient One you want to mess with!

Tsathoggua is, I believe, the worst of the new guys, however. His effect is to prevent the special abilities of all but five locations in Arkham, and when he attacks, you must have monster and gate trophies to discard otherwise you’re devoured! Okay, so with the University and Boarding House having no special abilities, you don’t have a lot of options for what to do with your trophies, but even so, it’s pretty scary stuff!

I really like these new Ancient Ones, at any rate. In the base game, while they’re not exactly bland, they are fairly much of a muchness. These new ones, however, you need to really prepare for if your plan is to stock up for the Final Battle rather than seal six gates. If you happen to have one wake up on you when you don’t plan for that, it can be pretty awful!

New cards!
While there are a lot of cards that are simply added into the existing Arkham decks, including a whole new set of neighbourhood encounters, there are also plenty of new cards to enjoy in this expansion as well!

You can now become a member of the Sheldon Gang, which can allow you to draw items when you’re in the streets, but you also run the risk of getting yourself arrested. There are also four new cards called Conditions that interact with specific locations (three in Arkham and one in Dunwich). The cards are only used during encounters at that location, and are ‘turned on’ by having an initial encounter there that usually requires a fairly elaborate process. However, they are very handy, particularly the Coded Messages card, which allows investigators to trade clue tokens (otherwise not allowed in the game). 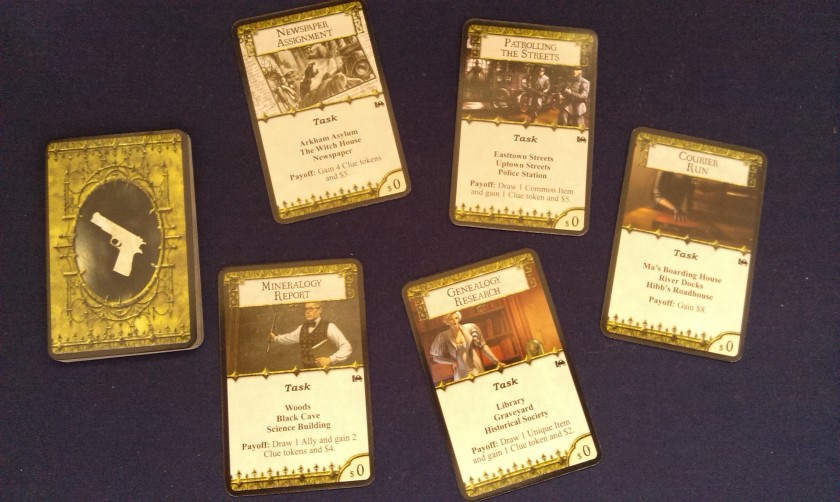 The real meat of this expansion, for me, begins with the new types of Common and Unique items. In the Common Items deck are a series of Tasks, while the Unique Items have Missions for you to complete. The principle behind both is that you have encounters in the locations listed in order on the cards, after which you receive the payoff/effect.

Some of these are extremely powerful, such as the Sealing the Beast’s Power Mission, which allows you to lower the Ancient One’s Combat Modifier by 3, not to mention For the Greater Good, which requires an investigator to sacrifice himself in order for the others to automatically win the game. Of course, they’re no picnic to complete, as some of them send you off all over the board (or, in the case of the aforementioned For the Greater Good, four OtherWorlds). This sort of side quest mechanic is a whole lot of fun, and for me makes the game just that much more immersive.

Next up: Gate Bursts! Your average Mythos card will have the location of where the next gate opens but, if that location has been sealed by an Elder Sign, the gate bounces off, and all is well. No more! Dunwich Horror introduces Mythos cards with the gate’s location outlined in orange, meaning that a Gate Burst occurs there. While no doom token is placed by the Gate Burst, the Elder Sign is removed from the board, however, and the gate and monster placed as normal. An evil game just got much more scary!

Finally, we have my personal favourites of all the new cards: Injury and Madness cards.

Remember in the base game,  when a combat encounter would reduce you to 0 stamina or sanity, so you’d immediately be whisked off to the Hospital or the Asylum for some medical care, and if you had enough money you could emerge fairly quickly as good as new? Well, no more! Yes, you can fully heal, but the encounters in Arkham (and the Otherworlds) are like no others you experience, so you can’t expect to escape from them just like that. Now, there are lasting effects you have to endure…

These cards are just inspired, I feel, and really should have been in the base game (at least Eldritch Horror learnt from this game!). When you find yourself in the Hospital, you gain an Injury card; when in the Asylum, a Madness card. These form a permanent debility that you cannot get rid of, and serve to make investigators much more cautious in their encounters. Furthermore, each deck is made up of two copies of twelve different cards, and should you find yourself with the same condition a second time, you’re immediately devoured! Combat just became a whole lot more dangerous!

This is truly one of the greats, and makes Arkham Horror a true juggernaut of the gaming world. In many ways, it behaves precisely as any game expansion should, by bringing some more of the same, some deeper immersion, some new mechanics, some new components, and some increased options. The new board, the new monsters, and the new Ancient Ones and Investigators would be enough for a lot of game expansions to go to retail, but Dunwich Horror brings us yet more, with the new options within the bucketload of new cards on offer. Yes, injury and madness cards should arguably be in the base game, but I do feel that they have the potential to decrease the core game’s wider appeal. Not to get snotty about this, but Arkham Horror is a busy game, and people I have introduced it to tend to be a bit overwhelmed at first. Adding in another mechanic could potentially put people off, so in that respect, I think it was right to leave those cards for an expansion.

I am a longtime fan of the HP Lovecraft story, so I am probably biased anyway, but I really love seeing the people and places from that tale here in the boardgame. The good thing about Arkham Horror, of course, is its modular nature, so you can add in bits that you want, and leave out others – indeed, you can leave out the new board and just use the new cards, investigators, ancient ones and monsters to increase your options in the base game. As hinted already, madness and injury cards should be top of your list if you decide to do this!

But there’s nothing quite like the full experience of one of these big box expansions for Arkham Horror!

Buy it from amazon:
Dunwich Horror

7 thoughts on “Come on down to Dunwich!”