Today’s the day the clocks go back here in the UK, so obviously I woke up at 2am. Bah!

It’s been a fairly lacklustre week, so far as gaming goes. I got to play a couple of games earlier in the week, which will feature here at some point in the coming weeks, no doubt – top of the list, of course, being Elder Sign, which is a great little game from Fantasy Flight that I’ve mentioned a couple of times lately, especially when the new expansion was announced not too long ago.

I’m finding myself seemingly unable to get the time for large-scale gaming lately though, and this saddens me quite a lot. Sticking with Cthulhu games, I’ve been feeling in the mood to play Eldritch Horror again lately, as I’ve not managed a game since May, when the expansion came out. So much for my summer of Yig, hey… Real life has got a lot to answer for! However, I suppose it doesn’t help that my usual gaming table for such big games has been taken over lately, by either the degree work or my painting adventures.

I haven’t really regaled you all with such things for a while, have I? Well, my painting miniatures has continued apace, with all of my updates being confined to tumblr. There is a link over on the right to my Necrons page, where I link to all of my tumblr posts as I make them, so you can always investigate further if you’re so inclined, anyway! This weekend, however, I’ve moved on to the first “big” model for my Necron army, the Tomb Stalker!

This is something that I got from Forge World earlier in the month, one of their resin kits. I’ve been painting the beast in segments, as it seems almost unnecessarily complicated, though I suppose all of the bits allow for greater customization and such. My original plan was to have the model swooping down onto a Space Marine, but during last night’s modelling this proved to be unfeasible (there are a lot of bits that go under the head, for instance, so the stalker needs to be raised up in the front anyway), so I’m now onto plan B.

I think it still looks pretty cool, however! There are twenty legs, each of which has a separate claw that needs to be attached, and an additional twenty “tertiary velocitators”, which are just small legs that I don’t think will be impacting much on the model’s final pose due to the fact they’re so small. Anyway. I originally had some terrain on the base, from which the stalker was swooping, but have since removed this as it was interfering with the pose. While my current plan doesn’t really call for any more terrain, just the Space Marine casualty, I think I may still do something when the time comes, as it could help to attach the model to the base.

The whole thing should look pretty damn good when it’s done, anyway! The green carapace will be finished with a bit of a metallic look, along with the silver main body and gold details (such as the head) are intended to fit in well with the Lychguard colour scheme I have going on.

The entire Necron army I have currently is also looking really good, I think! The recent additions include a squad of Deathmarks and some special characters. I’m quite pleased with my results, anyway – which you can see here!

In game news, anyway, there hasn’t been a great deal to write home about. We’ve had another preview of Imperial Assault, which talks about the missions and such, and looks like it’s shaping up into a great game. Like the campaigns in Descent, missions form an overarching series of games, but Imperial Assault also includes side missions, which are single-game affairs. Nice to see that the game will be supporting multiple styles of play, at any rate!

Armada has had another preview, also, though I must admit to being still less-than-enthused by this game. When it was announced back in August, I was slightly underwhelmed because I wanted a ground-based miniatures game, not another space battles game. Now that we have Imperial Assault on the horizon, of course, I had half-expected my opinion to change, but it really hasn’t. As it stands, I’m still feeling a bit meh about the game, so at this stage I won’t be dropping the £60 that amazon are currently asking for it (although I did do a double-take when looking at that, as I was expecting it to be more expensive!).

I think part of the reason for my reluctance to even entertain the thought of this game is down to having nobody to play it with. I got burned a little with X-Wing, which I have stopped buying for now, as I have managed to play it three times since its release nearly two years ago, all three of which games took place nearly two years ago. I dread to think how much I’ve actually spent on the game, and am seriously considering letting go on ebay, but I’ve sold games previously, only to berate myself for doing so, and then re-buying them anyway (Blood Bowl and Space Hulk: Death Angel are but two examples).

So, I think I’m going to avoid Armada for the time being, and likely won’t be rushing to buy it at release.

Something that has excited me this week, however, is the release of The Nin-In-Eilph, the latest addition to The Lord of the Rings. With all the hoopla surrounding The Road Darkens, it was almost possible to forget we were actually in the middle of an adventure pack cycle! So we have some interesting new cards coming our way, along with a quest that seems to be akin to The Dead Marshes but different. If that makes sense… It looks like it should be a really good game, anyway, so I’m looking forward to this. 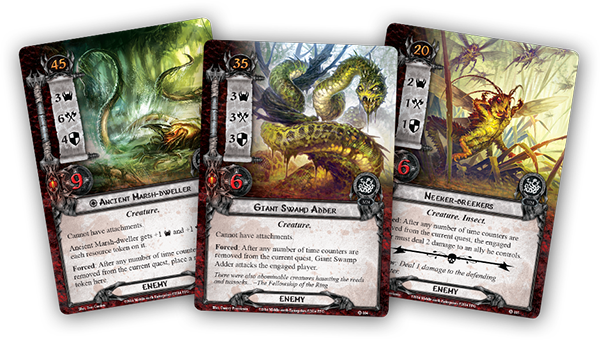 To my eternal shame, however, I’ve not actually played any of the Ringmaker quests yet, and have only played the first scenario in Voice of Isengard once, back in March! How shocking. I should probably set aside a weekend to delve more thoroughly into Dunland.

I’m still feeling in a RPG mood, something that has been prevalent throughout the whole year, really. Bringing us back to Warhammer, I took delivery of The Outer Reach last week, a book I’d ordered weeks and weeks ago. If you checked the link, you’ll most likely see why – the Necron Overlord plastered all over the front should tell you all you need to know!

In the absence of a codex for the Necrons (that is, an updated codex), I’ve been hungry for knowledge of these guys that I’ve spent about two months building and painting, but The Outer Reach marks my first proper look at Necron stuff. The illustrations alone make this book invaluable for me, and indeed helped to inspire my golden Necron Overlord, but something that I particularly enjoyed was seeing RPG stats for almost the whole range of Games Workshop Necron models! Wonderful stuff. The secondary function of this book then began to appear for me, and I’ve been considering it as perhaps ‘my new RPG’.

The Outer Reach is a supplement for the Deathwatch role playing game, in which the players take on the roles of elite Space Marines from a variety of chapters, who have been pulled together to form a kill team and tasked with eliminating a xenos threat. The idea does sound pretty cool, and I imagine it would hook a lot of people in. Added to that is the fact that all of FFG’s roleplaying games for Warhammer 40k are compatible with each other, there is a whole slew of options! However, one of the strongest criticisms of the line I’ve read is that the actual role playing opportunities are somewhat minimal, as the game is very much forced along by the need to basically hunt out and exterminate enemies, with very little else involved. In that respect, I suppose something like Black Crusade (where you play Chaos Space Marines looking to corrupt people) or Dark Heresy (where you play members of the Inquisition looking to root out heresy) would be the more interesting option.

Each of these games has a starter adventure that you can try out, and that for Deathwatch is called Final Sanction. Having looked over the pdf, I think it might be worth taking a look at, especially given the pre-generated characters mean it’s very much a matter of gathering your people and your dice and playing the game. The recent flurry of Space Hulk interest might also help, as this adventure sees your kill team going after a genestealer infestation, much as in that game. Well, anyway, we’ll see. 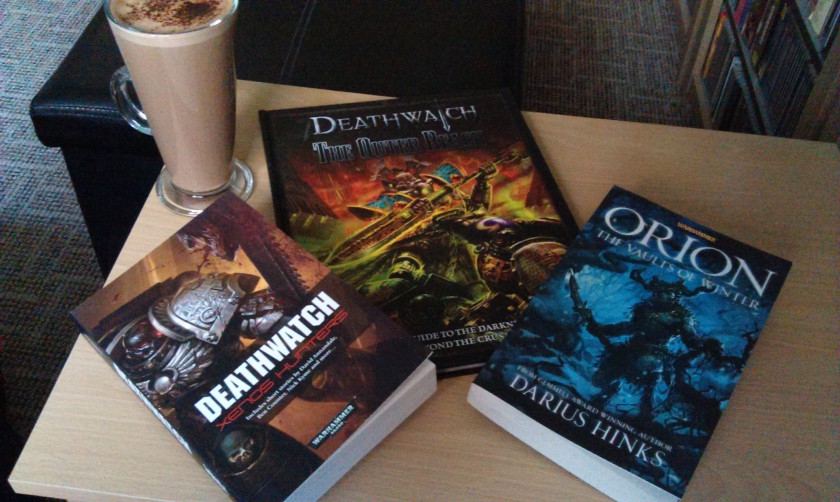 Also on the subject of Deathwatch, yesterday I read the short story The Infinite Tableau from the Deathwatch: Xenos Hunters. Again, I only got this because of the Necron connection. The story follows a kill team investigating the disappearance of a group of Adeptus Mechanicus (the technological subgroup in the Imperium) on an icy moon, and describes the horror they find when they get there. It’s pretty good; its appeal, for me, largely resting on an almost Lovecraftian Mountains-of-Madness feel as the kill team find the arcane piece of technology and so on. The story features the Necron special character Trazyn the Infinite, with some gore provided by a pack of Flayed Ones. Delightful!

I’m still reading Orion: The Vaults of Winter, on which I will provide more of a critique when I’m finished. For now, suffice it to say the story is heavy-going…

Anyway, I’m going to leave you with this video for Colt Express, a newly-released game of bandits fighting each other for the most loot…from a moving train…