Hey folks!
Happy Wednesday! I had a day off today, largely spent studying and moving furniture. An exciting day, indeed! The weather may have been awful, but even so, it has been an excellent inside-day!

I can heartily recommend Keemun tea from Twinings, incidentally. Lately, I’m finding that tea is greatly beneficial to my studies! You’ll remember, hopefully, that I’ve recently started on the next module of my OU degree, Exploring the Classical World? Well, I’m currently reading the Odyssey again, so today I broke out my A level notes and had a brief wander through to reacquaint myself. It is grand, I can highly recommend it to you all!

I’ve been looking at some more upcoming games, finally getting round to the next deluxe expansion for Call of Cthulhu – For the Greater Good.

While I’m not an Agency player – in fact, the only time I’ve ever done anything with those cards is use them for Domains – but this box does look interesting. Not just because it might be reason enough to finally investigate this faction, but

each of the game’s eight factions gain inexpensive support cards that you can attach to a story to tilt the odds of its resolution not-so-subtly in your favor. Combined with a variety of powerful new characters, including a new three-cost Ancient One, these attachments allow you to play to your strengths even as they make the game more dynamic and horrifying.

Sounds good, no? So that’ll be something to look forward to early next year.

The next big thing for Summoner Wars, announced back in September (I think), is the Alliances master set. Summoner Wars is a great game, though I have yet to feature it on my blog here. The game is effectively a combat card game for two players, with sixteen factions (I think) to choose from. Last year, we started seeing Second Summoner packs, to make the deckbuilding a more rich experience. The Alliances master set blends two of the existing factions together, and further mixes up the deckbuilding aspect of the game. Looking forward to welcoming this one into the fold! Look for a blog on the game at some future date, too!

With regard to playing games, I had a couple of games with Lord of the Rings. Checking my stats on bgg, it’s been just over four months since I last played this game, but it feels like so much longer! In actual fact, I don’t really remember playing any of those games, but still. I decided to take my Rohan deck for a Passage through Mirkwood, the original quest in the box, and was surprised when I just couldn’t get it going, and threated-out! I don’t think I’ve lost that game since my very first plays! After a brief re-set, I did manage to complete the quest in ten rounds, but still, I was shocked!

Had a pretty excellent delivery today, too – 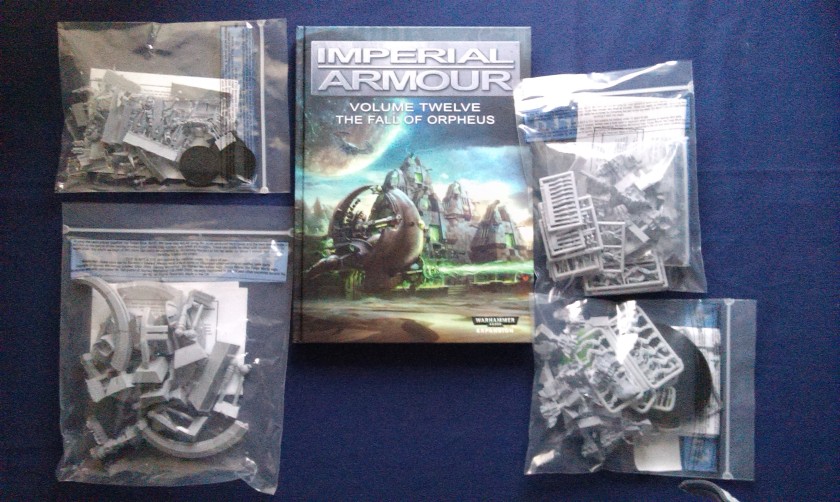 I’m still enjoying the Warhammer life, though of course, I have pulled back a little since my earlier gusto with the IP. However, I am hoping to get involved with the tabletop game at some point once the much-rumoured new codex arrives. In the meantime, I’ve been building up a small army, links to which you can find on my Necrons page over on the right. Today I took delivery of four resin models from Forge World, along with the Imperial Armour book that features the rules for these miniatures. I’m not a huge fan of resin, and some of these models are incredibly intricate, but still!

Earlier in the month, I was beginning to feel a bit like I’d rushed a bit too quickly into the Warhammer world, which is still the case, unfortunately. Don’t get me wrong, I’m not about to write off the last two months of expense and drop it as fast as I picked it up, but I feel that I’ve focused perhaps a bit too much on the Old World, especially during September. It’s still my new favourite thing, but I’m trying to restore some balance in my life, so I’m definitely pulling back a little now.

Anyhow, I’ll leave it there for now. Until next time!