The city of Cadwallon is infamous for its intrigues and power struggles. It is a city with a deep history, whose thick walls contain many hidden places of power and arcane relics. The lure of these mysteries makes Cadwallon the focus of yearning for many. The most exclusive circles of power in Cadwallon are occupied by numerous merchant corporations, known as guilds. They compete to control the city’s vast resources. Can the agents of your guild recruit the most influential citizens in the city and recover the most precious relics? Can you claim control of Cadwallon?

Welcome to Tuesday, everyone!

It’s game day again here at spalanz.com, and today I’m going to look at one of the great overlooked games available in the world today: Arcana!

Set in Aarklash, the same world as the boardgame Cadwallon: City of Thieves, and replete with the fantastical artwork of Paul Bonner (among others), the game is just excellent! The players take the role of guilds fighting for control of the city.

There are six guilds on offer in the game, each one with a distinct flavour. 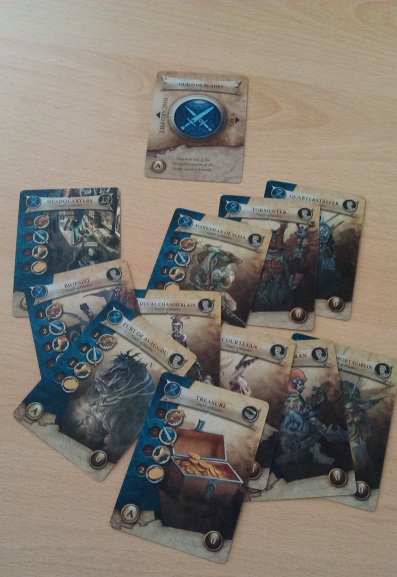 With your guild, you go out into “districts”, a deck of cards laid out on the table, and try to win the Stake cards there by deploying your agents. Depending on the number of players, there are either three or four districts on the table, the central one of which has the Ducal Jubilee card shuffled into it (more shortly). Stake cards come in a variety of Personalities, Locations and Relics, as shown below: 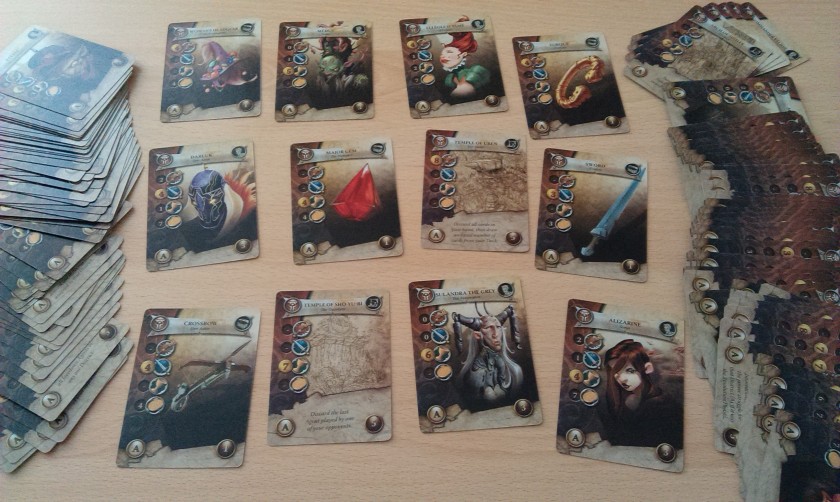 Each of the Stake cards has a value down the left hand side, with its “Main Arcanum” in yellow. You need to deploy one of your agents that has a high value, to equal or exceed the Main Arcanum of the Stake card, in order to win it. Some element of bluffing is involved, as each player has at least one Friendly district to which he can deploy his agents face down, as well as the Neutral or Enemy districts, to which he must deploy his agents face up.

In the above example, then, the Stake card Sallas Yesod has a Main Arcanum of 6. The Guild of Blades has deployed 3, and the Guild of Thieves has deployed 4. In this case, neither would win the Stake, so they stay there face up until the next round. If there had been a tie, all three of the agent’s arcana are totalled to determine a winner. However, each of the Guilds has a ‘crest’ card, shown earlier, which acts as a tie-breaker.

When you win a Stake card, it enters your discard pile, and you can use it in future rounds as agents to gain more Stake cards.

The game continues until the Ducal Jubilee card is revealed from the neutral district. This indicates that the game is about to end, and one more round is resolved. With the game over, the players total up the values of the Stake cards, and the player with the highest value has control of the city and wins. It’s really quite straightforward!

There is, however, more to it than that. In addition to agents, you get locations and relics in your deck, which you can use for differing purposes. Locations have specific effects that allow you to, say, deploy additional agents, while Relics allow you to “bribe” a Personality Stake card. That is, you play a Relic card along with one of your agents and use the Relic’s ducat value – along with the agent’s matching arcanum, and compare it with the ducat value of the Personality Stake card. Only Personality cards can be bribed in this way, but some have a zero ducat value, indicating they cannot be bribed.

Arcana is a terrific game, and one that I feel is genuinely overlooked a lot of the time. Not many people I talk to seem to know about it, or if they do, it is because of the other games set in the shared fantasy world. However, it is well worth looking into!

Not least because of the whole host of optional rules available in the core box!

We’ll start with the “customizing” rules. You may have noticed in the pictures posted so far in this blog all show cards with a letter A in the bottom left corner? Well, the game comes with over 300 cards in the box, a good proportion of which have cards with letters up to F on them, for all the differing rules that are available.

The basic game involves all the A cards, which gives each guild a starting deck of 11 cards. Fantasy Flight have included 9 cards for each guild with the letter B in the corner; the idea is that you can build a deck of 11 cards out of the two sets in order to strengthen what you would like to use as your strategy for the game. I like this especially because it adds something to the deck-building genre that I’m not aware of any other such game having – a customized set-up.

The C cards are Objective cards:

Objectives have a different back to them, and are doled out at the beginning of the game. Each player receives four cards and decides to keep two; they must then complete these objectives before the end of the game in order to claim the points on the bottom of the card (they’re all worth 6 points each). An objective card will tell you to claim a number of Stake cards from a specific fiefdom – shown under the Stake card’s name: 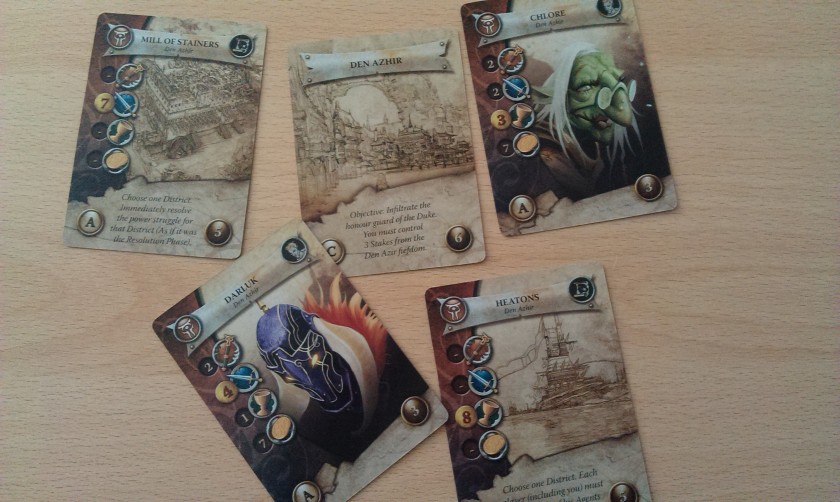 Objective cards are a really nice little side-quest style of play, and provide some nice bonuses to the final scoring!

The Militia are denoted by cards with a D in the bottom-left corner.

I must admit, I’ve not actually played with this particular variant of the game, so can’t comment on its utility. There are six cards – two Captains and four Soldiers – that are shuffled at the beginning of the game and placed in a separate deck. The idea is that players can, if they so wish, discard a Stake card from their hand to gain the support of the militia at a district, by playing the top card of the deck there as an agent. At the end of the round, all militia cards are put back into their deck, which is reshuffled.

Given the fact that the militia aren’t particularly amazing stats-wise, I find it difficult to justify their inclusion, to be honest. Granted, if you’re playing with Objectives and you are desperately trying to win a specific fiefdom card but don’t have the required Arcanum, it might be worth trading off a Stake card for the blind draw of a militia card, but I’m not really convinced. If there were some additional effect they brought to the table, such as breaking ties or something, then they might be more compelling, but as it stands, I think I would be inclined to keep my Stake cards.

E is for the Guild Masters: 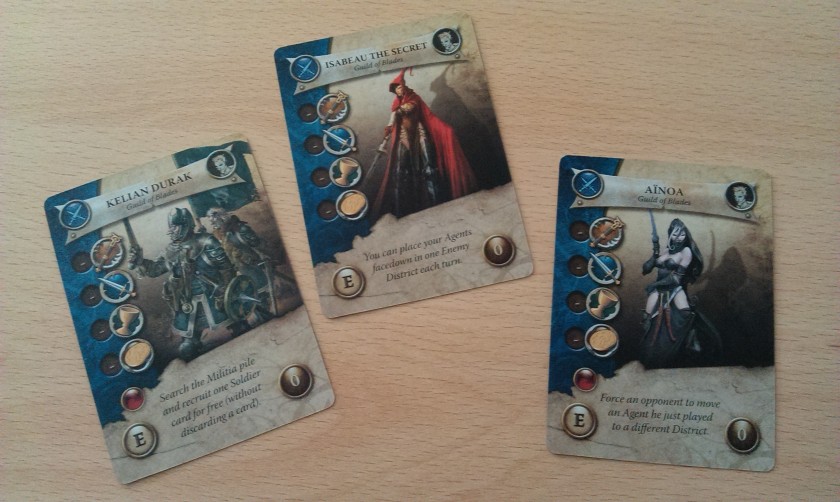 Each Guild comes with three Guild Masters, one of which you choose before the start of the game and place it next to your Guild Crest card. These cards provide your guild with a unique ability that is either once-per-round (denoted by the purple icon above the letter) or always-on. Further, each guild has at least one Guild Master that specifically interacts with the Militia variant described earlier. While they’re all variations on a theme, I do like these cards. They provide some useful boons that you can use, and add yet more depth to the game.

And finally, Random Events are from the F pile:

The Ducal Jubilee turns out to be but the first in the many public holidays celebrated in Cadwallon! There is a bit of setup here: at the beginning of the game, you shuffle all 12 of the event cards, then take three, shuffle the Ducal Jubilee into those, and place them on the bottom of the event card pile. As normal, the Jubilee denotes the last round. However, the events add a nice sort of area-effect to the game, such as the Day of Law, which prevents bribery from taking place, or the Festival of Lanterns, where all agents are placed simultaneously.

Finally, there is the option for Tactical Discards (no letter). When you win a Stake card, you can place it under your Crest card rather than into your discard pile. I find this can be really useful if you’re sensing the Jubilee is close, and want to stock up on expensive Location cards but don’t want them clogging up your deck, for instance.

As I said before, I think Arcana is a tremendously good game. It’s a deck-building game, but has such a unique feel to it that you won’t feel like you’re playing Dominion or whatever. For starters, you don’t just buy cards from a line-up, but compete for them. Indeed, the way you go about winning Stake cards does have an element of the cutthroat about it, which I for one really enjoy. My very first game with this was a bit manic as we didn’t quite understand the rules, and ended up having something resembling Snap going on, as we were both throwing cards down and winning Stakes all over the place. But that was one hell of a game! Almost like a permanent Festival of Lanterns, but on acid…

I must say, however, the rulebook isn’t precisely easy to follow. Don’t get me wrong, it’s no Death Angel, but it wasn’t particularly clear on the first read-through how things like bribery worked, and seems to be almost over-complicating itself. I’m not sure if part of the problem might be due to the fact that Fantasy Flight are acting as distributors for a French game, but anyway, familiarity with the game definitely helps.

I mentioned the board game City of Thieves at the top of this blog, and the two games are quite closely linked. Indeed, I had ordered City of Thieves online when I was reading a review that mentioned this game as the way one player and his group choose who goes first in the board game. That just sounded absolutely tremendous fun, and was the reason why I bought this game. A couple of years later, and here I am – having sold the board game, I have kept hold of Arcana because it is an absolute delight!

As a final word on the game, I’d like to mention just one other small point. This game is complete as it stands – with effectively six mini expansions in with the base game – and has not had an entire glut of additional content released, because it stands perfectly well on its own. You can have a whole ton of fun with this game, without the need for more stuff coming at you every other month, or whatever.

Oh yeah, and a final-final point I’d just like to mention – this is a card game with no extra bits: it’s just a box with a mass of cards in it. Don’t get me wrong, I love the card games from Fantasy Flight, but sometimes, it’s nice to play a card game that is precisely that – no tokens and chits, no dials, nothing but cards!

So go on, treat yourself to an amazing and fun game today!