Hey everyone!
It’s Tuesday, which means it’s once more game day here at spalanz.com! I know, I’ve missed it too. To mark this triumphant return, I’m going to feature one of my favourite boardgame expansions ever produced: Something Wicked! 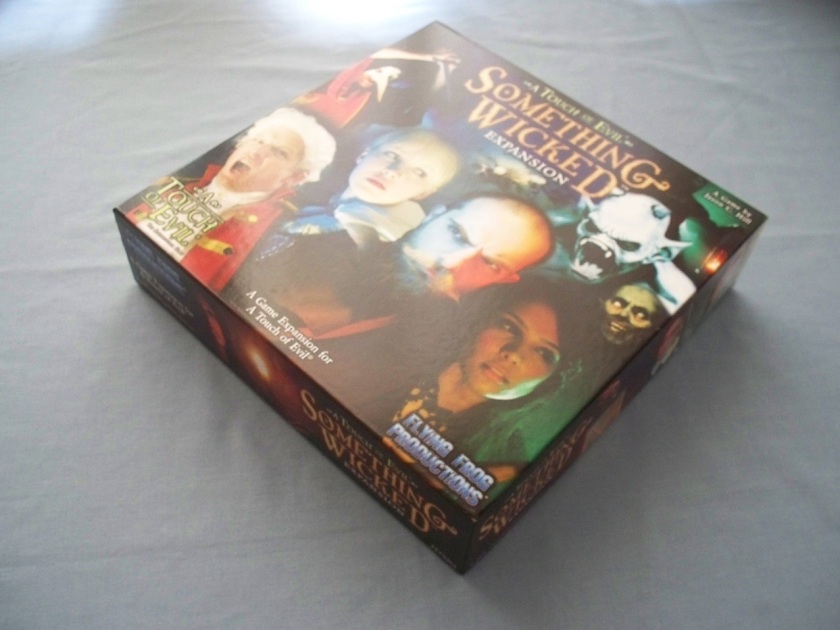 Something Wicked is an expansion for A Touch of Evil, one of my all-time favourite games. I did a blog on that game a whiles ago, you might remember. Well anyway. Something Wicked can pretty much be described as ‘more of the same’, with more cards, more heroes, more villains, and a new board with more locations to explore.

Awesome, huh? The new board features three new locations around Echo Lake – the Monastery, the Inn, and the Forbidden Island. The Monastery comes with a deck of items that you can buy, like the Blacksmith in the base game. The locations are the usual mix, with items available, attacks, and skill tests.

Some of these attacks introduce what has now become a Flying Frog staple: the Order of the Crimson Hand! The cult has already kinda been seen in the base game, with the Assassin enemy in The Manor encounter deck, but here we have the birth of a legend! In the expansion, the cult is most often to be discovered at the Monastery, but they pervade the expansion through the Mystery cards “The Order’s Influence”, which triggers a specific effect depending on which Town Elders are still alive.

The Crimson Hand attack players if they linger at the Monastery, and have the peculiar mechanic whereby a minion marker is placed there and won’t leave the board until defeated. In addition, the Crimson Hand are minions for my favourite villain currently in this game.

The four new villains are what I like the most about this expansion. We have the Banshee and the Gargoyle, the Bog Fiend and the Unspeakable Horror. The latter two are, for me, the best two villains in the entire run for this game to date!

The Bog Fiend features a wonderful mechanic called the Sinking Countryside, which can make the locations on the board disappear as the Bog Fiend gains control over the town of Shadowbrook!

Being a big Lovecraft fan, however, the Unspeakable Horror is without a doubt my favourite. All manner of creepiness goes on with this guy – his Crimson Hand cultist followers draw summoning circles to enable them to bring him forth into the world, and in the advanced game, these circles will be turning up all over the place! 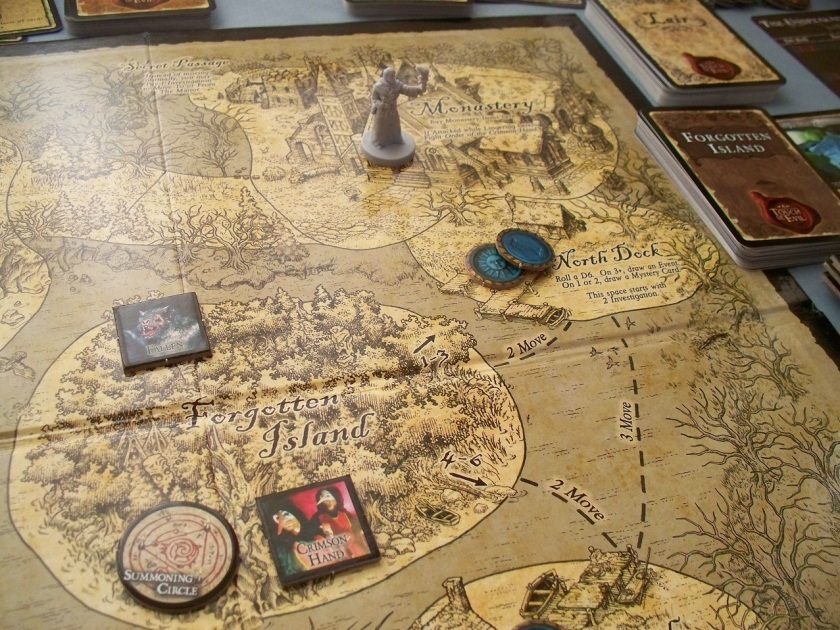 If a summoning circle would ever be placed where one already exists, it is replaced by a Void marker. Voids can be used by players to travel quickly across the board, as they all connect with each other, but you might be attacked in there by the Unspeakable Horror himself! Fabulous stuff, let me tell ya!

The new heroes are pretty decent, and again come in the vein of “more of the same” – none appears to be overpowered, allowing for perfect integration with the core set. I think this is something important to mention about the whole expansion, really – it is so well-balanced that it works wonderfully across the entire line!

Around the same time that Something Wicked was released, FFP also brought out Hero Pack 1, which is pretty much entirely what it says, it’s a box with four new heroes, along with one new villain, and a few more cards that can be added to the core set.

The heroes in Hero Pack One are a nice mix, though they do include Adrianna, the blind Foreign Traveler, who has, I feel, the slightly overpowered ability to roll fight dice and resolve hits before her opponent. Depending on what you manage to collect throughout the game (bearing in mind she cannot use books), Adrianna can be rolling a whole ton of dice and kill even a Villain before can fight back!

And speaking of villains, the one included in Hero Pack One – the Necromancer – doesn’t have his own minion chart, instead using that for the Vampire from the core set. A bit annoying, that – but a few of the fans have come up with various other options, which you can find here. I quite like this, anyway, and have used it to play with this villain.

However, there is a lot to be said for including it in your gaming. The way Flying Frog games work, the “more of the same” route is definitely the way forward, I’d say. While I appreciate the big games (such as Runebound), whose expansions offer a completely new gaming experience, there is definitely a lot of goodness in an expansion that you can basically tack onto the core set and carry on enjoying. The balance is so perfect that the entire thing is interchangeable, so you can use the new heroes and villains with the core set, or just the core set heroes with the new villains, or whatever you like. It’s just amazing!

I’ve said it before, of course, but FFP games are just drenched in theme, and Something Wicked stays true to that. The Order theme is great fun, but incredibly strong when you use the Unspeakable Horror. There are just so many great things to enjoy about this expansion, it’s quite simply a required purchase for anyone owning the core set!

Buy it from amazon:
Something Wicked
Hero Pack One