Welcome back folks!
Following yesterday’s modelling adventures, today I moved on to painting – I had been planning to do both, but eventually spent so much time on the Daemon Prince, I didn’t have the time for the Fiend of Slaanesh. That will form the coming week’s adventures. In keeping with my intention to walk through miniature painting “for dummies” and share my own journey on learning how to do this stuff, let me take you through it!

First, the miniature is primed with Chaos Black spray, which leaves a matte finish that allows the paint to adhere better. I really like the matte finish these miniatures have, and could happily leave them as they are! But onwards! Last night I had been planning to do an almost-purple skintone, but after checking out some awesome paint jobs online (Slaanesh-purple, Alpha Legion blue, and this totally awesome black and grey!) I decided to go with an almost Orc green. And thus, I began! 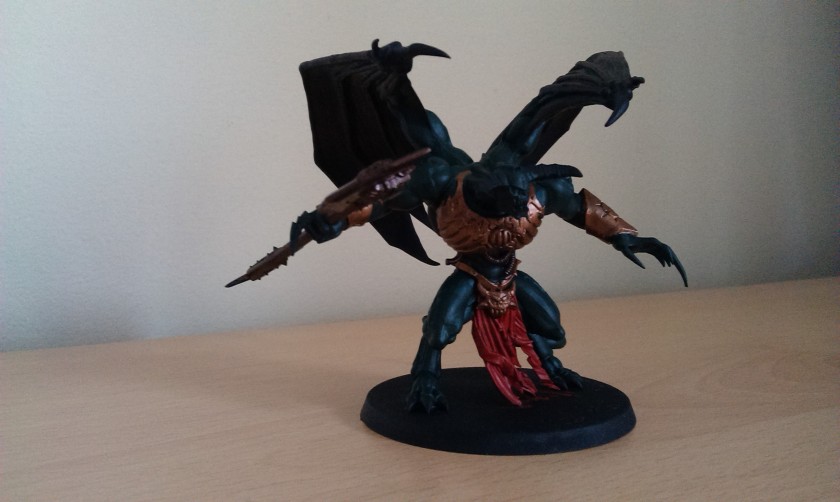 Basecoating the miniature was a little problematic for me, as it is the most detailed figure that I’ve painted to date. Rather than going through in layers, I decided to apply basecoats to specific areas, so the skin was done in Caliban Green, the armour in Balthasar Gold, the axe in Warplock Bronze, and the combat skirt in Mephiston Red. I’ve said it before, I don’t have the steadiest hands, so I was really impressed with my ability to get the armour done so well, I must say!

He looked pretty good in those base coat, and I would have quite gladly have kept him as was, but I wanted a more convincing scheme. And I needed to do something with his wings and his claws/horns. After some thought, I decided to try something perhaps a bit different. First of all, I used a watered-down Screaming Skull as a kind of base coat on the wings, to lighten the black without making it too light, then washed the entire area in Biel-Tan Green. I also used that shade on the skin, though it didn’t really add all that much I felt, as the base coat was already quite dark. In addition, the combat skirt was washed with Carroburg Crimson, to help give the folds definition. 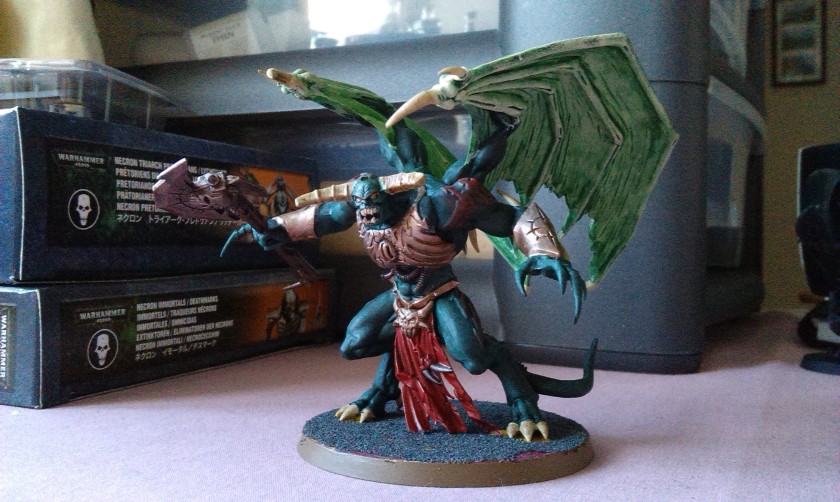 The horns, claws and the bony wing-tips were all done in Ushabti Bone, using multiple thin layers to help build up a smooth look. Then came the details! Since I did the Chaos Lord from Battlelore, I have become a really big fan of drybrushing, so first I used more Ushabti Bone to drybrush the bony ribs on the wings, then Tyrant Skull on the horns and claws. Now, I hadn’t realised until Friday that you can drybrush with any paint, so thought I’d give it a try, and it really worked! Just dab it around on a tissue as you would with the dry paints, make sure the brush is fairly dry, and then just lightly stroke it on the area. Marvellous!

The armour I drybrushed with Golden Griffon, though unfortunately it lightened the coppery colour that was achieved by the Balthasar Gold. But still, it looks pretty nice and burnished, so I can’t complain too much. I’m really pleased with the effect on the axe, however, which was drybrushed with Runelord Brass over the blade and rivets: 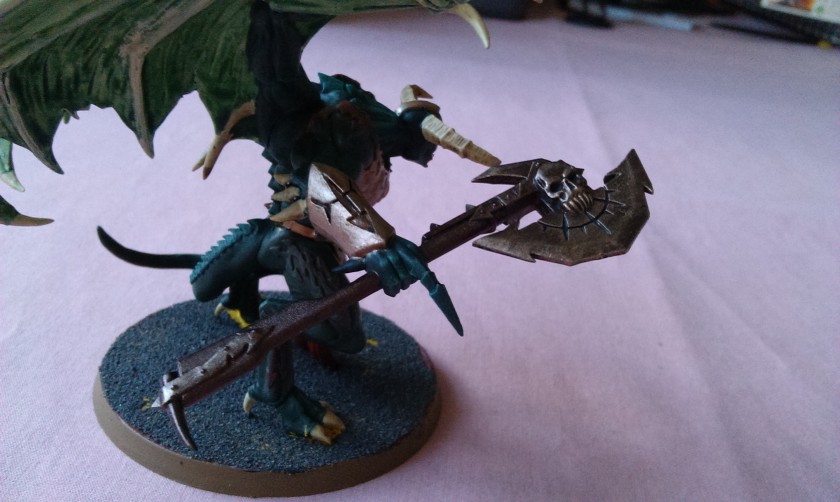 Nice, huh?! For the skin, I used Kabalite Green to drybrush, and I think it worked well with the earlier shade to provide better definition to the skin. For the bonier ridges, such as his right hand and spine, I further drybrushed with Sybarite Green, adding more highlights to help provide a textural contrast between the skin and the harder bone. The figure has some sort of skin decoration on the thighs and biceps that I wasn’t entirely sure what to do with, but eventually settled on the idea of a branding – I then very lightly drybrushed these raised areas with Mephiston Red, making sure to keep the green tone on them while providing a dark red “blush” effect, as if he has only just been branded or something. I thought it was a good idea, anyway!

The face was a big problem for me, as it was such a small area I was really quite nervous about being able to do it all. But then I decided to just use the Sybarite Green drybrush again, which gives the face its definition and adds to the effect of the figure as screaming, or bellowing:

I like it, anyway! The eyes were dabbed with Fire Dragon Bright, and the teeth were another job with Ushabti Bone. Really difficult to do, that, given my unsteadiness! But I got a pretty decent effect all the same. The small “teeth” that seem to be part of the belt I based in Leadbelcher and drybrushed with Runefang Steel to give the highlight – I thought metal teeth would be bizarre enough to add that extra something to the whole. As a very final effect, I washed the areas of bone, claw and horn with Agrax Earthshade to take the bright edge off those areas, and give it a more natural feel.

Finally, the base. I dreamed up the idea of a lava feel, so applied a base coat of Khorne Red with some bits and pieces of Yriel Yellow. When that dried, I put some PVA glue over the base before throwing on some black sand that I happened to have anyway, but it didn’t work out quite as I’d hoped – it’s a little too flat, don’t you think? Don’t get me wrong, it’s okay, but I just feel like it should have been awesome given how well the actual miniature itself went! So, this may not be the last you see of this chap! I’ve been looking into miniature basing kits, so it’s not necessarily over yet!

This model is really nice, I’m really pleased with it! Took about an hour to assemble fully, and probably about four or so hours to paint, allowing for drying time and whatnot. And I only used, what, 18 different paints because I have them, it’s not like it was entirely necessary or whatever!

I’m feeling increasingly confident about this whole business of miniature painting and assembly, so I’m looking forward to Shadows of Brimstone even more now! That said, of course, I’m also loving this whole thing for its own sake – whether I ever get into playing the tabletop game will remain to be seen, but still, I have been enjoying this whole experience like you wouldn’t believe, and am really excited for what’s coming next: NECRONS!

5 thoughts on “Painting Chaos, part one”