Morning everyone!
Tuesday is game day, of course, and here at spalanz.com I’m going to talk to you all about the card game Gloom from Atlas Games. 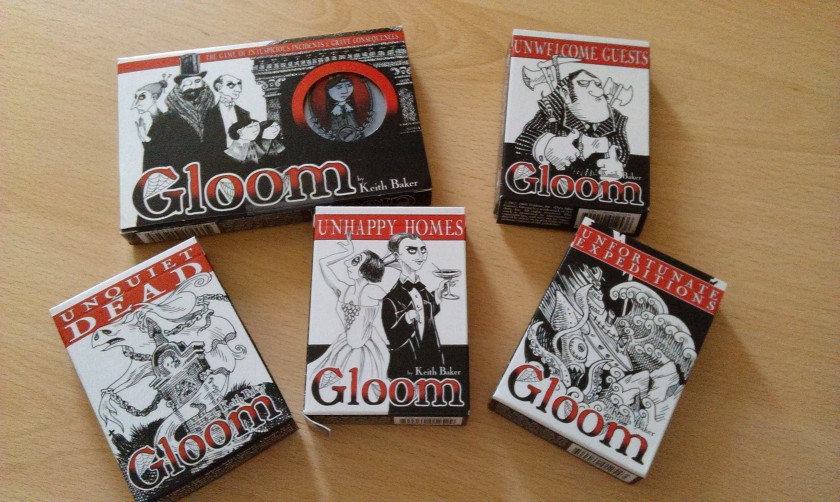 The game is ten years old this year, and is shortly due to have its second edition printed with new art and errata. However, it’s been a popular game for me for a while now, so let’s take a look in today’s blog!

The game is fairly straightforward. Players control a ‘family’ of five cards (shown below), and the aim is to kill off those family members in the worst way possible – at the end of the game, the person with the lowest score wins. Wonderful stuff!

On each turn, a player can play two cards or discard two cards. The cards are all transparent, and consist of modifiers, events, and untimely deaths. Modifiers give your family members a score – the object is to play cards with negative points on yourself, and those with positive points on your opponents:

In addition, event cards can alter the course of the game, such as preventing you from playing an untimely death, or removing family members from the game: 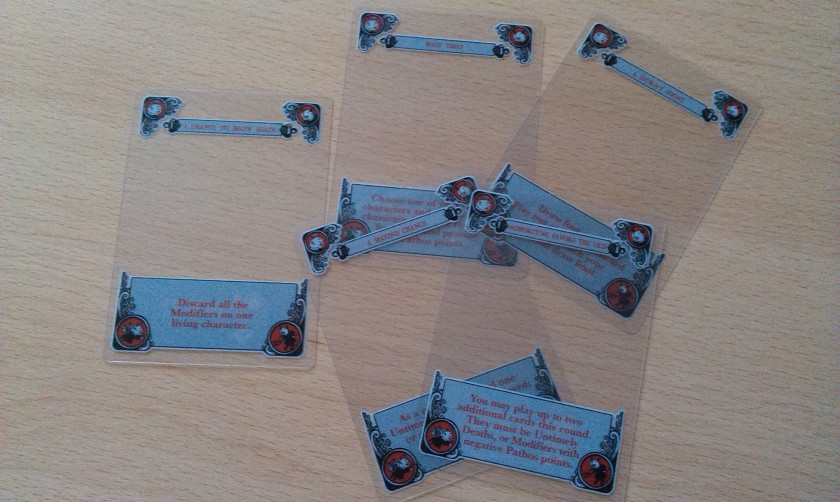 Finally, untimely deaths kill off your characters. Strategically, you need to kill off your family members as soon as you can, when they have as much of a negative score as you can get. The game ends when one person has killed off all of their family, and points are only scored by family members who are dead.

Yes, it is indeed a gloomy game! However, this is really only the basic mechanics of the game. The real fun in Gloom comes from telling stories – just why was Grogar the teddy-bear devoured by weasels? It’s up to you to tell the tale! Take a look as Wil Wheaton & co. have a game:

There are (at the time of writing) four expansions for Gloom, as shown in the picture earlier. Three of these bring new families to the game, as well as new mechanics! We start with Unhappy Homes, which adds the mechanic of Residences to the game.

Residences are, well, your family’s home, upon which you can play a new type of modifier, Mysteries: 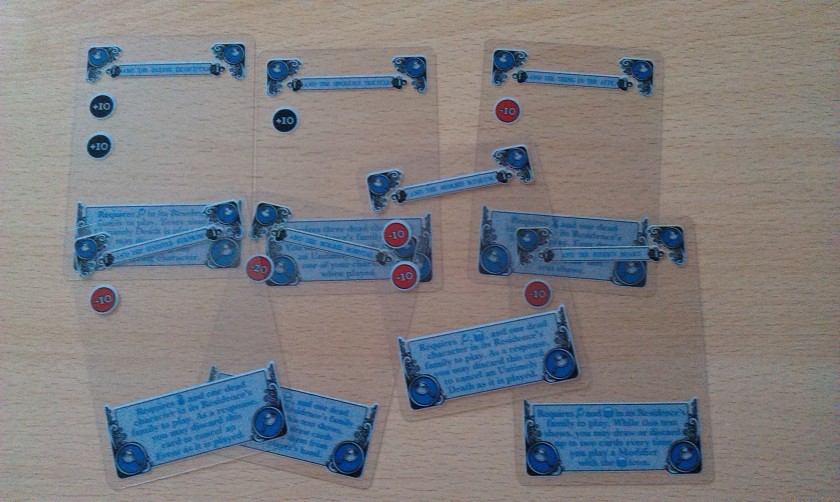 Mystery cards have a blue text, and can only be played on Residence cards. They add negative points to the Residence, and can bolster your score at the end (though, obviously, you don’t need to kill off the Residence!). They also give you effects similar to Event cards.

Unhappy Homes was followed by Unwelcome Guests, which add another new family as well as the new mechanic of unwelcome guests:

These chaps start out the game in the centre of the table, and are brought out when specific cards are played – each guest stipulates which type of card they follow, such as “Unhappy Holmes”, who follows Untimely Death cards. This mechanic of “following” a card type means you gain control of the guest when you play its “trigger” card. It basically gives you more people to kill off, so you have the potential to end with a bigger (lower) score at the end.

Unfortunate Expeditions came next, which brought the seventh family to the game, as well as the mechanic of Expeditions:

Expeditions start the game at the top of the table, and are brought into play when modifiers with the matching expedition symbol in the right corner are played:

Expeditions offer a universal benefit to all players, but only one such card can be in play at any time, adding another level of depth to the game.

The most recent expansion came out last year, Unquiet Dead. Instead of a new family, Unquiet Dead brings two new mechanics into the game, Stories and Undead. Stories can be claimed as soon as their conditions are met, and can change hands throughout the course of the game. They offer a benefit to your family, provided you can keep hold of them until the end of the game:

The Undead mechanic provides new modifiers to play on your family members, where they count as both living and dead:

Undead characters can still have modifiers played on them, but count as dead for purposes for final scoring. Because they cover up your family members, your opponents will always be aware that you have Undead cards in your hand, but anyway…

Finally, for International TableTop Day 2013 a special promo pack was released to be given away at participating events, and included cards with a TableTop theme, including Wil Wheaton and Felicia Day as uninvited guests (though, come on, who wouldn’t want this pair as guests at a game day?!)

I’ve played a lot of Gloom over the years, and have always enjoyed it for the hilarity of the modifiers that can be played on your characters – who wouldn’t laugh when a character is mauled by manatees?! – but I absolutely love the storytelling aspect of the game. If you can get some friends who enjoy a bit of improv, this game is an absolute blast! The mechanics are straightforward and simple, allowing you to concentrate on enjoying the stories you weave about your unfortunate family, and while I haven’t yet tried it, I imagine playing with all four expansions wouldn’t exactly make the game unwieldy…

In addition to this game, Atlas Games have released a spin-off version, Cthulhu Gloom! Yes, since Lovecraft’s work went out of copyright, there have been all manner of game versions of Cthulhu, and Gloom has not escaped! I intend to look at Cthulhu games as a separate blog, however, but I shall content myself for now by telling you all that Cthulhu Gloom is definitely worth getting as well, incorporating a lot of the elements of the original game into a wonderful eldritch nightmare! Fabulous!

It’s an absolutely wonderful little game, I can heartily recommend you get your paws on it!