Hey everybody!
Seems like it’s been a long time since I talked about Star Wars here. Today, however, I’m going to briefly talk about possibly the biggest news since the mid-90s Prequels announcement, the new sequel trilogy.

There is actually a reason why I haven’t raised this subject since I started this blog three months ago. I’m basically not that excited by it. Yes, that’s right! I am a huge Star Wars fan, but I am not particularly looking forward to seeing this next batch of films. Of course, I’ll be going to see them, possibly even more than once, but I am not fired up with the same enthusiasm that I have been for other projects in the past.

I can’t deny, of course, that part of the reason is due to the decision to eliminate the established Expanded Universe stuff, which I still feel does a great disservice to the talented men and women who kept this franchise alive when it had otherwise died in the mid-80s. However, there is also the fact that I dislike the need to bring back the Big Three – I feel a sequel trilogy would have been a lot better had it just let go of those shackles. Of course, that’s not to say I dislike the Big Three – Luke Skywalker has always been, and will always be, my favourite character in this universe – but I feel that, had the creators struck out in an entirely new direction, it could have been just the breath of fresh air needed following the past couple of decades of storytelling. Remember how fresh Knights of the Old Republic felt? And Legacy? Even the Prequels, to an extent.

There seems to be a disturbing trend in Star Wars, that constant need to emulate rather than innovate. We see stories that harken back to the original trilogy, with tropes and whole arcs trotted out time after time, whereas we could be seeing completely new stuff that could blow our minds in the same way the original film blew minds.

This morning, I came across an article on io9 that showed Mark Hamill resplendent in full beard at the premiere for Guardians of the Galaxy: 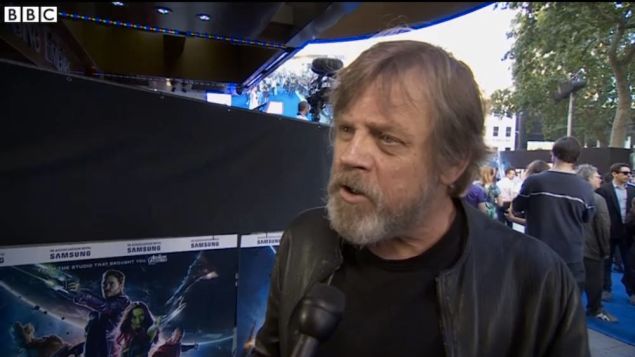 Remarks such as “very Obi-Wan-ish” have of course been made, which leads me more to despair than anything else. The saga already has an Obi-Wan character: his name’s Obi-Wan Kenobi. Why do we need to turn Luke into Obi-Wan? Why doesn’t Luke have any imagination to spend his retirement like Hugh Heffner, maybe? Or anything other than a desert hermit?!?! Jeez.

However, there is one glimmer of light at the end of the tunnel, and I must admit that this glimmer is what has both piqued my interest as well as prompted this blog. The rumour mill has of course been working overtime since Disney bought the franchise and announced new films, but something that appears to be holding the most ground at the minute is the idea that the film centres around the search for Luke Skywalker. The idea that, firstly, there is something wrong in the galaxy that requires Luke for resolution, not to mention that Luke is somehow missing, is really very intriguing to me.

It also means, of course, that one of my main gripes about discarding the EU might not be necessary. Episode VII is apparently set roughly 30 years after Return of the Jedi, so 34 years after A New Hope. [SPOILER ALERT] Luke’s wife Mara dies 40 years after A New Hope, but depending on whether they’re going to shift things around in the timeline, it could well be that Luke has retired from public life following this incident? [END SPOILER] I haven’t yet read Crucible, so I don’t know how the now-Legends EU has left the Big Three, but I think that’ll be on my list shortly.

Anyhow. I’m not particularly following the rumours for the new film with any degree of seriousness, so it’s debatable whether there will be more to add here, but you never know – as we get closer to December ’15, I might just see the fanboy within emerge, and might get way over-excited about the whole thing!

We shall see, I guess…