Happy Saturday, everyone!
Yeah, I’m back for another Saturday evening ramble! Oh, you love it. I want to talk about some new games that are either on the horizon or else just new to me, as I feel that I haven’t talked about new games for a while. Being off work invariably means I go out and look at history stuff, hence the promulgation of history blogs lately! So to restore balance, let’s go!

First up, some really left-field news from Fantasy Flight came on Monday, with the announcement that Dungeon Fighter is back in stock. What now? I didn’t even know what that game was, much less that FFG had published it?! Reading through the pages on their site got me desperate to play it, as I love a good goofy game like this every so often. So I snapped it up on amazon, and it arrived yesterday. So far, I’ve not actually played it, but hopefully that will change in the coming days…

And then they announced two expansions to it on Wednesday! How very FFG, to throw out expansions so quickly! The game looks amazing, as I said, and the expansions look equally hilarious, so I’m pretty sure this will be lots of fun!

And then, we have this!

Descent is a game that I haven’t really talked about at any length yet, but it is nevertheless a really nice game. Set in the Runebound universe of Terrinoth, it pitches a group of heroes against the Overlord, who kind of acts like a much more antagonistic Game Master in a RPG. I’ve barely played this game, but am nevertheless kinda hooked on it because of the fantastic fantasy setting. The game is currently in its Second Edition, which has streamlined a lot of the rules from what I can gather, and since January, FFG have decided to release heroes and monsters from the first edition game in these Hero and Monster Collections. A really nice idea, that, as the Conversion Kit to allow folks who already own First Edition to re-use their minis in the new game only has the cards, people who only own Second Edition can run with classic monsters in their games! However, these collections aren’t simply re-prints of existing miniatures, but there is also new content to be used in your games! A really fantastic idea, and yet more proof that the company is really supportive of this game. The fourth collection, Guardians of Deephall, has got some really cool stuff in it, and I’m looking forward to this one lots! 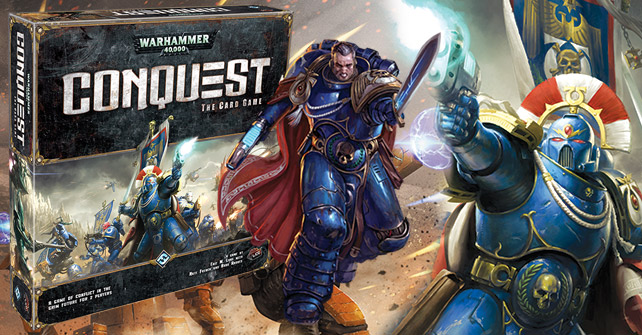 Onwards to the latest addition to the LCG stable, Warhammer: Conquest! Announced back in March after furious speculation as to the next LCG’s theme following the demise of Warhammer: Invasion last November, I was initially torn about investing into this, largely because of the theme. I’m a huge Warhammer Fantasy fan, but have never really been all that interested in Warhammer 40000 (despite owning Horus Heresy, the most expensive game I’ve ever bought!). I think the whole sci-fi theme it appears to have just doesn’t suck me in all that much. However, I have recently decided that I would, if nothing else, buy the core set of the new game, and see what it’s like.

I was, however, quite surprised by this week’s announcement of the first War Pack – I mean, the core set isn’t even out, yet! I suppose it goes to show the confidence that Fantasy Flight has in their LCG model, they don’t need to wait to see how sales of the core set do before deciding to expand the game. While, as I said, I think it’s a pretty foregone conclusion now that I’ll be getting the core set, I’m not as-yet sure I’ll be purchasing the expansions. Of course, I said that about Call of Cthulhu, then ended up buying every single thing for the game, so anything is of course possible!

Speaking of LCGs, a preview went up this week for the next cycle for Android: Netrunner, too. The game did phenomenally well when it was released nearly two years ago, and is currently looking at its third cycle of Data Packs. This was another LCG that I told myself I would limit myself on – this time, to the core set and first cycle – and have so far been snapping up the releases in fairly short order. The third, Lunar cycle has yet to actually be released, however, but I’m fairly sure I’ll be snaffling these guys as they come out, too…

Moving away from strictly ‘new’ games, now (and, indeed, from FFG), I’ve had a massive order of Pathfinder stuff delivered this week. I’ve been banging on about this for ages now, but I really find myself sinking quite easily (and heavily!) into the setting! My library of the things is looking pretty impressive now, so I’m very pleased for that, but even if I don’t find myself launching into a game anytime soon, it has been of tremendous help in inspiring me for my fantasy story that I want to start writing!

Ah yes, the fantasy story. It’s slowly coming together! Rather than my usual modus operandi of just lurching headlong into writing something, I’m actually taking the time to plan things out this time, and have the ‘rules’ for my world written down before I actually put fingers to keyboard and type. But it’s getting there, and hopefully soon I shall be sharing some wonderful stuff with you all!

Finally, I thought I’d share with you some hilarious news: I am a Prince of the Forest!

The Flying Squirrel game I mentioned to you a long time ago, in case you’re wondering!