Hey folks! After what has been a very exciting week for the heritage hunter within me, I’m reverting to type now for the more geeky side of life – now that I’m not spending most of my time behind the wheel of my car! As I’ve mentioned numerous times since I started doing these blogs, I’ve been re-reading the Star Wars fiction from the time of the classic trilogy onwards, and have now gotten to eleven years after A New Hope, and one of my all-time favourite graphic novels: Crimson Empire! 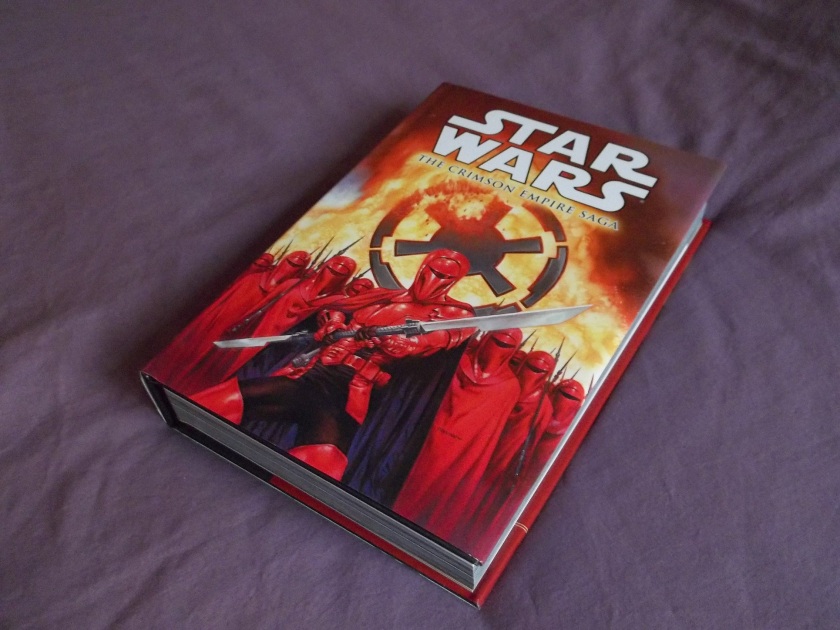 You may recall, of course, that Crimson Empire was the first graphic novel I read? Well, if you don’t, shame on you! Go back and read my blogs! Ahem. Anyway, back in the good old, pre-prequel days, I came across this book and it really just blew me away. It tells the tale of two former guardsmen from the Imperial Royal Guard, Kir Kanos and Carnor Jax. 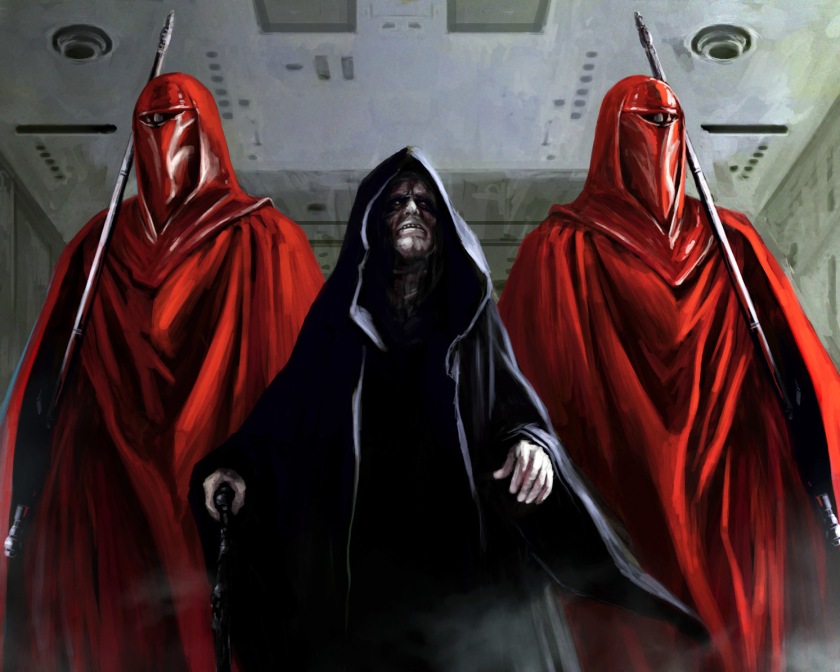 The initial story arc of Crimson Empire was published between December 1997 and May 1998, and has been widely praised for the massive fight scene at the end between Jax and Kanos (it takes up over eighty panels across twelve pages). For me, I think it is most memorable because of the story itself. Traditionally, the Empire have been the baddies, and yet here we have a tale where the protagonist is a Royal Guard. By making Kanos honourable to his duty, he becomes a good Imperial, which is something that has been taken up a few times in comics since, but never quite as breathtaking as it is here.

The whole Crimson Empire saga was written by Mike Richardson and Randy Stradley, the president and vice-president of Dark Horse Comics, respectively, so you don’t get much more impressive than that! The original story idea came from Stradley while he worked on the Marvel Star Wars run in 1984, of having an Imperial Guard out for revenge following the Emperor’s death. The story was not allowed, proving that you just have to start your own company if you want to produce your own stuff! The art of Paul Gulacy and P Craig Russell really helped to define what Star Wars comics were for me in these early forays. Much like that of Christian Gossett as I discovered Tales of the Jedi. There is an almost cinematic feel to the artwork, particularly in scene transitions and the like, but perhaps the single most amazing comic art I have ever seen is the reveal of Kir Kanos in the squall on Yinchorr, just before the climactic duel. That is just fantastic! It is, as always, the story that I’m so engrossed with, however, and the Crimson Empire story is just incredible.

As mentioned already, it takes place in 11ABY, where the New Republic is established but still struggling to make headway in the outer systems. The Empire is crumbling, but is now headed by one of the Emperor’s Royal Guard, Carnor Jax. It soon becomes apparent that Jax is in this position through subversion, and Kir Kanos is out for revenge. There is a major plot point that depends on readers being at least familiar with the events of Dark Empire, as Kanos’ flashbacks tell us how Jax came to rule the Imperial Remnant.

There is a wonderful feel of the fringe within this story. Jax knows Kanos is aware of his treachery, and his bounty has made Kanos a fugitive of the Empire. As such, Kanos is hiding out in the Outer Rim, where he attracts the attention of some New Republic envoys for killing a group of Imperials. As we learn more of Kanos’ story, Jax moves in to capture him, leading to a final confrontation on the training world Yinchorr, and that climactic duel between the two. 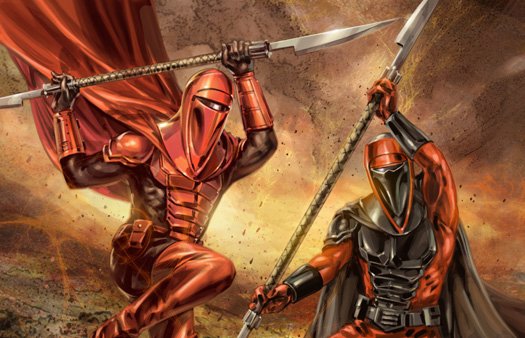 The issue of just how cool is Carnor Jax’ armour?! aside, the story is intense, a bit moody, but doesn’t forget that this is a Star Wars story, as many similar tales are wont to do. The Imperials lead a raid on the New Republic base on Phaeda, where we first see Kir Kanos in his full guard regalia. There is a massive pitched battle, during which Kanos shoots a TIE fighter out of the sky in what has become true over-the-top Star Wars style.

Aside from two panels in which Luke Skywalker appears in Kanos’ memories, the only movie character to appear in this story is Wedge Antilles, now a general in the New Republic. This made such a massive impression on me as a lad, showing that there could be really compelling stories in this universe that do not rely on the Big Three. It’s something that I wish we could see a lot more of, rather than the odd tale here and there.

Something else that I wish for, the characters of the Crimson Empire series are largely confined to this series alone. While Carnor Jax is later said to have apprenticed under Lumiya as a Dark Jedi, the rest of the cast appears to exist in its own little vacuum. I would have liked to have seen Mirith Sinn referenced by someone in the New Republic, for instance, but never mind. Even Kir Kanos himself, while making an appearance in the Star Wars Miniatures Game in 2010’s The Dark Times set, only exists within the Crimson Empire world. Unless you want to count the RPG module Nightsaber, where Kanos appears on Dathomir under the alias of Burr Danid. Interestingly, however, the planet Yinchorr was revisited in 2000’s Jedi Council: Acts of War, where we see the place before the Imperial Training Center was established.

But that’s all a very minor point, and in no way detracts from the story! There is so much to enjoy here. First and foremost, as with a lot of the earlier Dark Horse stuff (ie, before the prequels came out), there is a lot of text, which is great for someone like me as I come to comics primarily for the story. But there are so many little things, like the Shadow Stormtroopers under Carnor Jax’ command, that can make fans like myself swoon in delight! (Incidentally, Shadow Stormtroopers and Agent Blackhole will most likely appear in a later blog, as that whole aspect of the Star Wars universe has always intrigued me).

Kir Kanos himself is a really compelling character, as I’ve already alluded to. Being an Imperial Royal Guard, he is one of the elite troopers serving the Emperor, whose loyalty is unwavering. To make him the protagonist of a comic book, let alone an entire series of comic books, was fairly new back in 1997, but it seems now that the concept has been over-done. The only other convincing tale that I have read in this vein is also by Randy Stradley – that of Janek “Tank” Sunber (the subject of yet another upcoming blog!), with Stradley writing under the pseudonym of Welles Hartley. Kanos is not a sympathetic character, as he is out simply for revenge on those he deems responsible for the Emperor’s death. Despite throwing in his lot with the New Republic, he does so only to further his own ends, and refuses to co-operate [SPOILER!] when he kills Carnor Jax [/SPOILER!]. There is, however, that honour and nobility about him, as he refuses to sway from his duty to avenge the Emperor and yet does not attack the New Republic folks he meets, which I suppose is crucial for his appeal to the readership. His vigilante-like activity, coupled with the artwork, actually reminded me almost of some sort of Clint Eastwood storyline!

Crimson Empire itself spawned two sequels. Crimson Empire II: Council of Blood came out from November ’98 to April ’99 and was notable, among other reasons, for introducing the character of Nom Anor, who would be taken over for an entirely different purpose by Del Rey’s New Jedi Order later in 1999. The third book, Crimson Empire III: Empire Lost was shelved for years before finally being released between October 2011 and April 2012. The stories follow Kir Kanos as he continues his revenge against those responsible for the Emperor’s death, first with the Ruling Council, then Luke Skywalker.

I’ve only read CE2 once, and have not actually read CE3, so will provide updates as and when I get to them. Crimson Empire itself, however, is such a huge part of my Star Wars life that it really deserves its own blog!

In addition to the three story arcs, three shorter comics have also been published, more like tie-ins to the main storyline. First of all, The Bounty Hunters: Kenix Kil came in October 1999 and explained why Kir Kanos is masquerading as a bounty hunter at the beginning of Council of Blood. Hard Currency came out in March 2000 when CE3 didn’t look too far off, then Third Time Pays for All came out in April 2011 as more of an official prequel to the third installment. All of these tales have been collected together into the beautiful hardback edition of The Crimson Empire Saga, which I can definitely recommend to folks who would like to see what all this fuss is about!

For people who have never picked up a Star Wars comic before, I cannot recommend Crimson Empire enough.

(As always, the artwork used in this blog is not my personal property, but is used for illustrative purposes. Please let me know if you own it and do not wish it used in this manner)

One thought on “Crimson Empire”