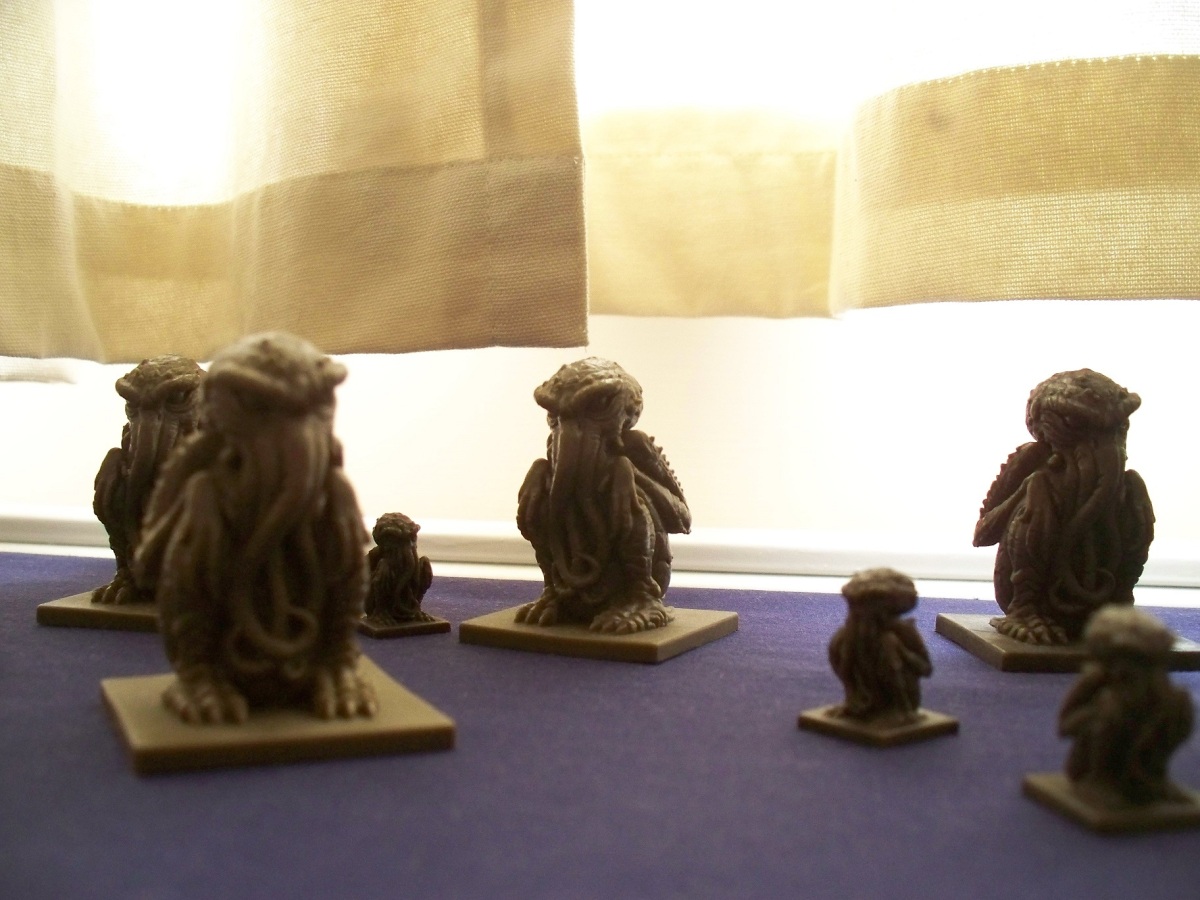 Hey folks! Welcome back! It’s Tuesday, which can only mean one thing – yep, that’s right, time for me to put another of my favourite board games on show! This week sees the turn of another of Fantasy Flight’s Living Card Games (LCG), The Call of Cthulhu! 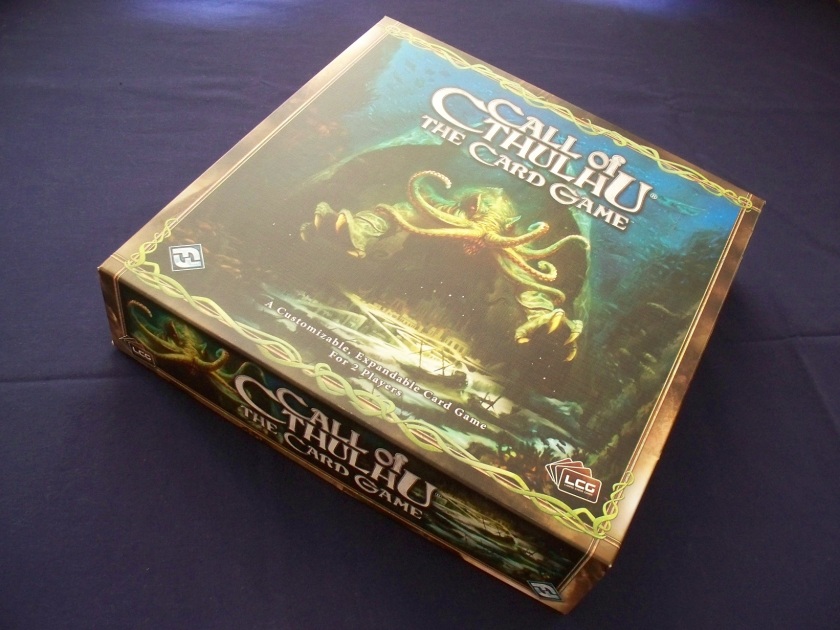 Somewhat based on the HP Lovecraft short story of the same name, it is a card game for two players, where you control factions from the Cthulhu mythos as you struggle to win stories – the first person to win three stories wins the game. Now, you may have discovered, in reading these blogs over the past few weeks, that I am something of a Lovecraft nerd, and furthermore, I really enjoy board games based on Lovecraft’s work. However, I did hesitate a bit about doing a blog on this game, because I’m hardly an expert at it (my stats on boardgamegeek tell me I’ve only actually played it nine times, although that is more than I’ve played the Star Wars LCG…) But, I really like this game. And this is my blog, so I’m just gonna talk about whatever I want! So anyway.

There are eight mythos factions that you can play – seven in the base game, and the eighth released in a deluxe expansion after the fact. As described in the Star Wars blog linked earlier, a LCG is released in waves of six-pack cycles – for Call of Cthulhu, these are called Asylum packs, fittingly. Call of Cthulhu became the first Fantasy Flight LCG to stop releasing small pack expansions back in October 2012, instead moving to the release of one deluxe expansion every four months. While initially, fans of the game feared that this move would spell the end of the game, so far those fears have proven unfounded, as four deluxe expansions have been released since the announcement, with a fifth recently added to the upcoming list, and no end in sight. Anyhow.

The eight factions are roughly divisible between good and evil, reflected in a couple of in-game mechanics such as cards with ‘Heroic’ or ‘Villainous’ traits. However, this is not really a balanced universe, much like Lovecraft’s own work, where the boundaries between good and evil are so very blurry. The Agency and Miskatonic University are both pretty obvious good-side factions, and the four Mythos factions of Cthulhu, Hastur, Shub-Niggurath and Yog Sothoth, are all very much on the evil side. The other two, The Syndicate and The Order of the Silver Twilight, are much greyer. Silver Twilight is ostensibly a good faction, but that is a nebulous connection. Syndicate is even more so. 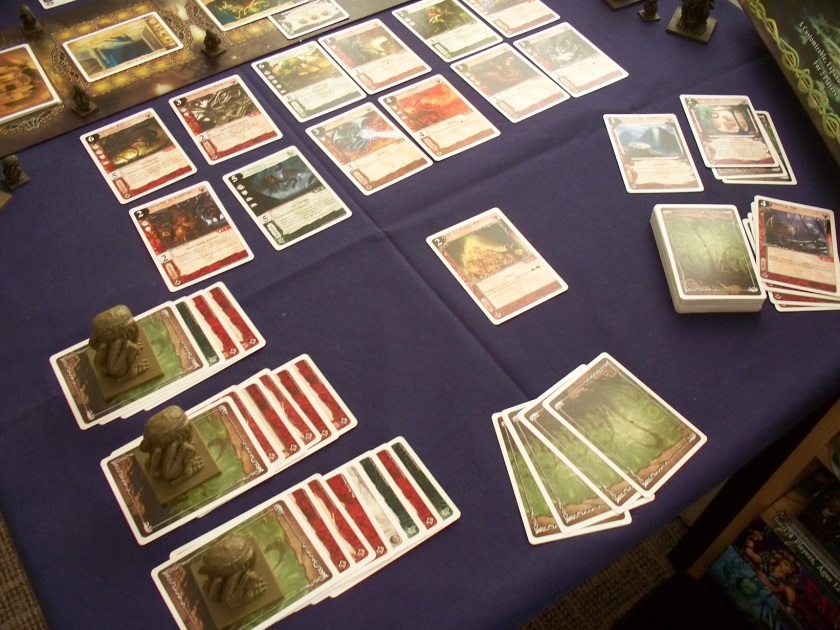 Whenever I play, I tend to include Silver Twilight as often as possible because I love the whole secret-society thing. For illustrative purposes here, I’m playing Silver Twilight/Hastur vs Cthulhu/Shub-Niggurath  – deckbuilding in this game is encouraged to mix two factions, though as much as possible good and evil factions are separated – Heroic and Villainous cards cannot be on the same side at the same time, but that doesn’t preclude a Miskatonic/Yog Sothoth deck, for instance.

I play all of the Fantasy Flight LCGs (when I get the opportunity!), and something I particularly enjoy is seeing the similarities and differences between them all. Here, something that is really innovative, I find, is the resourcing system. In most games, resources are built up automatically each round, and are often kept track of with tokens. Here, however, the very cards in your deck become resources! Each card has the faction symbol on the top and the bottom – at the start of your turn, you can choose a card from your hand to convert into a resource, removing it from the game and placing it upside-down under one of three face-down cards that form your domains (seen at the bottom of the picture, above). Players can sometimes gain more domains in the course of the game, but generally they have three, in each of which they place cards to build up their economy. Card costs, printed on the top left of the card, must be met by the number of cards in a single domain. It’s really quite ingenious, and can lead to some pretty agonizing decisions over the course of a game – you’re almost encouraged to “waste” space in your deck by putting in cards for the express purpose of resources, or else you’ll find you have to use precious cards as resources in order to play the game. Fantasy Flight have very recently put together a very astute pair of articles on this precise gameplay dilemma, as it appears to be something that new players really struggle to cope with – here’s part one, and part two is here.

As well as faction cards, there are also neutral cards that can find their way into any deck. Something that I found early on was that each faction is definitely good at something, sometimes to the exclusion of anything else. Neutral cards can therefore help to bulk out your strategy by adding in some of the blanks.

As I said above, the game is played by two players fighting over story cards, which are arrayed on a small board across the centre of the table. Each story card has four “struggles” along the side of it, and the person who has the most matching icons at each of the four struggles triggers specific effects. Players commit characters to story struggles by ‘exhausting’ them, which basically means turning the card on its side. During the Terror struggle, the person who loses must drive one of his characters insane, removing them from that story. During the Combat struggle, the person who loses must choose one of his characters to take a wound, which more often than not destroys that character. The winner at the Arcane struggle can ready a character, and the winner of the Investigation struggle can immediately add a success token to the story card. After this, the characters remaining at that story have their skill values tallied, and the person with the most skill adds a success token to that story. If you have successfully driven off all of your opponent’s characters, or if no opposing characters were committed, you get to place an additional success token. Stories need five successes to be won, but as you can see, you can potentially place three successes in one round.

Once a story card has been won, the victor has the option of triggering the one-time effect on that card. These effects range from universally beneficial to universally damaging, so a player can choose not to trigger them if he so wishes. In a nutshell, that is how the game works, so it’s really quite straightforward, but as one of the longest-running LCGs in Fantasy Flight’s stable, there have been a whole slew of new mechanics released since the base game came out in 2009. All sorts of tricks can be played to skew the advantage to your side, such as the card shown attached to the central story, above – forcing three additional terror struggles to be resolved at that story each round!

On the face of it, it is such a simple game – throw characters at stories, resolve conflicts, and try to win those stories. However, perhaps because of its longevity, there are now so many little bits and pieces going on that you have a truly immersive experience when you play this game. That said, the game has always had subtlety from very beginning, and this has only been amplified over time, to create one of the greatest of all card games. Perhaps because of that depth, however, it doesn’t find its way to the table for me all that often. I stress again, it’s not a difficult game, it’s just a complex game (there is a distinction there, trust me!) But as such, it doesn’t lend itself well to “fancy a quick and easy game?” situations. Which is a shame, because it is an unjustly neglected masterpiece of the LCG world. Aside from the fact that the art on these cards can be absolutely amazing at times, I often find myself building decks just for the sheer joy of seeing how all the cards could possibly interact, unsure precisely when I’m going to get to play it again.

There is so much that I like about this game, I just cannot recommend it enough! It’s just wonderful! I have to say, as well, I really applaud the direction that Fantasy Flight has taken with the distribution model. While I didn’t hate the asylum packs, it can mean a massive gaming budget each month with so much new stuff coming out. As it is, the deluxe expansions they have released have really drawn together a much more thematic feel to them. In two broad categories, we have so far seen a pattern of two boxes each devoted to a specific faction, followed then by a more thematic box with a spread of cards for each faction. While I would definitely recommend picking up the asylum packs if you can pick them up, you can really have an awesome time just with the base game and the deluxe boxes – heck, you can have an amazing gaming experience with just the base game! 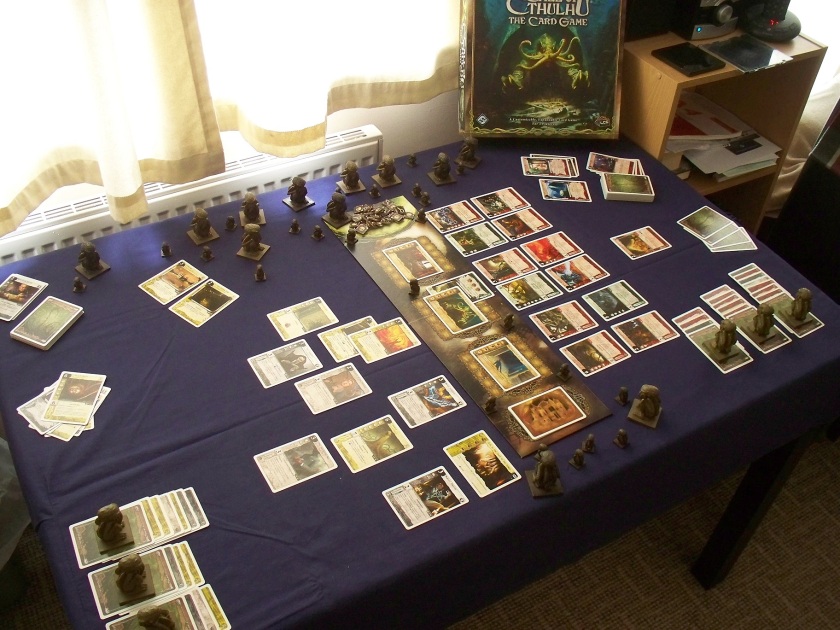 Buy it from amazon:
Call of Cthulhu LCG
Secrets of Arkham – cards for all 7 factions, plus a new Story deck
The Order of the Silver Twilight – adds the game’s 8th faction
The Shifting Sands – an asylum pack that adds a third Story deck
Seekers of Knowledge – focusing on Miskatonic University
The Key and the Gate – focusing on Yog Sothoth
Terror in Venice – the pleasures of the Carnevale!
Denizens of the Underworld – focusing on The Syndicate
The Sleeper Below – focusing on Cthulhu

One thought on “He’s Calling Again!”