It’s Sunday! You know what that means… well, I’m not quite sure where that is going, but it’s Sunday! And it’s the middle of the three-day-weekend! So I thought it might be nice to go for a bit of a feature-Sunday here (this probably won’t become a thing, but you never know!)

So, after my blog on the Dark Empire series, I’ve been feeling pretty bummed out. I think, more than anything, I feel like I’ve let myself down by being so derisive of what is often seen as a modern classic. It’s tantamount to blasphemy, almost! But anyway. I thought today I’d talk about another classic of the early years of Dark Horse comics publishing of Star Wars, the Tales of the Jedi saga. I’m quite the fan of these books, and read them fairly often, most recently in Feb/March this year, just outside the scope of this blog, hence I suppose why I’m writing this now. Anyway! 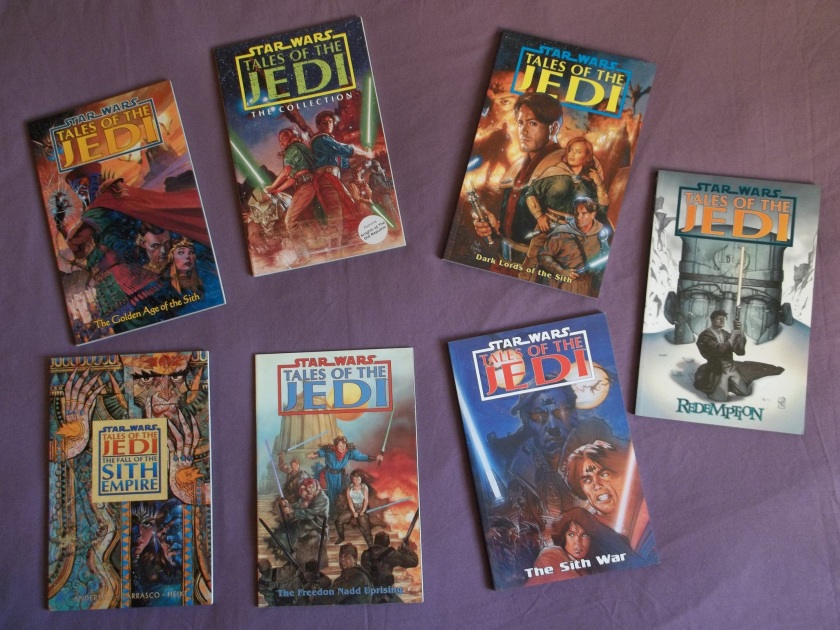 Tales of the Jedi began back in the 80s, when Tom Veitch was pitching ideas for Star Wars comics to Lucasfilm. Initially refused, on the grounds that the franchise wasn’t going anywhere, it was only after the success of Dark Empire that the team managed to get some renewed interest in the idea. George Lucas himself apparently got very interested in the idea of a comic series set 4000 years before the film trilogy, and personally approved the storylines for each.

Beginning in October 1993 with Ulic Qel-Droma and the Beast Wars of Onderon, the series would eventually run to 35 comics that told the whole story of Ulic from his days as a padawan, through his fall to the Dark Side, and his eventual redemption, alongside that of the unwilling Jedi, Nomi Sunrider. Further issues would explore even further back in the mythic past of the Jedi and the Sith. A year after the Onderon story began, the next arc of the saga came out, Dark Lords of the Sith. Opening the universe still further with the Jedi enclave on Dantooine, we are introduced here to the Jedi Exar Kun, who would fall to the Dark Side and unleash the terrible Sith War on the galaxy. Dark Lords of the Sith added the author Kevin J Anderson to the production team, who was currently working on his Jedi Academy trilogy of novels that dealt with the spirit of Exar Kun trapped on Yavin IV. With the comic series, Anderson was able to tell the backstory on this, slotting in his ideas neatly with Veitch’s, to create more of a homogeneous feel to the universe. Despite Veitch’s departure from the project before the end, the series was brought to a suitable conclusion at the beginning of 1996 in The Sith War, before Anderson launched into a prequel story set 1000 years before the saga of Ulic, The Golden Age of the Sith. This was a universe still being discovered, where ancient Sith Lords were more like mad alchemical scientists. Featuring stories around Naga Sadow and Ludo Kressh, as well as Empress Teta and the Great Hyperspace War, not to mention lightsabers that came with backpack power generators, the universe really does feel like a mythic past in this and the following arc, The Fall of the Sith Empire, which concluded late in 1997. Finally, in summer 1998, the saga of Ulic Qel-Droma began its conclusion with the emotionally-charged Redemption arc. In a series spanning five years, the Tales of the Jedi finally reached their conclusion.

I really enjoyed this series. The core of the saga, which follows Ulic on his journey from Jedi apprentice to Sith apprentice, through being stripped of his Force powers and finally to his redemption, is really nicely done. Despite the fact that Ulic falls to the Dark Side in a misguided attempt to learn its secrets and thus to defeat it from within, I still think this is a much better tale than that eventually told by the Star Wars prequel movies. It’s also a lot better than the execution in Dark Empire of Luke’s fall, but I won’t go over that again.

There are all sorts of things in these ‘early’ stories, perhaps most notably the idea that anyone can be trained to use the Force, back when the idea appeared to be more in terms of a mystical religion than a biological phenomenon. Satal Keto and his cousin Aleema are described as “bored aristocrats” with no particular affinity for the Force, and yet through the power of the Sith amulets they find, they are able to control the mystical energy field. Hm. Personally, I prefer this view as being much more, well, sensible. But anyway.

The key to success with any Star Wars story, for me, lies firmly between boldly-drawn characters and epic situations, and the whole saga has that. Even what are, I suppose, the bit-players are really compelling characters, including Shoaneb Culu, the first Miraluka to appear in the universe (perhaps more famous examples include Jerec from Dark Forces, and Visas Marr from KOTOR2). The series is made increasingly rich as we follow first Ulic and then Nomi on their very different paths through the Jedi way. From the beginning, we have incredibly compelling situations, as Ulic, his brother Cay, and the Twi’lek Tott Doneeta travel to Onderon to help mediate in the Beast Wars. Some epic storytelling, including incredible reversals, launches the galaxy-spanning epic. By the time we’re introduced to Exar Kun, the figures of Ulic Qel-Droma and his companions already have something of a celebrity feel about them. By the end of the series, we feel like we know these characters as well as the films of the original trilogy.

I don’t often mention the art when I’ve looked at comic books in the past, largely because I’m not really that much of a connoisseur. However, I have to say that I absolutely love the art of Christian Gossett, who drew most of the Dark Lords of the Sith arc, and whose art was, for many years for me, synonymous with Star Wars comics.

Of course, having grown up with the Bantam books, and the Jedi Academy trilogy were among the first that I’d read, when I eventually got into the comics and started to read these stories, they really were like reading the long-lost history of the galaxy. Reading about Exar Kun’s exploits when I’d only previously known him as a disembodied spirit wreaking havoc on Yavin IV, that was particularly gratifying. Somehow, the names of these characters and locations have a mythic feel to them, too – Ulic Qel-Droma, Nomi Sunrider, Arca Jeth, Vodo Siosk-Baas, Satal Keto, Freedon Nadd, and of course, Exar Kun himself. While we have the classic Yavin IV location, which explains what those jungle temples the Rebel Alliance were using were all about, we also visit Dantooine, but also have new locations such as Onderon and the Dxun Moon, the Jedi training centre on Ossus, and the Sith ‘homeworld’ of Korriban. All of these things are so intrinsically part of Star Wars lore that I can’t help but feel like it’s part of something really special.

Aside from the Jedi Academy trilogy, the events and situations were most strongly referenced in the later Dark Empire stories, where Leia takes refuge on Onderon to escape the Emperor’s attempted kidnapping of her son Anakin. In later media, the novel Darth Bane: Rule of Two features a trip to Onderon in a sort of pilgrimage to find the tomb of Freedon Nadd. The Sith stronghold of Ziost plays a significant part in the Legacy of the Force novel series, while Korriban, as a sacred world to the Sith Order, features strongly in pretty much any story where the Sith are prominent, either by name or an actual appearance. Perhaps the greatest homage was paid by Lucas himself, however, when he modeled Darth Maul’s twin-bladed lightsaber on that of Exar Kun.

Before the advent of BioWare’s Knights of the Old Republic reinvigorated interest in the ancient history of the Star Wars universe, Tales of the Jedi sat apart from the rest of the canon, which centred around the original trilogy and, as the prequels came out, ventured no further into the past than forty or fifty years before A New Hope. But now, there’s all sorts of stuff going on at that end of the timeline, including even earlier stories, Dawn of the Jedi.

It’s a really great series of comics, and I can heartily recommend you take a look!

6 thoughts on “Tales of the Jedi”