Today, I thought it would be cool to dig back a little into the past of Star Wars, and showcase the Dark Lord of the Sith who started that sinister brotherhood on the path to galactic dominion, through a couple of stories that I first read earlier this year. 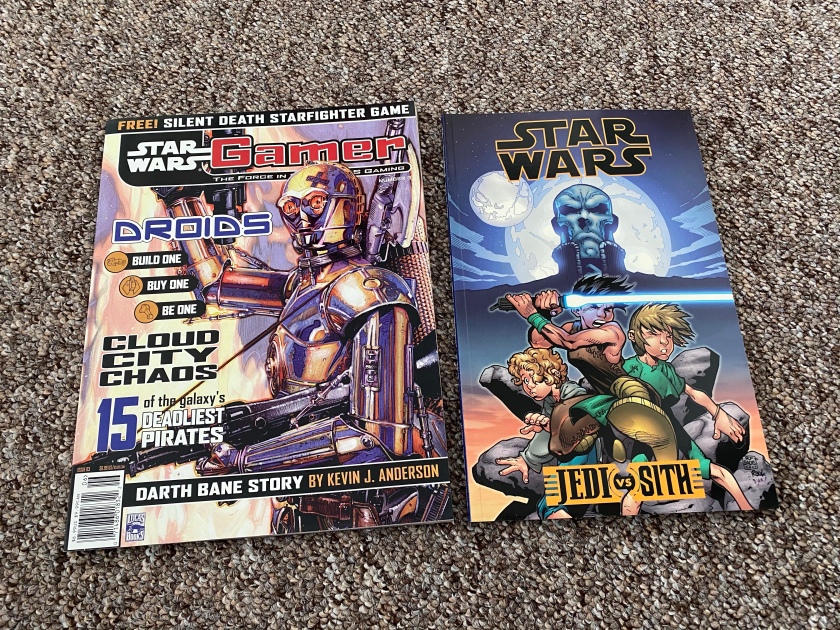 Darth Bane was first created for the back story of The Phantom Menace, although he was never mentioned by name in the film. When Yoda tells Mace Windu, “Always two there are; no more, no less. A Master and an Apprentice”, he was explaining Darth Bane’s core tenet of the so-called Rule of Two. This has all since been explored through Drew Karpyshyn’s novel trilogy, a trilogy that I still need to make the time to read, but the story of Darth Bane’s beginnings as a Sith Lord were originally narrated in graphic novel and short story form – Bane of the Sith, and Jedi vs Sith.

Bane of the Sith was published in January 2001 and was written by Kevin J Anderson. Interestingly, this was to be the last story KJA wrote in the Star Wars universe. It shows Bane in the aftermath of the Battle of Ruusan, fleeing the disaster and the decimation of the Sith by Lord Kaan’s “thought bomb”, though doesn’t really give us much more to go on. Bane arrives on Dxun, the beast moon in orbit around Onderon, where he is first taunted by the spirit of his former teacher Lord Qordis, before being led to the tomb of Freedon Nadd by the spirit of Lord Kaan himself. Kaan leads him to a chamber of the tomb wherein the holocron of Freedon Nadd resides, although the chamber is covered in crustacean-like creatures called orbalisks, two of which latch on to Bane and form a symbiotic relationship of dark power with him. After studying the holocron, Bane is able to use the Dark Side to control one of the flying beasts to ride to Onderon, where he plans to begin his search for an apprentice.

While it doesn’t really matter now, I suppose it must have been quite odd back in 2001 to read this in the January, which serves as a sequel to the comic series Jedi vs Sith, which wasn’t published until that April.

The comic book tells the story of three young cousins, Rain, Bug and Tomcat, as they each take very different paths in learning to use their Force abilities, all set against the Battle of Ruusan. We don’t really know much about this battle, to tell the truth, as the story mainly focuses on Tomcat as he rushes headlong into the conflict and falls to the Dark Side, pairing up with Githany who appears to have once been a Jedi but is now a Sith (and wields a lightwhip, as a point of interest). Bug first appears to be the more brash cousin, but his humility when among the Jedi camp sees him stick to the Light. Rain is initially depicted as the weaker of the three (because she’s a girl? Not sure on that one) and is separated from the other two – presumed dead, she is rescued by Ruusan’s native ‘bouncers’ – green floating balls with empathic abilities.

Somewhere in the background, we have Lord Kaan of the Sith, leader of the Brotherhood of Darkness, who seems to go mad as he attempts to wipe out the Jedi through the use of a “thought bomb”, a ritual that is supposed to drain the strongest Force users of their life. Only problem is, he can’t control it, and ends up wiping out the Brotherhood as well as Lord Hoth and the Army of Light.

The only Sith Lord to survive is Darth Bane, who happens across Rain after she has killed two Jedi in retaliation for them shooting down one of the bouncers. They come across Tomcat, who tries to attack Bane, but his cousin destroys his hand to defend her new master.

The series ends with Tomcat deciding to live life simply as a man, neither Jedi nor Sith.

It’s a weird one, I have to say! The fact we get no background on the war, and nothing really on Darth Bane either, leaves me wondering just what it is that I’ve read! The book seems to jump around a lot, and I can’t help but wonder whether, had I been reading this back in 2001, I would have expected more stories about the war, and to read more in general about this time period.

Definitely could have been better, but it’s nice to finally tick this one off the list!