Well, good people of the internet, it’s finally here! It’s nearly two months since I nearly burst several blood vessels in my excitement over the discovery of a Street Fighter card game, and lo! it has finally arrived in my hot little hands this very day! Oh, I am very excited! The game is published by Cryptozoic, who have done quite a few deck-builders now, including the popular DC game, and 3012, one of their early efforts that I feel is greatly overlooked.

A deck-building game? I hear you cry. Well, yes – a card game where you basically build your deck as you play the game. I think it was Dominion that started the trend, and my own game collection includes quite a few of these, such as Thunderstone and Marvel Legendary. Each game is broadly the same principle – you start off with a basic hand of cards, which you use to buy better cards, and thus the game moves on. There are often many twists, as it can otherwise be a pretty boring thing (one of the biggest criticisms of Dominion, from what I’ve heard). Thunderstone, for example, involves some dungeon-delving, and both the DC and Marvel games involve powering-up your deck in order to take on super villains and win the game. While there are very few games that I could say I dislike, the whole deck-building genre is something that I can usually take or leave.

As a kid, I was never all that into video games, but Street Fighter was one of these cult events that I can always make an exception for! Not that I played it that much, but still, it was a part of my childhood that I fondly remember – ahhh! The Street Fighter card game was therefore an insta-buy for me, and when I got home this afternoon to find it waiting on my doormat, oh, the joy begins!

The game is played very similar to the DC game, as both use the ‘Cerberus Engine’ (a game engine is just another name for the mechanics). You have a starting hand of fairly weak cards, with additional cards available to purchase, some (like the Kick cards) are in a stack to the side and available until that stack runs out; the rest form the ‘main deck’, and comprise Heroes, Villains, Equipment and Superpowers. Unlike in DC, Location cards form a ‘Stage’ deck, also to the side. This deck effectively replaces the Super Villains in the DC game, and acts as a sort of timer, that tracks the game’s progress. There are 14 oversized Super Hero cards, as in DC, but the neat little twist here is that, once the players have chosen their Super Hero for the game, the remainder act as ‘Stage Bosses’, which you must defeat in order to gain the current Location in the Stage deck – when the Stage deck runs out, the game is over. Also unlike DC, the Super Heroes don’t have a printed ability to use throughout the game, but instead a ‘Counter Attack’, which is resolved when you’re defeating the Super Hero in its Stage Boss appearance (and is analogous to the First Appearance – Attack that the DC Super Villains have). I thought that was pretty cool, anyway! Each location corresponds to a level in the video game, and the card art uses the same graphics that the video game used for the backdrop to the fighting. Nice!

While the Super Heroes don’t have any printed abilities of their own, there is a new type of card added to this game, ‘Ultra’ cards. These are similar to the characters’ special moves in the video game, and at the beginning of the game are placed under the Super Hero card. As the game progresses, you have the option of buying the Ultra card as you would a card from the main deck lineup. Some cards in the main deck have either attacks, which allow you to attack other players, or defense, which allows you to defend against attacks from other players or from the Stage Bosses. Ultra cards, however, have both attacks and defenses, and can be used for either purpose.

I do enjoy the DC game, and have frequently played it solo to try to get the best possible score, or to defeat the Super Villains in a set amount of turns. Most deck building games can be played in this way, though very few are all that satisfying. Street Fighter, however, begs to be played with more players, due to the amount of attack cards.

I do love Street Fighter. I tried this game out solo earlier today to get a feel for it, and that level of interactivity was something that was definitely missing from the game. However, I can definitely see how this game would be awesome with more players! 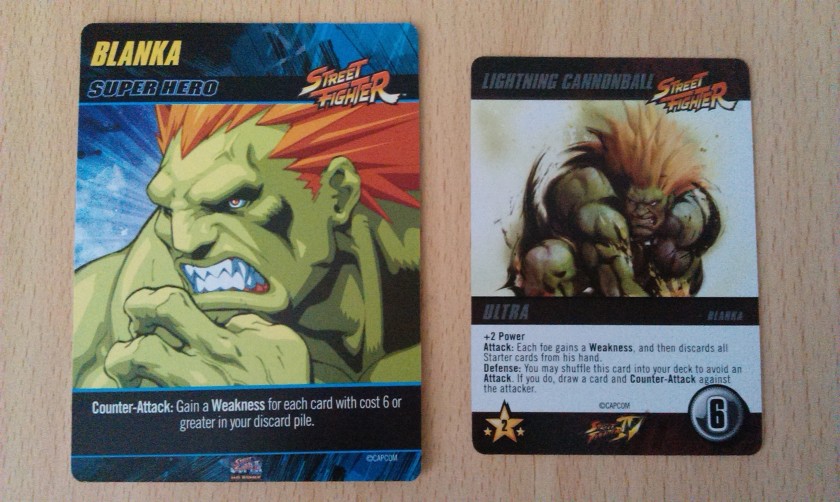 But let’s talk about promo cards for a minute. Many companies produce promo cards to promote their games at organized play events, and Cryptozoic is one of them. However, while that is a very noble cause, and a wonderful idea, promo cards often become so sought-after that it can become a serious problem. And Cryptozoic promo cards are some of the very worst for this. For the DC game, they produced a promo Super Hero, Martian Manhunter. I don’t go to game events, as I can’t justify the travel expenses. So instead I spent more money buying the promo card on the aftermarket than I had done on the game itself. An expansion for DC was released this year, Heroes Unite, which has two promos associated with it. I was one of the lucky ones to get my copy shipped with one, but spent as much as I’d spent on the game buying the second promo card. It becomes an untenable situation, and one that has, time and again, made me question whether I can continue to support the publisher’s games.

See, I’m an obsessive completist, as many gamers are, and cannot abide to think of having an ‘incomplete’ game. And this is where the problem lies. One of my favourite publishers, Flying Frog Productions, insist that they would never produce a promo that altered the gameplay of any of their products, so have produced maybe a handful that are strictly alternate-art cards for their games, which often ship with their web-exclusive mini expansions. I have no problem in supporting a company by buying their content directly from them, especially if I’m going to get a nice little promo into the bargain! My favourite publisher, Fantasy Flight Games, produce alternate cards as promos for game events, but never produce actual promo cards. And this is how it should be, in my view. Promo cards should not be additional content, but variants to the main game. Yes, you can play DC without Martian Manhunter, but that doesn’t stop the fact that there are more heroes out there that you can play with if you’re willing to part with the money. You can play Street Fighter without Blanka, but that doesn’t stop the fact that he’s out there, and can be yours for more than the price of the actual base game itself.

It’s time game companies stopped supporting this shady aftermarket by producing what are essentially mini expansions as promo material. Anything game-changing deserves to have a wider audience than just for those with wallets big enough to pay the exorbitant prices eBay sellers charge. Take a stand with me!

(Yes, I’ve purposefully stayed away from mentioning Wizards of the Coast, who are perhaps the very worst offenders for promos. All I will say on this subject is – thank goodness the Star Wars game license no longer resides with them!)

But enough of my rant. I’m off to write some more essay. I’ll end with a quote from a favourite web personality of mine: Until next time – play more games!